Introduction
The intern year in Ireland is a one-year period of pre-registration structured clinical training immediately following graduation from medical school. Upon completion, trainees are provided a certificate of experience, entitling them to automatic registration in all EU countries1. The transition from medical student to intern can be difficult, not least because interns begin to assume some clinical responsibility. Previous studies have demonstrated that this transition is made difficult by the lack of protected time for education, insufficient feedback on performance and deficiencies in the way undergraduate training prepares them for internship2,3. Irish studies undertaken in 1996, 2003, 2005 and two studies in 2012 have demonstrated that 9%, 68%, 38%, 49% and 52% of new interns felt prepared entering the intern year2-5. This increase over the years could be attributed to the establishment of Intern Training Networks and a National Intern Training Programme in 2009/2010 and changes to the undergraduate curriculum6. The most recent report on the topic demonstrated that interns felt least prepared for clinical procedures and administrative tasks, while more confident in their clinical knowledge7. One factor, which may influence perceptions of preparedness for internship, is the degree to which medical students understand what the intern year entails. Our study aimed to evaluate medical students` understanding of the intern year and the factors associated with the level of understanding after concerns were raised in an Irish national survey of interns4.

Methods
An online cross-sectional survey was distributed to all medical students studying in Ireland via an online survey tool (Survey Monkey v. March 28, 2012 http://www.surveymonkey.net) with the help of medical school administrators. A reminder email was sent out to all students two weeks later and the survey remained open for a total of four weeks. The questionnaire applied Likert scale responses to a set of statements which aimed to elicit the degree to which understanding of postgraduate training in Ireland was associated with migration intentions, respondents’ understanding of the intern year and subsequent career plans. Pearson’s Chi-square was utilised to determine the significance of differences in responses to questions. SPSS v.20 was used for data analysis. The questionnaire asked respondents to rate their agreement/disagreement to the following statement: “I understand what the intern year after graduation entails” In addition, age, gender and nationality were also obtained. Location of secondary school was used as a proxy for citizenship, as it highlights the demographics we are interested in. Ethical approval was granted by the College of Medicine Nursing and Health Sciences Research Ethics Committee at the National University of Ireland, Galway.

Response rate
The survey was administered electronically to 6,180 students enrolled in a recognised medical course in one of Ireland six medical school in January 2013 of whom 2,273 (37%) responded, and 2248 responded to questions regarding their understanding of the intern year. 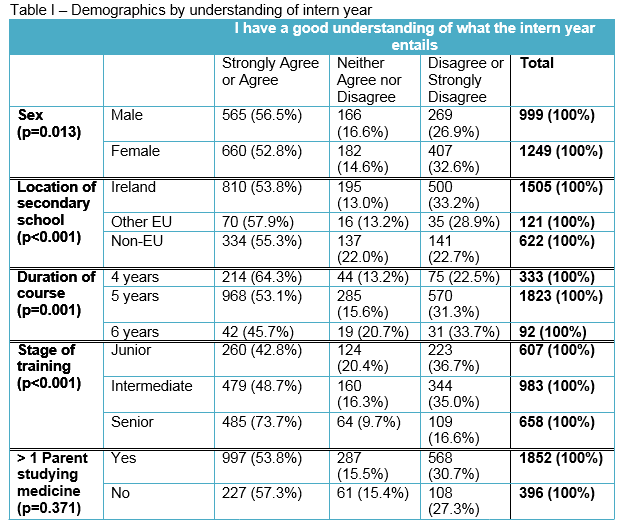 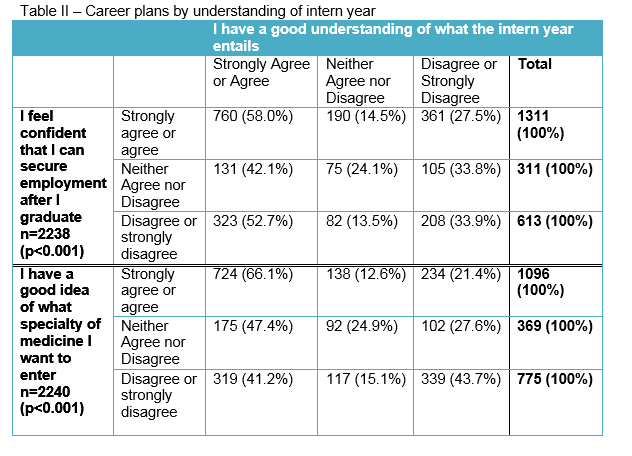 The issue of medical graduates lack of preparedness is not unique to Ireland with similar situations described among senior medical students in the UK and New Zealand9,10. Studies in the UK have demonstrated the effectiveness of initiatives at the medical school level in preparing students for postgraduate training. While only 36% of graduates from 1999 and 2000 felt their medical school had prepared them well, this increased to 58% among graduates of 200511.

However a survey of 700 medical gradautes established that despite overall rising confidence, gradautes still felt poorly prepared for prescribing and execuring some practical procedures which would be expected of them as interns12. Concerns regarding prescribing preparedness have also been identified in the Irish context13. So while medical students may percieve themselves to be prepared for the intern year, this may not be true in specific technical aspects of the role of an intern, such as perscribing skills. A study in the UK showed that junior doctors were aware or their prescribing errors, yet still remained confident in their perscribing skills14,15. Factors influencing perscribing errors and competence are multifactorial and complex and warrant early intervention in the undergraduate medical curriuculum16.

One initiative in Ireland, at the local level, to improve preparedness of new graduates for the challenges of the intern year has been the creation of a four week intern-training programme that covered clinical and technical skills as well as a four day shadowing experience. An evaluation of this programme revealed that prior to commencement, students were least prepared for technical aspects of the intern year such as medication prescribing, decision making ability and managing an emergency5. Student’s perception of being prepared rose from 43% precourse to 96% postcourse for medication prescription, 31% to 53% for decision-making ability and 12% to 26% for managing anemergency. For logistical reasons an additional four week training programme may not be feasible for all intern training programmes. The option however of more active involvement of senior medical students in clinical practice could also be considered. The approach of requiring senior medical students to assume clinical responsibility under close supervision has proven to be very effective in optimising their learning and preparedness for practice17,18.

Interestingly, our study suggests that students that had a better idea of what speciality they were interested in also perceived a better understanding of the intern year. This suggests that initiatives at the undergraduate level to increase understanding of career opportunities may also be an opportune moment to discuss training pathways, what each stage of training entails and should actively engage students in the process. In addition, we see that graduate entrants have perceived a better understanding of the intern year. This may due the significant variations in motivation and attitudes prior to enrolling in the medical degree19,20. Encouraging medical students to actively engage in career planning activities at the undergraduate stage may act as a trigger for self-directed learning, giving them a better idea of what is involved in postgraduate training.

While our study describes student perception of preparedness for the intern year in the largest survey of medical students Ireland, there are several limitations that must be taken into account. There was no correction applied in our statistical analysis for multiple comparisons so apparent associations should be analysed with caution. In addition, we describe student perceptions of preparedness, which in itself is not the same as being prepared. Future studies should aim to elicit both perception of preparedness before starting the intern year and actual preparedness shortly after beginning the intern year. While we report a 37% response rate, lower than previous studies, our study reports the largest survey of medical students in Ireland to date. However, the possibility of non-responder bias remains. The increase in survey research targeting medical students may also be responsible for survey fatigue. School administrators may need to begin to prioritise research opportunities for their students to be involved in.

The progression from medical student to internship can be stressful and can potentially be associated with medical error.21 Our study has demonstrated in a large sample of Irish medical students that understanding of the first stages of postgraduate medical training in Ireland is comparable with medical students in other jurisdictions. While self-reporting of preparedness is a potential limitation, it is accepted that perceptions of ability are predictors of behaviour and therefore it is a valid approach22.

It is inevitable that learning on the job will occur, however a key function of all the medical undergraduate curricula is ensuring optimal preparedness for practice. Although the overall majority of medical students perceive themselves to be prepared for the intern year, efforts to continue improving medical student knowledge of the intern year should be considered. These initiatives may take the form of increased intern shadowing, the development of web based material and the delegation of selected clinical responsibilities to senior medical students under appropriate supervision. Future research and intervention should involve all stakeholders including medical school, postgraduate training programs and medical students.

23.Bandura A. Social foundations of thought and action. Prentice Hall; 1986. 1