Over the past decade, several European countries have struggled with the ability of creating a sustainable general practitioner (GP) workforce. In Ireland, it has been projected that the supply of GPs will be 5.7% less than required by 20211. The National Doctors Training and Planning Unit estimate that by 2025, the predicted shortage of general practitioners will range from 493 to 1,380.  Compounding this stark prediction is that Ireland already has one of the lowest ratios of general practitioners per capita in Europe2. In addition, 13.2% of Irish general practitioners are currently over the age of 65 and a third of the GP workforce are international medical graduates, which is one of the highest in the OECD3.

The Vasco da Gama Movement (VdGM) is the WONCA Europe Network for new and future general practitioners and their second annual Forum was held in Dublin on 20th and 21st February 2015. The theme of the conference was Family Medicine 2.0: Innovation and Awareness. In an effort to promote student involvement at the conference, interested medical students were invited to collaborate on a research project that fitted with the theme of the conference. Student investigators agreed to investigate student and general practitioners perceptions of challenges in general practice.

An exploratory, cross sectional study employing an online survey collection tool (Survey Monkey) was designed that was piloted on 10 medical students to ensure survey competency. Survey invitation was facilitated by an email from school administrators at the National University of Ireland, Galway. In addition, participants from the VdGM Forum were invited to participate via an email from a conference coordinator that included the survey link. The survey was released at the start of the conference and remained open for 2 weeks.

Scalar variables are described as mean +/- standard deviation. Pearson Chi-square was used to determine association between occupation (student vs general practitioners) and various statements on challenges in general practice. All statistical analysis was conducted by SPSS v.23. Ethical approval for this study was granted be the Research Ethics Committee of the College of Medicine Nursing and Health Science at the National University of Ireland, Galway.

Perception of challenges in general practice

The most frequently identified challenges were access to imaging, where only 17 (13.0%) respondents agreed or strongly agreed that GPs have sufficient access to imaging. In addition, 120 (91.6%) respondents agreed or strongly agreed that the ageing patient population is a challenge and 95 (72.5%) indicated that patients are becoming more complex. Communication with specialists was a major challenge, with only 26 (19.8%) of respondents believing that there was an adequate level of communication. Of medical students, 44 (45.8%) believed that they received adequate exposure to the field of general practice, compared to 9 (25.7%) of GPs. A complete list of perceived challenges can be seen in table 1 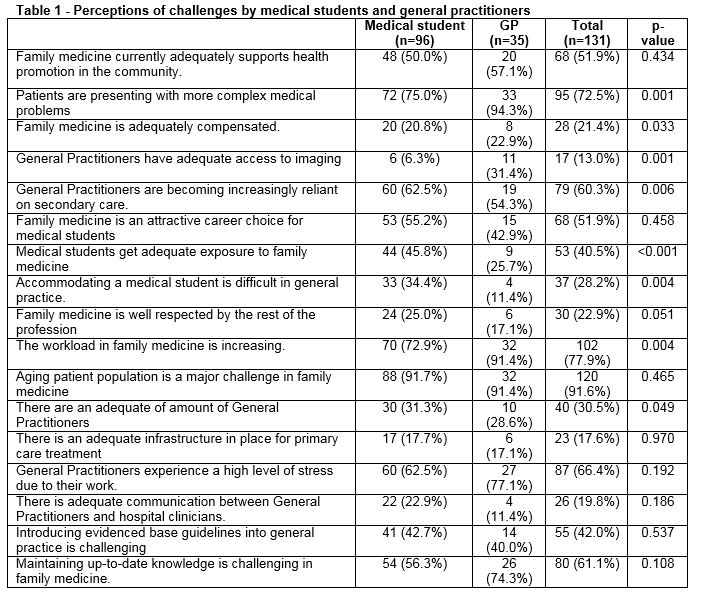 Participants were asked to prioritise the importance of each challenge to them on scale from one to ten, with one being the most important and 10 being the least important. Participants provided the highest priority scores to lack of time in clinic (3.82 +/- 2.75), increased workload (4.08 +/- 2.54) and financial constraints (4.11 +/- 2.44). In the GP cohort, the concept of the complex patients was highly prioritised (3.86 +/- 2.28).

In 2014, there were 2,948 registered general practitioners (GPs) in Ireland. This is equivalent to approximately 64 specialists per 100,000 population. However, when accounting for doctors who practice only in Ireland, this drops to 58.4/100,000. These figures are much lower in rural areas of Ireland6. In addition, 2.9% of those general practitioners registered have been inactive or not practicing in the past 12 months and only 75.4% are working full time. Over the past 2 years, Ireland has seen a relatively small growth in the field of general practice, by 4.1%7.

Challenges in general practices are not unique to Ireland. A survey of Canadian GPs demonstrated that the most common perceived challenges were workload and time pressures, overheads and income inequities with other medical colleagues, and the administrative aspects such as paperwork, phone calls and forms8. Interestingly, only 48% identified access to specialists and imaging was a problem, in comparison our study found where only 13% strongly agreed that there was adequate access to imaging.

To our knowledge this is the first study to describe medical student and GP perceptions of challenges in the field of general practice in Ireland. However, the present study has several limitations. The low response rate (12.4%) poses the significant risk of non-responder bias. In addition, students with an interest in general practice may have been more inclined to participate in the student, leading to the risk of sampling bias. However, our results provide some preliminary data that may be used to direct future research in this field.

Acknowledgements: We would like to thank all the participants who took part in the study and VdGM forum organisers who facilitated the dissemination of the survey.