The incidence of Chlamydia trachomatis (CT) & Neisseria gonorrhoeae (NG) are rising in Ireland.1 Both are often undiagnosed and may cause infertility amongst other complications.2 CT/NG screening is not routinely offered during cervical cancer screening. This study aimed to ascertain the feasibility and acceptability of screening for CT/NG at time of smear and to measure the diagnostic yield. Screening was offered to women aged 25-40 years attending four participating general practices as part of Cervical Check.3 A retrospective review of the three months preceding the study period, indicated that out of 138 smears, CT/NG testing was performed in 10 (7%) of cases. 236 (93%) patients consented to screening for CT/NG. The detection rate for Chlamydia was 6 (2.4%), with no positive results for NG. Feedback from patients was positive. Interestingly, 42 (18%) of participants who completed the questionnaire believed STI screening was already part of the routine smear.

The incidence of Chlamydia trachomatis (CT) & Neisseria gonorrhoeae (NG) are rising in Ireland. Between 2000 and 2014 the annual notifications of CT in Ireland have increased from 1343 to 6707 and GC notifications have risen from 290 to 1336. In 2014 women accounted for 3623 (54%) reported cases of CT and 223 (17%) cases of NG.1 CT is asymptomatic in 85% of women and 40% of men2. CT and NG cause infertility as well as other health complications.2 Screening for CT and NG satisfies Wilson and Jungner’s criteria for screening.4 Nucleic acid amplification tests (NAATs) of endocervical samples remain the gold standard in testing for NG in women, with sensitivity and specificity of 94.2% and 99.2% respectively, compared to 55.6% and 98.7% for NAATs of urine specimens.5 Sensitivity and specificity of NAATs for detecting CT in endocervical specimens is 96.7% and 99.1% respectively, versus 92.5% and 98.6% for urine specimens.5 Screening for CT/NG during cervical screening is clearly of interest. This study aims to ascertain if it is feasible for GPs and acceptable to patients to combine screening for CT/NG with cervical screening, and to measure the diagnostic yield of STI screening, thereby ascertaining if it is worthwhile exploiting the potential health gain at a useful and established point of care relating to sexual health.

Ethical Approval was obtained from Trinity College Dublin HSE GP Training Scheme Ethics Committee. The study was carried out in 4 Teaching Practices (3 urban, 1 suburban) (July 2014 – January 2015). Initially we retrospectively assessed the number of women who underwent opportunistic CT/NG testing in the participating practices at the time of cervical screening in the previous 3 months. The target population for STI screening included all patients aged 25-40 years attending as part of the national cervical screening programme (Cervical Check) over a 6 month period. Uptake and opt out rates were recorded. Women attending for cervical screening were made aware of the study using an information sheet and waiting room notice. This enabled informed consent by advising on the purpose of the study and invitation to decline or participate. Written consent for the study was obtained along with consent for cervical screening. An endocervical swab was performed at time of smear, and forwarded to the National Viral Reference Laboratory. The order in which the swab and cervical smear were taken wasn’t specified. Those who consented to participate filled out a short pre-test and post-test questionnaire illustrated in Figures 1 and 2 respectively.

Patients who tested positive for CT or NG were offered a follow up appointment at the practice free of charge. In those who tested positive for CT, a prescription for 1g of azithromycin was given and contact tracing for partners was provided. Regular partners of those who tested positive were offered treatment regardless of their own test results. Patients testing positive for NG were to be referred to the Department of Genitourinary Medicine and Infectious Diseases (GUIDE) Clinic at St James’s Hospital Dublin for intramuscular (IM) ceftriaxone treatment and culture. All patients testing positive for CT or NG were recommended to have additional screening performed (syphilis / human immunodeficiency virus (HIV) / and Hepatitis B), at either the practice or the GUIDE clinic and to have full contact tracing.

Two hundred and fifty five patients were included in the study. Of these, 236 (93%) consented to screening for CT/NG. Three patients were excluded based on age. All other participants were between 25 and 40 years (median age = 33 years). Five samples were not processed. Three of these were incorrectly labelled, one was lost in the laboratory and one was not sent. Six patients (2.4%) tested positive for CT; there were no positive results for NG. The retrospective review indicated that out of 138 smears performed, in the three months prior to the study period, CT/NG testing was performed in 10 (7%) of cases.

The results from the pre-test questionnaire are illustrated in Figure 1. This demonstrated 36% (n=84) had been tested for CT or NG previously. When asked, 30 (13%) of respondents indicated they would have requested it themselves. Furthermore, 42 (18%) of respondents believed that STI testing was part of the routine smear test. The results of the post-test feedback questionnaire are illustrated in Figure 2. 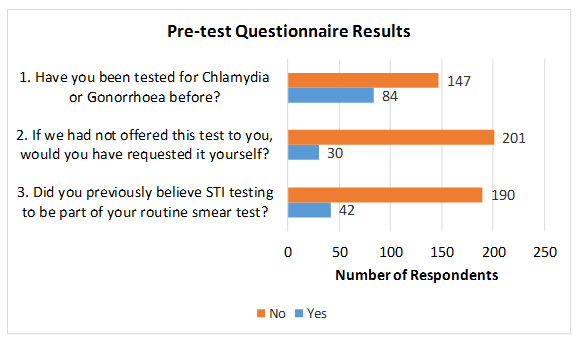 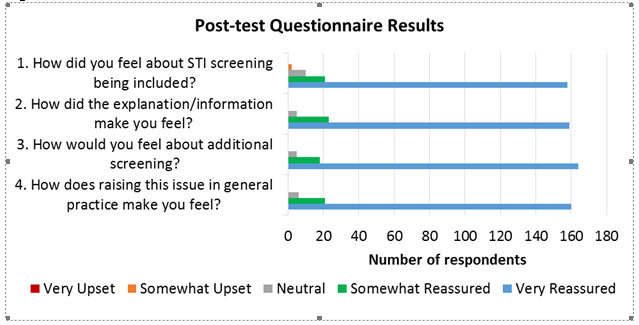 Our initial retrospective review of CT/NG screening at the time of smear testing demonstrates opportunistic screening is not routine practice and confirms a low rate (7%) of patient requested testing. The high participation rate (93%) and largely positive results of the feedback questionnaire clearly indicate CT/NG screening is both feasible and acceptable to patients and providers alike. From 2007-2009 The Royal College of Surgeons in Ireland carried out a cost efficacy study examining opportunistic screening for CT in Ireland, ultimately concluding that it was ineffective.6 While a high level of uptake and a good level of patient acceptability was noted, less than 10% of eligible candidates were actually offered screening. GPs cited lack of payment, time pressure (screening at that time involved more time consuming, less efficient urinalysis PCR testing) and difficulty of raising the issue of STIs as obstacles to screening. This study highlights an excellent opportunity to increase the uptake for screening at the time of smear test, when the previously described obstacles are not present, and results here supersede this previous study. While there is no national CT screening programme in Ireland, the UK National Chlamydia Screening Programme actively screens those aged under 25 years, the population generally considered to be at highest risk of infection. Figures from the UK show a prevalence rate for CT of 3.1% among sexually active 16-24 year olds.7 American data has shown increasing prevalence of STIs in patients aged 24-40 years from 2008 – 2012 suggesting a shift in the perceived at risk population groups.8 Thus the diagnostic rate of CT (2.4%) in this study of 25-40 year olds supports the notion that screening in an older age group may also be of benefit. In a comparable, albeit smaller study, Harris reported an even more significant CT detection rate of 8.4% in patients undergoing routine cervical smear testing.9

In 2011, Ogbechie and colleagues found 71.7% of younger women mistakenly believed cervical cancer screening also screened for CT.10 While numbers in our study were lower, almost one in five (18%) participants believed STI screening was carried out during smear taking. The need for greater patient education is clearly evident regarding this aspect of cervical screening, and separately, the need for STI testing, and what it involves. In our study approximately half of those who gave a reason for not participating believed they were not at risk, as in a long term relationship or not sexually active and the remaining respondents had been recently tested. A study by Bowden and colleagues in 2008 demonstrated routinely offering Chlamydia screening at the time of smear approximately doubles the rate of Chlamydia testing in general practice.11 The rise in STI testing rates from a baseline of 7% up to 93% during the study period shows an even more marked effect and affirms the high level of patient and provider acceptability. There were no positive results for NG infection despite the number of diagnoses having increased considerably in the past decade. This may in part be attributable to the fact that this increase has affected males more than females with a ratio of 4 to 1.1

Limitations of this study are as follows. We did not include women under 25, those over 40, and men (except as part of contact tracing). The lower age limit reflects the lower age limit of the CervicalCheck programme. The upper age limit reflects the concern that older women attending for cervical screening who consider themselves to be at low risk of STI may be upset at being offered screening. The study did not include a cost benefit analysis, and while feedback from service providers in practices was anecdotally strongly positive, cost benefit was not systematically measured. While it was beyond the scope of this feasibility study to carry out a full cost analysis of implementation of a national screening programme, the HPSC carried out a pilot study of opportunistic screening for genital Chlamydia trachomatis infection in Ireland between 2007 and 2009 which included a cost analysis.6 Based on their list of costs, in combination with the findings of our study, we estimate that Chlamidia screening alone per year would cost €5,256,489. No comparable cost analysis was available to estimate the cost of screening for NG. Offering STI screening is a sensitive subject that can be difficult for GPs and potentially offensive to patients. The acceptability and feasibility of testing during cervical screening to both patient and doctor in this study strongly suggests it is an appropriate setting. By normalising STI testing, patients are less likely to feel they are specifically being targeted, and stigma associated with STI screening is likely to be reduced.

This study demonstrates an efficient additional screening opportunity in a group of patients at risk of an often clinically silent but important condition, for which an effective treatment is readily available. The study builds on the trust, acceptability and confidentiality of the general practice setting, and practically reflects an important and well recognised growing public health risk among sexually active adults. It includes individuals who may not otherwise have considered screening, creating an opportunity to systematically provide important information to the population at risk. We believe the results from this study strongly support the need to conduct a regional or population based study on screening for Chlamidia trachomatis as part of cervical screening.

Patients and Practice Staff who participated; Colleagues in the 4th Year Research Group at The TCD HSE GP Training Scheme.