Two months later, after an interval weight gain of 1.2kg (Figure 1), his symptoms along with a severe metabolic alkalosis (pH 7.70) recurred and imaging again confirmed IHPS (pyloric channel length 20 mm, muscle thickness of 4.5 mm). Intraoperatively, the hypertrophic muscle was divided at a second point after observing that the initial split was intact.

Metabolic alkalosis-induced respiratory depression has been reported just twice previously in IHPS1,2. In the presence of significant metabolic derangement, these infants need to be closely monitored for apnoea and hypoventilation. 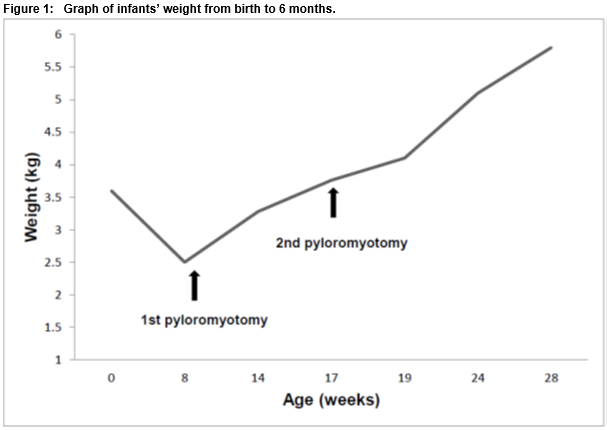 IHPS occurs almost exclusively in infants younger than three months. True recurrence is confirmed by intraoperative findings and requires an asymptomatic period with no vomiting, interval weight gain and normal feeding following initial pyloromyotomy. This is an extremely rare entity with just seven published cases in the literature3,4. It has been hypothesised that true recurrence is due to early operative intervention in a disease process which is still in evolution4. To date, all true recurrences have been in infants whose initial presentation was at a median (range) of 19 (10-27) days with representation after a period of three to four weeks. In this case, initial presentation was significantly later at nine weeks and the interval to representation a further eight weeks later indicating that the process of pyloric muscle hypertrophy can be more slowly progressive and prolonged beyond that previously reported in the literature. The slow progression of pyloric hypertrophy likely contributed to the severe metabolic alkalosis identified on both occasions.