Anecdotal evidence over the years has suggested that toast made in hospital, so called ‘hospital toast’ tastes better than toast made at home, or anywhere else for that matter. We carried out a prospective, multi-professional study to determine the views and the toast eating habits of NHS staff. Fifty members of NHS staff were surveyed across two hospital trusts. This included nursing staff, doctors from various specialties and allied health professionals. Results were overwhelming, a staggering 96% admitted to enjoying a slice of hospital toast while at work. In keeping with anecdotal evidence, 92% were adamant that hospital toast tasted better with multiple ingenious theories suggested for the reason behind this. So the rumours seem to be true, well, according to the ‘bread and butter’ of the NHS anyway; hospital toast tastes better than toast anywhere else. It provides fuel to busy healthcare professionals and overall boosts staff morale during trying times in the NHS. The mystery behind this magical hospital toast remains unsolved.

Anecdotal evidence over the years has suggested that toast made in hospital, so called ‘hospital toast’ tastes better than toast made at home, or anywhere else for that matter. Post-operative patients are welcomed back to consciousness with two freshly made slices of toast and a choice of accompaniments at the end of their operation. But, is it only the patients who swear by the delicious taste of hospital toast? We carried out a prospective study to ascertain the opinion of hospital staff on the matter of hospital toast with the aim of determining if hospital toast really does taste better and why. We specifically looked at patterns of toast consumption, the type of toast and accompaniments preferred as well as the opinions of staff on factors affecting toast consumption and its effect on staff morale.

This was a prospective study which was carried out across two hospital trusts in Northern Ireland; The Belfast Trust and South Eastern Trust. Multiple NHS professionals (N=50) throughout both hospitals were surveyed. This included a variety of doctors from different specialities, physiotherapists, nursing staff, auxiliary staff, porters and hospital managers. This study not only captured ward staff but also theatre and recovery staff. Surveys were carried out at random over a three week period. A written pro-forma was given out to be completed.

Overall, 96% of NHS staff surveyed admitted to eating and enjoying hospital toast while at work. The female staff dominated the survey making up 84% of the respondents. Ward based staff made up 34%, theatre staff 50%, recovery staff 6% and the remaining 10% worked across all areas.

So how often are staff enjoying a slice of hospital toast? (Table 1. and Fig. 1)

In keeping with anecdotal evidence and therefore rather unsurprisingly, 92% of staff surveyed were adamant hospital toast tastes better than toast at home, or anywhere else for that matter. So, who knows why it tastes better? Many theories have been documented during this survey but 14% of staff held their hands up and admitted it was a mystery that they simply could not explain. Half of all staff surveyed thought the use of real butter on the toast contributed to its delicious taste while another 16% felt the toasters supplied in hospital have an important role to play. Other theories listed included the benefit of an over worked toaster as well as the benefit of fuel and energy to over worked staff. One ingenious responder theorised that bread placed in a pre-heated toaster cooks quicker which stops it drying out: the outside becomes crispy while the inside stays moist. 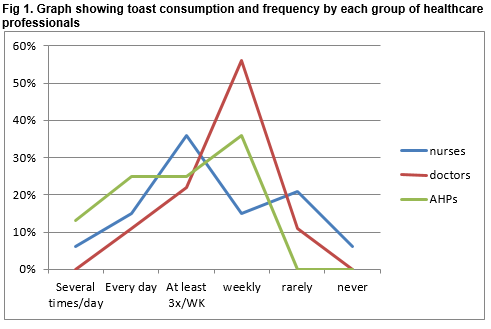 White bread was the chosen type by almost half of all staff surveyed (48%), 27% only ate brown bread, But interestingly, 25% admitted they were not fussy and were willing to eat any type of bread that was available in their hour of need.  What makes the perfect slice of toast? Well, 65% claim butter and butter alone is all they desire on their toast, a further 25% prefer a combination of both butter and jam. The remaining 10% listed a range of their preferred toast accompaniments, ranging from a healthy banana to a bag of crisps.

A staggering 90% of NHS staff surveyed stated staff morale would be adversely affected if the trust did not supply bread and a toaster. With one responder stating they would have to leave their job if the toasters were taken away.

It is clear to see from this observational, multi-professional study that the majority of NHS staff enjoy a slice of hospital toast during the working day or night. Indeed, many claim this serving of toast improves their performance at work, reduces fatigue levels and improves their mood, overall helping to battle against an enduring long day or night shift.  This remains true whether working on the ward or in theatres, regardless of the profession surveyed.

It is evident that the majority of staff surveyed are in agreement that hospital toast tastes better than any other toast, with 92% stating this in the survey. Not one theory behind this remains consistent, although several theories have been alluded to. With almost half of staff preferring white bread and 65% enjoying this with butter alone, could it be, that toasted white bread with lashings of butter is the guilty pleasure of the NHS? It certainly appears to be a possible theory which has been listed by several respondents.  Sixteen percent claimed it was the mechanism of the toaster that aided the creation of the perfect slice of toast. However, not all toasters throughout both trusts surveyed were the same, which would conclude this isn’t the big secret behind the making of the perfect slice of toast.

What factors affect toast consumption? Surveyed answers included; availability, lack of other food available, or the expense of other food for sale in hospital. Others felt it was a much needed boost to stave off hunger during a long shift. It is well known that sugar and carbohydrate consumption can boost energy levels, albeit temporarily in some cases. A study of energy drinks in athletes reported the benefits of carbohydrate in liquid form to include enhanced performance levels and better endurance by maintaining blood sugar levels and reducing the use of glycogen stores in the liver1. Could it be possible that a carbohydrate boost in the form of a few slices of buttered toast is all it takes to endure a long shift in hospital? It certainly would appear to play a role.

Another fascinating part of this survey was establishing the influence of toast on staff morale. An overwhelming 90% felt something as small as a slice of toast had a large impact on boosting staff morale throughout the hospital. Having readily accessible and easy to prepare food available on long hospital shifts is something written into the junior doctors contract. It stands to reason then that if food is not available to hungry and stressed doctors it would adversely affect morale. Surprisingly though, this survey has revealed, this view is not only held by doctors but also by nursing staff and other AHPs, many of whom have passionate view points on the matter. Some have stated that toast is essential and they would be unable to make it through a night shift or long day without a slice of hospital toast. Others have claimed it is probably the only perk of the job and something they look forward to during their shift.

So the rumours seem to be true, well, according to the ‘bread and butter’ of the NHS anyway; hospital toast tastes better than toast anywhere else. It provides fuel to busy healthcare professionals and overall boosts staff morale during trying times in the NHS. The mystery behind this magical hospital toast remains unsolved.

The authors declare that they have no competing interests.  This work has not previously been presented or published elsewhere and is not under review in another journal