The aim of this audit was to determine the effectiveness of large group tutorials for teaching neurology to medical students. Students were asked to complete a questionnaire rating their confidence on a ten point Likert scale in a number of domains in the undergraduate education guidelines from the Association of British Neurologists (ABN). We then arranged a series of interactive large group tutorials for the class and repeated the questionnaire one month after teaching. In the three core domains of neurological: history taking, examination and differential diagnosis, none of the students rated their confidence as nine or ten out of ten prior to teaching. This increased to 6% for history taking, 12 % in examination and 25% for differential diagnosis after eight weeks of tutorials. This audit demonstrates that in our centre, large group tutorials were an effective means of teaching, as measured by the ABN guidelines in undergraduate neurology.

Neurology is often perceived to be a ‘difficult’ medical specialty by undergraduate students, the result is that many students experience what has been termed ‘neurophobia’, and it is estimated that as many as one in two will experience this phenomenon¹. This perception has remained unchanged over several years, and a national survey in the United Kingdom of 2,877 students demonstrated how widespread ‘neurophobia’ is; neurology was found to be significantly more difficult compared to other medical specialties and students were least comfortable in formulating a differential diagnosis in neurology compared to other medical specialties². However, this perception of neurology as ‘difficult’ is not restricted to undergraduate students, as general practitioners have also reported similar attitudes to this specialty3.

Whilst the aetiology of ‘neurophobia’ amongst doctors in training is likely to be multifactorial, different strategies have been employed to try to tackle this problem, including: team based learning4, targeted neurological examination techniques5, and altering the length and focus of neurology courses6. Irrespective of the approach taken, it would seem reasonable that better teaching and education are at the heart of tackling this problem; a previous Irish study in this regard, suggested that trainees perceived an increase in the number of tutorials as the best means to improving their knowledge in neurology7. However, to date this strategy has not been tested in an Irish context.

Having previously identified an increase in the number of tutorials as a possible strategy to combat ‘neurophobia’; we therefore sought to arrange this in our centre for undergraduate medical students. However, with increasing class sizes, and a finite number of patients on the neurology ward, it is often necessary to supplement bedside tutorials with larger group tutorials. In this case large group tutorials were defined as tutorials in which all available students were invited to attend each tutorial, with approximately one hundred students in each. As the effectiveness of large group neurology tutorials was unknown in our centre, we audited this teaching practice; to determine if this approach may be of benefit for future medical students.

Prior to starting the large group tutorials in neurology a sample of the class were asked to complete a questionnaire ranking their confidence on a ten point Likert scale on each of the guidelines for undergraduate knowledge published by the Association of British Neurologists (ABN)8.The guidelines include the following eleven categories, in which students rated their level of confidence before and after the tutorials. The questions asked are shown in Table 1. Teaching consisted of eight 45 minute tutorials based on the following topics in neurology: multiple sclerosis, epilepsy, headache, stroke, Parkinson’s disease, neuropathy and myopathy.

Tutorials took place once a week in a lecture hall, and where possible, the tutor arranged to bring a patient to the class in order to take a history and display the pertinent neurological signs on examination. Following this a brief didactic lecture was given, during which students were actively encouraged to ask questions. One month after completion of the tutorials a second representative sample of the class were chosen to complete the same questionnaire provided at baseline, in addition students were asked to rate how useful the tutorials were for them.

The first sample of the class for the audit consisted of 45 students (24 female), two thirds of whom were aged 20-24. Following the teaching the second cohort contained 16 students (6 female), 88% were age 20-24. Prior to the teaching, none of the students rated their confidence as nine or ten out of ten in recognising a disorder of the nervous system. This improved following the teaching, where 12% of students rated their confidence in this domain as either nine or ten. 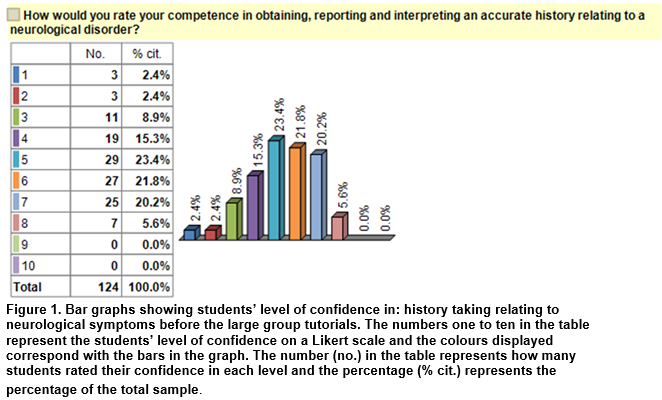 In this audit a higher percentage of students rated their level of confidence in each of the domainsin the ABN guidelines, as nine or ten out of ten, after the large group tutorials, than before. These results suggest that this format of teaching may be an effective way of addressing a previously highlighted need in our centre7 for an increase in the number of neurology tutorials for doctors in training. Furthermore, the increase in students’ level of confidence in the three core domains of clinical neurology: history taking, examination and differential diagnosis, would suggest that these large group tutorials may also an effective means of decreasing the prevalence of ‘neurophobia’ amongst undergraduate medical students in our centre.

Whilst the results of this audit were encouraging, the results are not generalizable. In order to do this research (rather than audit), it would be required to establish whether the approach adopted in our centre is indeed optimal for increasing tutorials, or if the addition of other modalities such as online learning9 may improve students’ level of confidence in neurology, thereby reducing the prevalence of ‘neurophobia’. Research in an educational context could potentially comprise randomisation of students to different groups in order to evaluate the most effective method of teaching10; rather than audit where an established practice is compared to a published standard or guideline (in this case the ABN guidelines). Research could consider the return of neurophobia in students as a potential outcome measure in any such educational intervention and establish the timing at which this returns, perhaps at a later date (such as six months).

Improved neurological knowledge is of importance, as it is estimated that up to one quarter of acute medical admissions require follow up in a neurology clinic and similar numbers of presentations to the emergency department are due to acute neurological problems11. Whilst it is likely that the minority of medical students will pursue a career exclusively in neurology, many will work in the emergency department as part of general medical training or in general practise, where they are very likely to be exposed to a wide range of acute neurological problems, thereby underlying the importance of a basic level of competency in this specialty, and by extension the development of an effective teaching methodologies in neurology.

Other modalities of teaching that may be considered in future could include revision courses in neuroanatomy, a sine qua non for localisation in clinical neurology. In addition to anatomy more formal didactic lectures or lecture series addressing commonly seen neurological conditions may be of use, with the caveat that each of these would require audit to determine their individual benefit to students.

The premise for this audit was to determine the effectiveness of the teaching being provided and our data overall, shows a positive trend in this respect, using the ABN guidelines for reference. However, this is based on the hypothesis that improved teaching will definitely reduce ‘neurophobia’6, 7, whilst this seems intuitively true, again this audit is not designed to test or explore this theory and research (not audit) in undergraduate education would be required in this regard to establish proof. Furthermore, the optimal method for maintaining knowledge beyond one month (as tested in this audit) would be of importance to establish as it is conceivable that the knowledge imparted in the tutorials may be transient for the undergraduate stage of students’ education. As neurophobia has been recorded in general practitioners3; it would also be of importance to determine the optimal method of teaching such that a basic knowledge of neurology is maintained throughout each doctor’s medical career to minimise this phenomenon.

In conclusion, the results of our audit demonstrate that large group tutorials in neurology increased students’ level of confidence in a number of domains in the ABN guidelines for undergraduate students in neurology.

The author conforms there is no conflict of interest related to this article.