Aims
Annual seasonal influenza (flu) vaccination is recommended for all healthcare workers (HCW) in the Health Service Executive (HSE) in Ireland. This is to reduce the risk of HCW contracting the flu and onward transmission to their patients. HCW uptake remains less than ideal, despite extensive seasonal influenza campaigns and vaccination promotions. The aim of this study was to investigate the attitudes and uptake to flu vaccination among HCW, and to determine how much these influence their decision to be vaccinated.
Methods
A survey was sent to HCWs working in three healthcare facilities within HSE North-East following an outbreak of seasonal influenza in a local long-term care facility (LTCF), asking if HCW had been vaccinated for the 2016 to 2017 influenza season; the survey additionally included questions about attitudes and beliefs with respect to vaccination.
Results
Seventy HSE-employed HCWs in the North-East counties of Ireland responded to survey (93.3% responded to survey; 61.4% were based in long-term care facilties; 80.0% were female; and 35.7% were vaccinated for 2016 to 2017 influenza season). Most respondents reported that HCW flu vaccination was good example for patients (87.1%), while 92.9% acknowledged that it was important in healthcare facilities. The majority of HCW supported annual HCW flu vaccination (68.6%), with 52.9% of respondents reporting that they would be vaccinated for the 2017 to 2018 influenza season. However, only 35.7% agreed with mandatory HCW vaccination. Furthermore, 28.6% of respondents were concerned that flu vaccination was associated with side effects, and 22.9% were not aware that flu vaccination protected their patients. Previous flu vaccination was shown to be the only statistically significant predictor for HCW vaccination (p < 0.001).
Discussion
These results suggest there is need to address some attitudes and beliefs around HCW vaccination for seasonal influenza, in addition to removing some practical barriers to having vaccination, may help contribute to an improvement in vaccination uptake. It might be useful to focus on specific topics, to create a vaccine promotion culture, like adverse effects of vaccination, and collective benefits for patients in HSE to help improve HCW staff vaccination uptake.

Introduction
Vaccination against seasonal influenza is recommended for all Irish Health Executive Service (HSE) healthcare workers (HCW) to help decrease the risk of contracting the virus and subsequently transmitting it onto patients in their care1,2. It is reported that more than one in five HCW may become infected with seasonal influenza during any mild flu season, and of these, up to 60% will develop subclinical disease3. HCWs have been identified as a major conduit for transmission of infections to patients. Reports in the literature have shown that HCW vaccination against seasonal influenza reduces infection and complication rates4-6. Despite knowledge of all this, vaccination uptake in Ireland for the 2016 to 2017 influenza season remained less than the 40% HSE target (i.e. 31.9% and 28.1% for HCW in hospital and long-term care facilities respectively)1.

The anonymised data were compiled from the survey responses and were entered into an Excel spread sheet (Microsoft Corp, Redmond, WA). This data were then collated and validated. The final data set was then imported into a statistical package (IBM SPSS Statistics for Mac, Version 22.0 (IBM Corp, Armonk, NY)). The cohort was analysed by applying descriptive statistics. All variables were considered independent. Results from both groups (i.e. groups based on vaccination for the season) were compared to identify any differences. Chi-square test was used for categorical data.

All 22 survey questions are shown in Table 2. For the access to vaccination questions, it revealed: most HCW found access easy (91.4%; 64/70); and there was good support from line managers (74.3%; 52/70). For the attitudes to vaccination questions, it highlighted that: high proportion thought it was important healthcare facilities (92.9%; 65/70); majority disagreed with mandatory HCW influenza vaccination (61.3%; 43/70); and considerable minorities were not confident in advising patients (27.1%; 19/70) and thought influenza vaccination was associated with side effects (28.6%; 20/70). 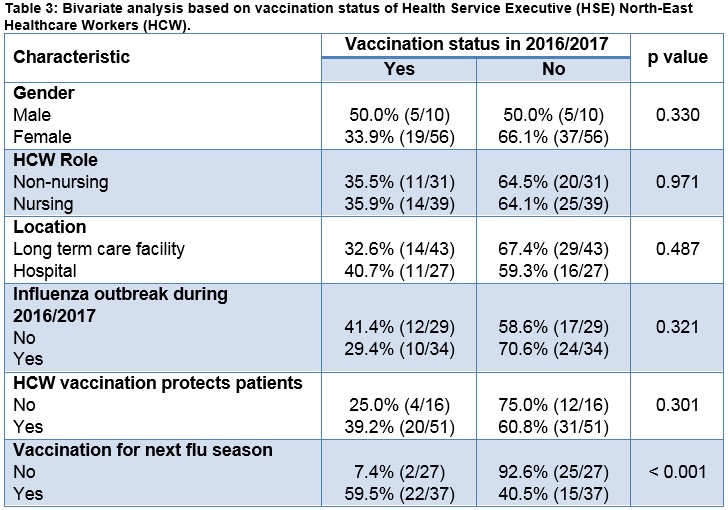 Discussion
This survey has highlighted differences in HSE-employed HCW attitudes towards influenza vaccination, which can be linked to reasons for HCW vaccination uptake rates being below the HSE benchmark of 40%. Influenza seasons are known to be highly variable in terms of their severity and extent annually8. Therefore increasing HCW vaccination uptake and reducing risk of transmission to patients receiving institutional healthcare are good estimates that might reflect the most favourable outcomes of any influenza vaccine campaign1,9.

The responses to the access to vaccination questions highlight that: the majority of HCW were aware of availability of workplace vaccination (91.4%), with a minority reporting difficulty of getting a convenient appointment (12.9%). Additionally, there was good managerial support for accessing this service (74.3%). These responses show great awareness and support for HCW undergoing influenza vaccination, and also offer reassurance that HSE campaign is reaching all the relevant staff. Furthermore they have been highlighted in the literature as drivers for improving vaccination uptake10 11.

The responses to the attitudes to vaccination questions reveal that: the most of respondents to the survey thought that HCW influenza vaccination was a good example for patients (87.1%); a large proportion acknowledged it was an important workplace measure (92.9%); and the majority felt it was important not to off sick from work with flu (77.1%). These findings were comparable to reports in the literature5,10,12. However, it also noted that considerable small proportions were still likely: to attend work if unwell (45.7%); did not feel confident on advising patients about vaccination (27.1%); and thought that vaccination was associated with serious side effects (28.6%). These findings highlight some misconceptions about HCW vaccination, are similar to other published works5. Finally, it also showed conflicting responses with the majority agreeing with annual HCW vaccination (68.6%), and a small proportion that HCW vaccination should be mandatory (35.7%). There is no consensus on this question in the literature, with most developed countries having great variability in clinical practice2,5,10,13.

The responses to the aversions to vaccination questions revealed that most HCW have no fear of needles (92.9%) and the majority had no known allergies to vaccination (94.3%). These findings reflected those in literature13,14. The responses to the advantages to vaccination questions showed that sizeable minorities of respondents were not aware that HCW vaccinated protected their families and patients from influenza (27.1% and 22.9% respectively). These findings may reflect a mismatch between information provided and understanding of clinical relevance of HCWs vaccination.

The combined responses to this survey highlight the potential challenges to seasonal influenza vaccination and suggest that action should focus on multiple areas. These may include: increasing ease of access/convenience of vaccination for HCW (i.e. increased appointments or further roll-out of peer-vaccination initiatives), while addressing attitudes and beliefs surrounding the adverse effects and effectiveness of the seasonal influenza vaccine. These might all additionally help in improving uptake amongst all HSE-employed HCW.

It was also noted that vaccination status for HCW was the only significant predictor for future vaccination among this cohort. Thus possibly suggesting among all HCW roles, that once the importance and reassurance that vaccination was safe and effective was communicated and experienced; there was a greater likelihood for further use. There is no clear explanation for this finding. Reports in the literature additionally highlight other significant predictors for improving vaccination uptake may include: ensuring vaccine safety and effectiveness; desire to protect family members; and supervisor and Public Health endorsement10,11.

This survey is associated with some limitations. The first limitation is related to the small sample size, which did not allow for considerable subgroup analysis. But these preliminary findings are good measure of regional attitudes and beliefs related to vaccination, and are not significantly different to reports in the literature7. The second limitation is connected to the validity of the questionnaire used. These were based on items that had been identified in a larger United Kingdom based survey on HCW attitudes to seasonal vaccination; and in the absence of an Irish equivalent, it was more suitable to adapt a validated and previously used tool for use in the Irish setting.

Recent reports from the HSE for the influenza season (2016/2017) have shown that vaccination rates for HCW remain below the national target of 40%1. It does however also highlight some improvements from the previous season. The present undertaking has revealed that with improved attention to access and debunking myths about influenza vaccination, might help to focus efforts on improving these uptake levels regionally and nationally especially during the on-going 2017 to 2018 influenza season.