Awareness and Preventative Behaviours Regarding Toxoplasma, Listeria and Cytomegalovirus Among Pregnant Women

Aim
Infection with toxoplasma, listeria and cytomegalovirus (CMV) infections can negatively affect pregnancy outcomes. Awareness of these infections, knowledge of preventive practices and pertinent behaviours was assessed.
Methods
A survey of patients at antenatal clinics in a Dublin maternity hospital was conducted over a six month period. Analysis was undertaken using SPSS.
Results
The response rate was 36% (287/800). One in two respondents were aware of toxoplasma, one in four of Listeria but only 1 in 10 of CMV.  Overall, knowledge was highest among older, more educated pregnant women. Nativity had a significant effect on knowledge and behaviour, but increasing parity did not. However the majority practised key safe behaviours.
Conclusion
Information must be conveyed to pregnant women in a user friendly format and in a culturally sensitive way.

Introduction
Serious fetal infections can be transmitted transplacentally or perinatally1. Vaccination is a key prevention method as shown by the dramatic reduction of congenital rubella2. Reducing the risk of toxoplasmosis, listeriosis and CMV in pregnancy requires knowledge of their epidemiology and appropriate prevention strategies in the absence of vaccines3.

Ingestion of contaminated foods is the primary route of transmission of Listeria monocytogenes7. High-risk foods include unpasteurised milk, unpasteurised or soft cheeses, ready-to-eat meat products (e.g. pate, deli meats) and seafood (e.g. smoked salmon)8. The fetus, newborn infant, and pregnant women are at high risk of invasive listeriosis due to altered cell-mediated immunity. Invasive listeriosis has been reported to be 18 times more common in pregnant versus non- pregnant women, an incidence of 12/100,000 pregnancies9. Congenital listeriosis can lead to miscarriage, pre-term labour, stillbirth or serious neonatal morbidity with a risk of mortality10.

CMV is now the leading viral cause of congenital defects worldwide2. CMV is commonly acquired through close contact with young children who typically secrete the virus in saliva and urine for many months after their first infection11. Ten to 15 percent of congenitally affected infants and children have symptoms at birth including intrauterine growth restriction, hepatosplenomegaly, intracranial calcification and chorioretinitis, while another 15-20 percent develops symptoms such as sensorineural hearing loss and psychomotor impairment during their first year of life12.

To minimise risk of maternal infection during pregnancy and thereby prevent congenital and neonatal infection, it is vital that women of reproductive age are informed on how to prevent these infections, ideally before pregnancy but especially when pregnant3. This study’s aim was to assess whether pregnant women had heard of these infections, their knowledge of relevant preventive practices, and whether they had practised these preventive behaviours during pregnancy. This data will inform the development of educational and health promotional materials.

Methods
The study was undertaken at the Rotunda Maternity Hospital in Dublin which has 8,500 live births yearly. Ethical approval was obtained from the hospital’s Research Ethics Committee.

The study instrument developed following a literature review13,14,15 was an anonymous questionnaire. An information leaflet designed to support self-completion was provided in English, Chinese, Polish, Romanian and Russian in view of the hospital’s diverse antenatal population. The self-administered questionnaires were distributed to all consecutive patients attending their first antenatal visit (approximately 12-14 weeks gestation) at the public and semi-private clinics between June and November 2009.  Counselling was provided for women who were concerned about these infections following completion of the questionnaire.

The data was entered manually into an Excel spreadsheet and analysed using SPSS software16. Chi-square tests were undertaken on the categorical responses of Yes/No using six independent variables: age, education, having a medical card (allowing free entitlement to all healthcare services), nativity (Irish-born versus born outside Ireland), first language (English versus other), and parity. Fisher’s exact test was used in 2x2 tables where the expected count of at least one cell was less than five.

Results
The response rate was 36% (287/800). Maternal demographic characteristics are shown in Table 1. Response rates vary as parts of the questionnaire were omitted by some women. 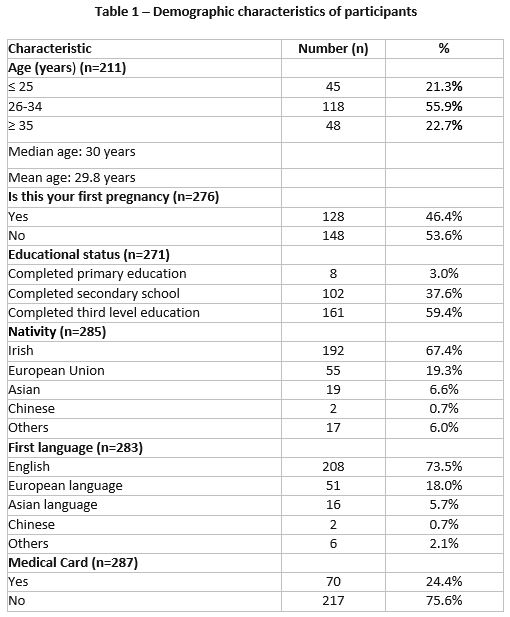 Discussion
This is the first Irish study to our knowledge among antenatal patients which assessed knowledge and behaviour regarding toxoplasma, listeria and CMV collectively. We found a significant lack of knowledge about all three infections but especially CMV. This survey gives an informative snapshot of awareness of these infections among a particular cohort of attendees and provides a baseline for the planning of future health promotion campaigns.

Toxoplasma awareness (49.6%) was similar to a US survey (48%)13 but substantially less than a Dutch study (75.3%)11. A quarter (26.2%) knew that they should “cook meat well”.  Ingestion of raw (mainly dried/smoked “sausage” meat) or undercooked meat during pregnancy was the predominant source of toxoplasma exposure among mothers of congenitally infected infants in Ireland4. A US study found that up to 50% of T. gondii infections were transmitted by ingesting undercooked meat making toxoplasmosis one of the most clinically significant food-borne diseases in pregnancy17.

Familiarity with listeria (28.8%) was somewhat better than in US studies14 (15-18%) but poor compared to a Dutch study (61%)11.  A 2008 study of listeria awareness among recently delivered mothers in Ireland found that 43.9% had heard about listeria with 30.3% knowing it was a food-borne pathogen10. Knowledge of listeria preventive practices was better among older and better educated pregnant women in our study.

Our study’s CMV awareness rate of 11% was low compared to 39% among pregnant women in Switzerland18. Knowledge of CMV preventive practices was poor. We found that “hand washing after changing a child’s nappy” to prevent CMV was the statement most often answered correctly (19.5%), similar to a Dutch study11.

In Ireland, early educational awareness programmes should be targeted at school curricula and coordinated with public health initiatives, media and advertising campaigns to reduce toxoplasma related illness as it is preventable4.This is vital as the overall seroprevalence of toxoplasma antibodies in women of childbearing age is 25% in Ireland19. Since 2008, there has been at least one congenital toxoplasmosis notification yearly except in 2009, 2014 and 2016. (Personal communication, HPSC).

Antenatal education and general public health information on listeria needs to be improved in Ireland10. A review of pregnancy-related listeriosis in France found that 80% of these women reported having eaten high-risk foods during pregnancy compared to 6.3% consuming rare (undercooked) meat and approximately 50% consuming raw vegetables and deli/ready-to-eat foods since becoming pregnant in our study20. On average there were 2.5 pregnancy related listeriosis cases yearly between 2004 and 201221 and also between 2014 and 2016. (Personal communication, HPSC). No cases occurred in 2013.

A significant burden of undiagnosed congenital CMV has been found in Ireland highlighting the importance of providing information on CMV to young women and pregnant patients’ specifically22. An estimated 30.4% of Irish women are CMV positive23. A study of congenital CMV reference material in both pregnancy reference books and websites found that CMV was less likely to be included but that the limited information was nearly always accurate24. Health professionals were the most common CMV information source in our study as observed previously15.

The sample’s representativeness is somewhat reduced due to a 36% overall response rate and a sub-optimal response to some questions. Although the setting did not include private patients making comparisons with other studies more difficult, semi-private patients were included. This study, carried out in 2009, nonetheless provides important information to inform current antenatal health promotion practice.

Healthcare providers must continue to advise pregnant women about protective behaviour and lifestyle habits. Informing them of specific infectious diseases may be less important, as pregnant women practise certain behaviours even if not familiar with these infections, or why they are doing it 11. It is essential to reiterate such advice at regular intervals in pregnancy.  Direct, accessible, language-appropriate education on these infections in various formats is necessary even for women previously pregnant4. We found no significant association with increasing parity which is worrying given the many opportunities for education by healthcare providers. In fact, primiparity was associated with toxoplasma awareness.

Cultural and ethnic practices also influence behaviour in pregnancy. The older, more educated (and for some behaviours higher social class women) were more knowledgeable about the infections and were more careful in general (with the exception of ingestion of raw vegetables). Social media, pregnancy apps and the recently launched HSE website MyChild.ie 25 must be used to share crucial food safety/hygiene advice in a user friendly format. Health practitioners also need to convey this advice in a culturally sensitive manner.

Acknowledgements
To all the women who participated and Dr Reem Akkaki and the staff in the antenatal clinic for their role in the study. To Patricia Garvey, Sarah Jackson and Paul McKeown Health Protection Surveillance Centre (HPSC) for provision of disease notification data. To Ms. Deirdre Carey, and Dr Bob McDonnell, Health Service Executive for advice and support. To the Food Safety Authority of Ireland and the Rotunda Hospital for their support.

Conflicts of Interest Statement
The authors declare no conflict of interest.