Bereavement Counselling for Healthcare Workers in the Aftermath of Child Death

Aim
To assess the views and experiences of bereavement counselling services among healthcare staff dealing with paediatric ward death at UHL.
Methods
This study comprised of a questionnaire that was distributed to all healthcare workers based on the paediatric wards. Data was collected over a two week period and pertained to seven child deaths that had occurred over a six month period in 2016. SPSS v23 was used for data analysis.
Results
Of the 56 respondents, 21.8% reported not feeling supported and 37% agreed that it impacts their ability to cope. In total,19.6% had attended bereavement counselling sessions and 40.5% were unaware of the service. Males reported to preferentially be facilitated by a hospital staff member and females an external facilitator.
Conclusion
This study is unique, as it looks at all the healthcare workers who could have been involved in paediatric ward death.The need for an individualised bereavement counselling service is not only highlighted by the preference of group and one-to-one sessions but also by differences in gender preferences.This study highlights the need to improve staff awareness of the counselling services that are available and the need to proactively approach staff to offer these supports after paediatric patient deaths and other serious adverse events.

Introduction
It is well recognised that healthcare workers can experience physical and emotional exhaustion as a result of cumulative grief and associated compassion fatigue. This not only has significant consequences for the individual but also for the hospital as a whole. However to date the literature mostly focuses on how paediatric death effects family members and not specificially healthcare workers.

Cumulative loss can contribute to compassion fatigue, which describes the physical, emotional, and spiritual exhaustion that results from caring for patients and witnessing associated pain and suffering.1 This exhaustion has been linked with the loss of ability to provide compassionate care, a decrease in quality of patient care, and decisions to leave the workplace.2-4 On an individual level, compassion fatigue can cause physical complaints such as fatigue, sleep and gastrointestinal distrubances, headaches and weight gain1,5 The psychological complaints encompass a lack of enthusiasm, depression, desensitization, irritability and the  feeling of being overwhelmed.6

For an organisation, cumulative grief and compassion fatigue has been associated with an increase in absenteeism, performance issues, interpersonal issues, staff turnover and a decrease in the quality of patient care.1,5,6,7 However despite these serious consequenes, organisations often fail to support healthcare workers experiencing cumulative grief or compassion fatigue.7,8 Furthermore, employers have a duty of care under common and statute law to ensure care for the health and safety of their workers. There are moral and legal duties to consider the psychological needs of personnel following exposure to traumatic events related to the workplace.

Currently, there is a paucity of research regarding the effectiveness of bereavement counselling for Paediatric staff after critical incidents. Resources that should be available include bereavement counselling, education and time to grieve. The University Hospital Limerick (UHL) offers free counseling sessions for employees who desire them, and the pastoral care department also offers supportive care on request. However, the number of healthcare staff who are aware and use these services is currently unknown.

Methods
This study comprised a qualitative and quantitative purpose-built questionnaire that was distributed to all healthcare workers based on the paediatric wards. Participants were approached individually by the authors, while working on the ward. Data was collected over a two week period that pertained to seven child deaths that had occurred over a six month period in 2016. This included expected and unexpected deaths and did not include neonates. SPSS v23 was used for data analysis. 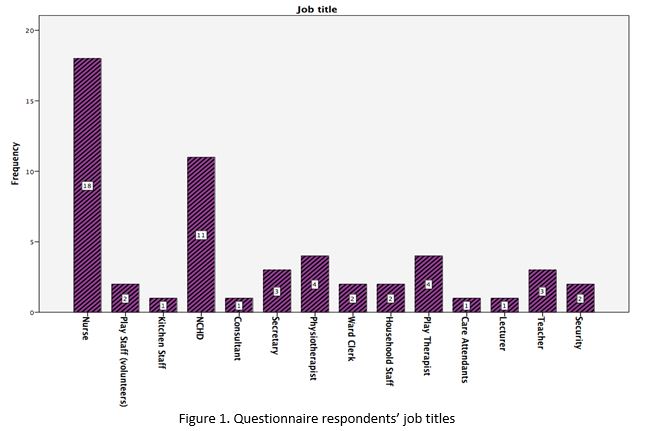 We found that 61% (n=34) of respondents were aware that pastoral care was available to staff, as well as to families, and that 68% (n=36) prefer to have group counselling sessions rather than one-to-one sessions. Our survey showed that 11% (n=6) wanted bereavement counselling within two days, 45% (n=24) wanted it within one week and 43% (n=23) within one month. Only 20% of respondents (n=11) actually attended berevement counselling at UHL, and of these, 8 were satisfied with their sessions.

Of those who didn’t attend UHL bereavement counselling sessions for various reasons, 43% (n=16) had no experience of child death, 41% (n=15) were unware of the bereavement counselling services, 5% (n=2) were away at time the sessions took place, 5% (n=2) said the sessions were after hours and 5% (n=2) of respondents couldn’t commit or didn’t feel the need to. Our analysis showed that 59% (n=29) of respondents said they would prefer an external facilitator to a hospital staff member. When we analysed this question by gender, using fisher exact statisitcal analysis, we found that males reported a preference for facilitation by a hospital staff member while females preferred an external facilitator (p=0.05).

Discussion
This study is unique, as it looks at all the healthcare workers who could have been involved in paediatric ward death, and not just nurses and doctors. We had fourteen different types of hospital workers respond to this survey, with the largest cohorts in in descending order being nurses, NCHDs, then jointly physiotherapists and play therapists. We calculated that there were potentially, approximately 200 healthcare workers involved in the care of the children in question over the 6 month period. We were unable to collect data from the healthcare staff that had moved at the changeover period. It is worrying that 51% (n=28) of respondents don’t feel supported at work in the aftermath of child death. The importance placed on bereavement counselling support sessions was very high with 82% (n=46) seeing the need for these sessions. This may represent some of the 37% (n=20) of respondents that find their ability to cope at work more difficult after child death, and other co-workers seeing this in their colleagues during these times.

Group sessions were preferred to one-to-one sessions by 68% (n=38) of respondents. However some individuals highlighted in the comments section that they felt the group sessions were ‘uncomfortable’, that ‘others held back’ and that ‘others didn’t want to be there’. The need for an individualised bereavement counselling service is not only highlighted by the preference of group and one-to-one sessions but also by differences in gender preferences. We found that that males reported a preference for facilitation by a hospital staff member while females preferred an external facilitator (p=0.05). An ideal bereavement counselling service would thus include hospital and external facilitators with group or individual sessions.

This study highlights the need to improve staff awareness of the counselling services that are available and the need to proactively approach staff to offer these supports after paediatric patient deaths and other serious adverse events. Ideally the scope of bereavement counselling could be extended to allowing time for self-healing activites for individuals while at work. The literature shows that meditation, journaling, prayer, and quiet time may be therapeutic for healthcare workers.9,10 Other methods to encourage self-healing that could be used include yoga, tai chi, relaxation exercises, and music.6,11 The HSE undertook a review of methodologies which can assist in the provision of a ‘graduated and proportionate response’ to the review of incidents as identified in the HSE’s Incident Management Framework (2018). After Action Review (AAR) was identified as one such methodology. AAR is a structured facilitated discussion that is undertaken before or soon after an event occurs and seeks to understand the expectations and perspectives of all those staff involved.12

Conflicts of Interest Statement
None to declare.