Cancer Incidence and Mortality due to Excess Body Weight in Ireland: An Analysis of 10-year data.

Excess body weight (EBW) increases the risk of specific cancers. The prevalence of EBW has risen significantly in Ireland over recent decades. To highlight the impact on cancer, and to inform future policies, we calculated the proportion of cancers in Ireland that were attributable to EBW using the Population Attributable Fraction (PAF). This fraction was then applied to Irish incidence and mortality data for specific cancers from 2003-2012 to estimate the number of new cancers and cancer deaths attributable to EBW. We found that each year in Ireland, approximately 800 new cancers and 300 cancer deaths are attributable to EBW. The greatest attributable risk of cancer was seen for the upper digestive tract and endometrium, whilst breast and colorectal have the greatest numbers of attributable cancers. EBW is a major cause of cancer, responsible for 4.5% of all cancers in Ireland. Public awareness of this significant preventable risk must improve.

Introduction
The prevalence of individuals classified as having EBW, a Body Mass Index (BMI) ≥ 25 Kg/m2,, has increased rapidly across the globe. The World Health Organization (WHO) states that ‘Worldwide, obesity has more than doubled since 1980, and nearly tripled in many countries of the WHO European region’1. An estimated 43% of cancers are related to exposure to 14 lifestyle and environmental factors, including smoking, alcohol and physical inactivity2. People are less aware of the role of EBW in cancer development3. There is a known association between EBW and increased risk of specific cancers including oesophageal, gastric cardia, gallbladder, bile duct, liver, colon/rectum, kidney, ovarian, endometrial and breast (post-menopausal) cancers3. The strength of the relationship varies by site. The objective of this study was to calculate cancer incidence and mortality in Ireland causally related to EBW over the ten year period 2003-2012.

Methods
The PAF is used to estimate the proportion of that condition which is causally related to the exposure of interest4. In this study the conditions of interest are specific cancers, identified through a systematic literature review, and the exposure of interest is EBW. The PAF is a function of the population age-specific prevalence (P) of EBW and relative risk (RR) estimates of acquiring a specific EBW-related cancer. It is calculated using the formula:

PAFs can be applied to population data on incidence and mortality to determine the number of new cancer cases and cancer deaths, for a specified period of time, that are causally related to the exposure of interest (EBW). This research was performed using prevalence data on EBW from the Survey of Lifestyles Attitudes and Nutrition (SLAN) 2002. This self-reported data on height and weight was used to calculate the body mass index (BMI) for individuals. The BMI from these data was categorised into World Health Organisation (WHO) BMI groups for underweight (BMI less than 18.5kg/M2); healthy weight (BMI between 18.5 and 24.99 kg/M2); overweight (BMI between 25 and 29.99 kg/M2) and obese (BMI greater than 30 kg/M2).

EBW (overweight and obese) groups were then adjusted upward for underestimation of body weight with self-reported data. The correction fraction applied was calculated from the SLAN 2007 study which had measured height and weight for a subset of the population5. A literature review of meta-analyses and systematic reviews was undertaken to identify the RR for specific cancers that are causally related to EBW. The cancers identified through this literature review and used in the PAF calculations are presented in Table 1. The RR selected reflected the best data available for each cancer, which was usually the most recent meta-analysis performed.

These RRs were applied to SLAN 2002 corrected prevalence data for EBW to calculate the PAF. Confidence limits associated with these RRs were considered but, as with other PAF studies, we have not developed methodologies to calculate these for each EBW associated PAF. However, 95% Confidence Intervals associated with the RR were used to calculate upper and lower estimates for the number of cancer cases/deaths attributable to EBW. The PAF was derived for each cancer, by 5-year age group and per overweight and obese category for both males and females. National cancer incidence and mortality data for the specific cancers identified through our systematic literature review were obtained for the 10 year period 2003-2012 inclusive. Cancer incidence data were obtained from the National Cancer Registry of Ireland. Cancer mortality data were obtained from the Central Statistics Office. The PAFs calculated were collated with this cancer incidence and mortality data to determine the number of EBW attributable cancers. The total number of new cases and deaths between 2003 and 2012 attributable to EBW for these cancers was then calculated. 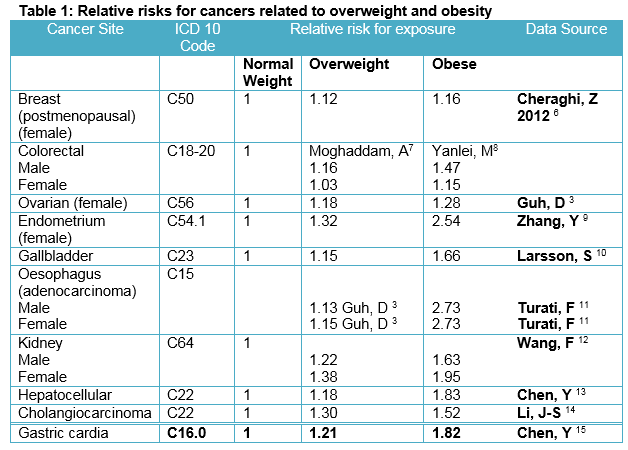 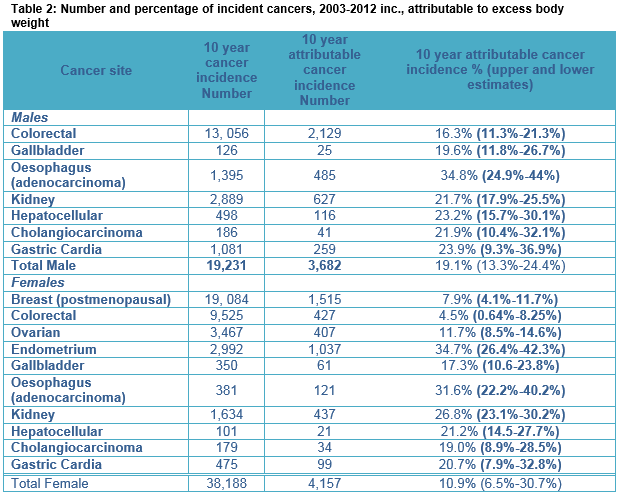 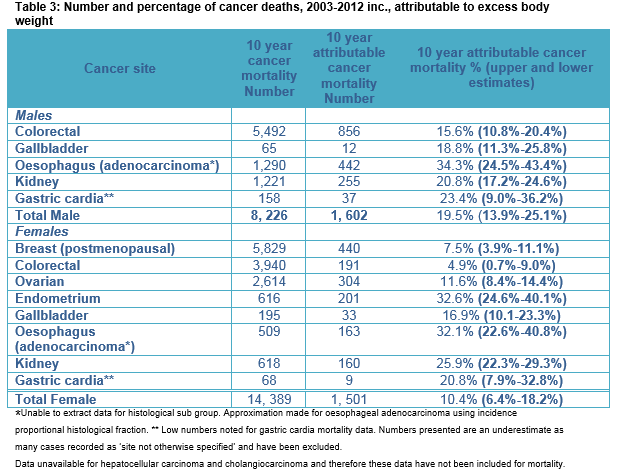 Discussion
EBW is one of the most important causes of cancer. However it is likely the public are more aware of the risks associated between EBW and diabetes or heart disease, than the risk of cancer. This study shows that 4.5% of newly diagnosed invasive cancers are attributed to EBW, i.e. a yearly average of 784 new cases and 310 deaths. This equates to 2.15 incident cancers and 0.85 cancer deaths, per day. The figure of 4.5% of all newly diagnosed cancers in Ireland (3.9% male and 5% female) being attributable to EBW is consistent with data calculated in the UK (5.5% overall: 4.1% male, 6.9% female),16 Europe (2.5% male; 4.1% female)17 and globally (3.6% overall: 1.9% male, 5.4% female)18. However, these data are likely to be a conservative estimate, particularly with regard to colon cancer, oesophageal and endometrial cancer, because of the variation in relative risks identified in the literature. Recent IARC data present much higher RR for oesophageal and endometrial cancers for obese patients with a BMI >4019.

The risk for cancer from EBW varies for different sites of the body. The greatest numbers of cancers attributable are seen for colorectal cancer in men and post-menopausal breast cancer in women, as these are common cancers. However, oesophageal adenocarcinoma, gastric cardia, endometrial and renal cancers have the largest percentage of causally related cancers. While only 7.9% of breast cancer cases were causally attributed to EBW, this equates to 153 post-menopausal breast cancer cases per year as it is such a common cancer. For males, colorectal cancers had the greatest number attributed to EBW (212 cases annually), comprising 16% of all male colorectal cancer cases and 58% of all male cancers causally attributed to EBW.

Pancreatic cancer was not included in the analysis as the international literature available did not meet our inclusion criteria regarding WHO BMI categories. However, the most recent IARC paper on cancers and association of body fat and cancer risk19 includes pancreatic cancer. Analysis using the same methodology identifies that of the 2,229 cases in females over the 10-year period 2003-2012, 380 cases (38 annually) are attributable to EBW. This accounts for 17% of all female pancreatic cases. For males, the figures are 340 cases (34 annually) and 14% of all pancreatic cancers.

There are some limitations in the derivation and application of attributable risk fractions. In the calculation of the PAF, the methodology depends on the accuracy of the RR identified and the prevalence measures of exposure. The meta-analyses used to obtain the RR fraction are themselves only as robust as the primary research studies used in their analysis. Some primary reports calculated BMIs using measured height and weight data, others used self-reported data. Whilst most RR in the epidemiological literature were broadly similar, different RR do exist, particularly for colorectal cancer. A weighted fraction from SLAN 2007 data was applied to improve the accuracy of the exposure measurement. This was generated using the measured BMI data as a comparator to the self-reported data. Whilst this fraction may not accurately reflect the self-reporting of BMI data in 2002, it is the closest Irish proxy measure for under-reporting BMI measurements. It must also be considered that removal of exposure does not reduce risk to zero in either the individual or the population because of the multiplicity of other significant risk factors for a complex disease such as cancer. However, the PAFs do estimate the potential reduction in the risk of a particular cancer which can be seen, at both an individual and population level. It should also be noted that there is a long lag-time between EBW and onset or death from a particular cancer. Therefore, the cancer burden from 2003-2012 most likely reflects EBW patterns from the 1980s and 1990s.

A clear and concerted information campaign for both healthcare professionals and the public is needed to highlight the risk of EBW and cancer. Further initiatives must be taken to counteract obesogenic environments and facilitate necessary behaviour change. The recently published ‘A healthy weight for Ireland: Obesity policy and action plan’ will hopefully provide a successful framework for this20.

Conflicts of Interest:
The authors have declared that they have no COI in this work.