We describe the case of a 61-year-old immunocompetent male who developed septic shock and multiorgan failure due to Capnocytophaga canimorsus (C. canimorsus) bloodstream infection, sustained from a dog bite. Unusually, this patient developed acute liver failure and splenic infarction in addition to many of the better-known clinical sequelae of C. canimorsus infection.

The case highlights Capnocytophaga canimorsus (C. canimorsus), sustained from a dog bite, as a rare cause of sepsis in the intensive care unit (ICU). C. canimorsus is a fastidious organism which normally resides in the oral cavity of cats and dogs. Its virulence relates largely to immunocompromised individuals, with alcoholism and asplenia as two well recognised risk factors. Arriving at a diagnosis of C. canimorsus infection can be challenging given its ability to evade the host immune system and its broad range of clinical presentations. Fortunately, it is susceptible to a broad range of antimicrobial agents. We present the clinical course of the disease in this particular case, including the diagnostic and management issues and some rare physiological findings.

A 61-year-old previously healthy male presented to the emergency department after a 24-hour prodrome of rigors, drowsiness, abdominal pain and diarrhoea 72 hours following a dog bite. On presentation, he had a tempertaure of 40.7°C, was tachycardic (100-110bpm), hypotensive (88/66mmHg) and saturating at 92% on room air. He had a fluctuating level of consciousness and was clinically hypovolaemic. The site of the dog bite on his left calf appeared clean. Initial blood tests revealed a leukopenia (WCC 1.2 x 109/L), coagulopathy (platelets 27 x 109/L, PT 25.5, INR 2.2, APTT 91.5, fibrinogen 0.94g/L), an acute kidney injury (urea 10.8mmol/L, creatinine 172μmol/L) and a lactataemia of 7.5mmol/L. CT mesenteric angiography demonstrated reduced perfusion of the kidneys and spleen.

Antimicrobial cover included Meropenem 2g 8 hourly, Amoxicillin 2g 4 hourly, Gentamicin 400mg and Vancomycin 1.75g. The patient demonstrated a short-lived response to fluid resuscitation with a fall in lactate from 7.5mmol/L to 4.8mmol/L. Four hours post-presentation, however, he sustained a sharp deterioration becoming hypoxaemic, hypotensive and increasingly lactataemic (lactate 7.1mmol/L). He was intubated, ventilated and transferred to the ICU.

In ICU, he was commenced on noradrenaline and continuous renal replacement therapy. The lactate level rose to 9.2mmol/L. An echocardiograph revealed a septic cardiomyopathy with global hypokinesia and a left ventricular ejection fraction of 43%. Dobutamine was added. Extensive skin necrosis of all four limbs developed. His liver function was significantly impaired with a blood glucose of 3.4mmol/L and peak values of ALT of 2192 IU/L, AST 4821 IU/L and INR 2.73, prompting use of an  N-acetylcysteine infusion. Initial blood cultures revealed a slow-growing, gram negative bacillus, confirmed as C. canimorsus on day 6. 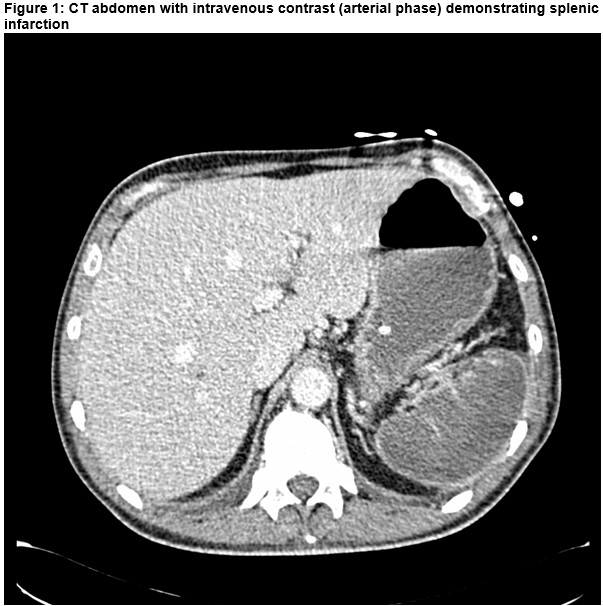 Extubation was achieved on day 5 and vasoactive agents ceased on day 6. Areas of skin necrosis on his left leg were debrided in the operating theatre. A repeat CT abdomen demonstrated complete splenic infarction prompting the addition of prophylactic phenoxymethylpenicillin. Due to persistent renal dysfunction tranisiton to intermittent haemodialysis was required.

C.canimorsus is a fastidious, slow growing gram negative bacillus which is part of the normal gingival flora of cats and dogs. It is a rare cause of sepsis in the ICU with an unknown incidence in the Irish population. The incidence in the Netherlands has been quoted as 0.65 cases/million1 and in Denmark as 0.5/million2. Cases of C. canimorsus sepsis usually occur after a cat/dog bite in immunocompromised patients, particularly those who are asplenic or alcoholic3. Interestingly, cases in immunocompetent individuals and those with relatively innocuous contact with pets have also been described4, 5.

The clinical sequelae of C. canimorsus infection include septic shock, disseminated intravascular coagulation, thrombotic thrombocytopenic purpura, haemolytic uraemic syndrome, acute renal failure, meningitis, endocarditis and septic cardiomyopathy6-9. Acute liver failure, whether due to a prothrombotic tendancy or initial hypotension, remains an unusual presentation with no documented cases in the most recent or largest studies 9. Similarly, splenic infarction is a rare manifestation of this disease 10.

In conclusion, this case highlights a rare case of sepsis due to the fastidious yet susceptible organism Capnocytophaga canimorsus in an immunocompetent patient following a dog bite. In addition to many of the well known clinical sequelae of this infection, this patient also developed acute liver failure and splenic infarction.

Conflicts of Interest
None declared