The safest way for children to travel within a car is by provision of a weight-appropriate safety-seat. To investigate this, we conducted a cross-sectional study of adult parents who had children under 12 years, and collected information related to: car use, safety-seat legislation, and type of safety-seat employed. Data were reviewed on 120 children from 60 respondents. Ninety-eight (81.7%) children were transported daily by car. Forty-eight (81.4%) respondents were aware that current safety-seat legislation is based on the weight of the child. One hundred and seven (89.9%) children were restrained during travel using a car safety-seat. One hundred and two (96.2%) safety seats were newly purchased, installed in 82.3% (88) cases by family members with installation instructions fully read in 58 (55.2%) cases. Ninety-nine (83.2%) children were restrained using an appropriate safety-seat for their weight. The results show that four out of five families are employing the most appropriate safety-seat for their child, so providing an effective mechanism to reduce car-related injury. However, the majority of safety-seats are installed by family members, which may have child safety consequences.

Motor vehicle accidents are one of the leading causes of death for children. Between 1997 and 2009, 30% of child fatalities from road traffic accidents involved not using a child restraint or safety belt1. The safest way for children to travel in a car is with a weight-appropriate safety-seat2. Safety-seats that are properly fitted keep the child restrained within their seat and absorbs some of the impact force. The use of safety-seats can also reduce “seatbelt syndrome”, where the positioning of adult belts can cause life-threatening spinal or abdominal injury. The use of child restraints reduces the risk of death due to a motor-vehicle crash by 71% for infants and by 54% for toddlers, while booster seat use reduces the risk of serious injury among children ages 4-7 years by 59%2. European child safety protection laws make it compulsory for all children up to 36kg to travel in a car in the correct child seat, booster seat, or booster cushion3,4. The appropriate seat type is based on weight. Rearward-facing baby seats (Group 0) are most appropriate for babies up to 13kg, forward-facing child seats (Group 1) for children between 9-18kg, booster seats (Group 3) for children between 15-25kg and booster cushions (Group 4) for children between 22-36kg3. The aim of this study was to examine the use of and types of safety-seat chosen and to assess the motivating factors in safety-seat selection.

This was a cross-sectional study to determine the prevalence and factors associated with car-safety seat use among families presenting to the Paediatric Department within University Hospital Limerick between April and June 2013. The study examined specifically those children presenting to the out-patients department and paediatric day-unit. Inclusion criteria included: English-speaking; parent over 18 years who drives a car; and children under 12 years. Exclusion criteria included parents who were unable to drive and children who presented as a result of trauma or accident. Eligible parents were randomly sampled within the department and invited to participate after consent. A pilot study was carried out on an initial set of 20 respondents to evaluate the questionnaire and the data obtained in order to assess for ambiguous questions within the questionnaire. This allowed for the referral data to be analysed and discuss any potential sources of ambiguous information. This initial pilot data recorded was not included in the final analysis. Institutional ethical approval was obtained. Eligible parents were systematically approached between 9am and 5pm, Monday through Friday. Information was collected by the researcher on: the parent’s gender, number of dependent children under 12; child age, gender, and weight; frequency of car use, knowledge of existing legislation in relation to safety-seat usage, type of current safety-seat employed; reasons for safety-seat choice and method of safety-seat installation. Researchers determined appropriateness of the choice of car seat based on the weight of the child. Each survey required approximately 8 minutes to complete. In order to obtain approximately equal proportions for each of the car safety-seat group, weight status was divided into four groups (<12kg, 12-17kg, 18-24kg, >24kg) and data collected with equal contributions to each grouping. Data were collected and entered into spreadsheet form using Microsoft Excel and subsequently analysed using SPSS version 20. 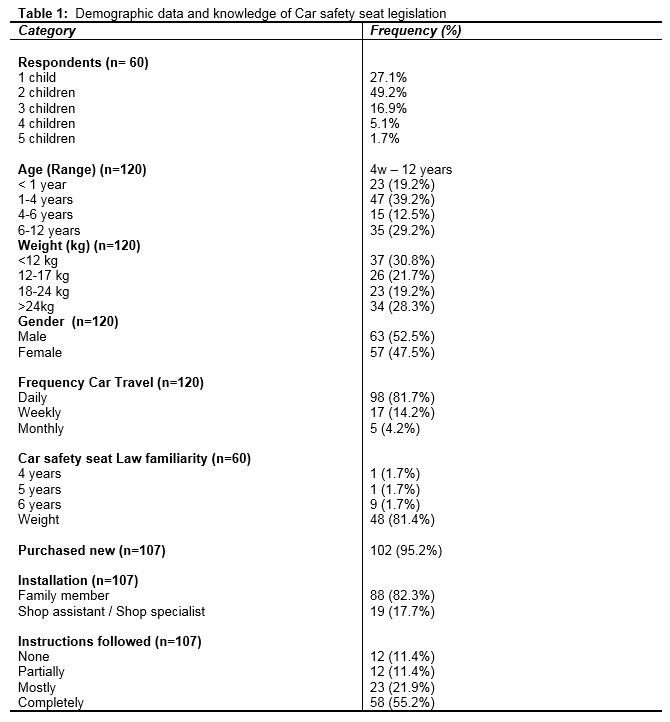 Car safety-seat data were included from 60 parents referring to 120 children. Children had a mean age of 4.5 years (range 4 weeks-12 years), mean weight of 19.3 kg (range 3.5kg-61.5kg) and 52.5% were male. 81.7% of children were transported by car daily, with all children being transported at sometime within a calendar month. Forty-eight (81.4%) respondents were aware that car seat use is currently based on the weight of the child. Of those children restrained using safety-seats, 95.2% (102) were newly purchased. Eighty-eight (82.3%) safety-seats were installed by family members themselves, of whom 55.2% (58) completely read the instruction manual prior to installation. 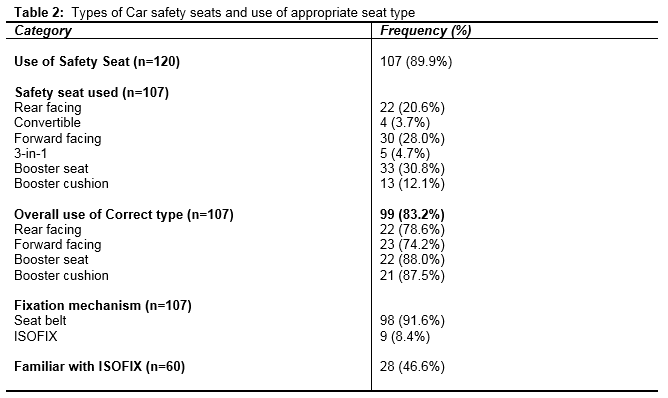 The use of child restraints reduces the risk of death due to a motor-vehicle crash by 71% for infants and by 54% for toddlers5,6. Booster-seat use reduces the risk of serious injury among children ages 4-7 years by 59%2. Belt-positioning booster seats, suitable for children aged 4–7 years provide around 50% greater protection to the children wearing them than do adult seat-belts6. Thus the use of appropriate car safety-seats is an extremely important mechanism in protecting children during car travel. In this study, over 80% of children were transported daily by car; this high usage may be explained by the lack of local alternative transport options. Current legislation dictates that appropriate child safety restraints be selected on the basis of the weight of the child with over 80% respondents aware of this law. The majority of safety-seats employed were purchased new with 82% installed by a family member and only half fully reading the accompanying instruction manual. This offers potential for making installation errors and subsequent child safety consequences when travelling. This is an important factor in relation to overall child safety when travelling by car as, studies of rear-facing, forward-facing, and booster-seats checked by certified technicians, 93% were either misused or incorrectly installed, and the two most common errors were the vehicle safety belt not holding the car seat tightly in the vehicle, and the harness straps not snug against the child7. In a car crash, installation errors like these could result in the child or the seat acting as projectiles. There is a public health onus to support parents making informed choices in car seat selection and ensuring correct fitting of car seats.

The ISOFIX mechanism is the international standard for attachment points for use with child safety seats, providing a secure alternative to seat belts and is the easiest and quickest way to install a car seat correctly3. The name ISOFIX stands for ISO (International Standardization Organization) plus FIX (Fixation). All vehicles produced since February 2013 are required to have ISOFIX attachments. Studies have shown that 96% of ISOFIX seats are installed correctly and it is this increased proportion of correctly fitted seats that is the major advantage for the use of this system over standard seat-belts8. Studies are ongoing examining for the ISOFIX mechanism and superior protection performance, but awaits conclusive evidence9. The results from the current study show that half of the parents were unaware of ISOFIX and 8% used ISOFIX. However, it was beyond the scope of the current study to examine the car type and year of manufacture and thus this low proportion of respondents may be the result of the year of car manufacture. Ninety percent of respondents were found to use a car safety-seat with the remaining 10% accounted for by children of an older age and weight that were using an adult seat-belt mechanism, which when further assessed on the basis of weight was appropriate in all but 2 cases. In the United States in 2010, failure to restrain children in a car was reported in 4% of children less than 4 years old, and 9% of 8-12 years old10. In Australia in 2008, of 30,631 children under 13 years old, 92.0% were restrained in some fashion, 84.7% by seat belts and 7.3% in child restraints; and 21% were seated in the front seat11. Additionally, unrestrained children had 3-4-fold higher risks of serious injury11. In our study, 83% of children were using a weight-appropriate safety seat and this is higher than in previous studies10.

Our study has limitations. It was conducted on a single site within a single region of Ireland and thus the results may not be generalisable to all populations. It was beyond the scope of the current study to do an in-depth analysis of the car type and year of manufacture or to include real-time observational studies but this is an interesting area for further study. Additionally, parental recall bias may have affected the results.

7. Paquin M, Validzic A, Khaw L, Morabito D, Knudson MM: Holding on to your kids: a report on car seat safety in San Francisco. The California journal of emergency medicine / California Chapter of the American Academy of Emergency Medicine 2002, 3:21-23.