The annual incidence of paediatric arterial ischaemic stroke ranges from 1.8 to 7.9 per 100,000 children per year1. PCS is less common than anterior circulation stroke (ACS) and risk factors and recurrence may be different2. There appears to be a high association with vertebral artery dissection in PCS even in the absence of trauma, and confirmation of this can be difficult3.

A previously healthy 16-month-old male presented with a short history of irritability, vomiting and a brief focal seizure of his right arm and face. There was no preceding trauma, illness or substance ingestion. Ataxia was the only abnormality on examination. Bloods, electrocardiogram (ECG) and echocardiogram (ECHO) were normal. Electroencephalogram revealed focal left posterior temporal and occipital delta waves but no epileptiform activity. Computerised Tomography (CT) of his brain identified an area of low attenuation in the left posterior parietal lobe and Magnetic Resonance Imaging (MRI) confirmed changes consistent with acute infarction within the left proximal posterior cerebral artery (PCA) territory distribution.

No abnormality was reported on a dynamic contrast-enhanced MR Angiogram (MRA) of his head and neck. He fully recovered on aspirin and phenytoin. Ten days later he represented with irritability, drowsiness, vomiting and left sided weakness. He was ataxic with a left hemiparesis. Repeat MRI revealed new diffusion restriction changes in the posterior circulation territory. Fat suppressed Axial T1 weighted imaging of the neck vessels and a repeat contrast enhanced MRA of the neck revealed a left sided vertebral dissection at C1-C2 level. A collagen vascular disorder screen was negative. He fully recovered on subcutaneous heparin and phenytoin. Repeat MRI showed no resolution of the dissection. Phenytoin was discontinued and oxcarbazepine started. He remains on aspirin at his parent’s request with only one seizure a year later.

A 4-year-old girl presented with vomiting and unsteadiness with a recent history of lethargy, headache and an unexplained fall. She had a previous history of cyclical vomiting and a maternal history of migraine. On examination, she had brisk upper limb reflexes and mild ataxia. An ECG, ECHO and bloods including coagulation and thrombophilia studies were normal. CT brain revealed bilateral low attenuation areas in the cerebellar hemispheres. MRI confirmed multiple areas of high signal on T2 and corresponding abnormalities on FLAIR and diffusion confirming ischaemic injury in the cerebellar hemispheres and left occipital areas.

A contrast enhanced dynamic MRA was reported as normal. A posterior circulation vasculopathy was the most likely cause but consent was not obtained for further imaging. She made a full recovery on aspirin. A repeat MRI and MRA three months later showed resolution of the abnormalities in the left occipital lobe and two areas of gliosis in the cerebellum. A subtle irregularity of the distal basilar artery was noted and retrospectively was present on the previous MRI in keeping with a diagnosis of focal cerebral arteriopathy (FCA) (Fig. 1) She has no neurological sequelae. 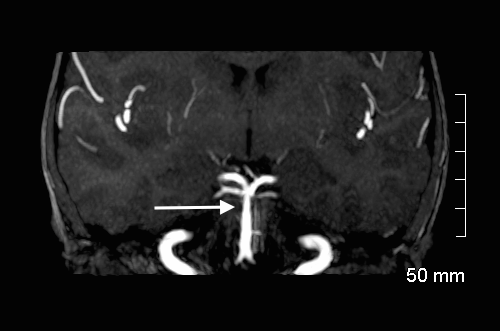 Children with PCS can present with variable symptoms including hemiparesis, headache, reduced conscious level, neck pain, focal seizures and ataxia, which are common to both ACS and PCS3. Vertebral arterial dissection accounts for 50% of all PCS in large case series3,4, but less than 10% of ACS.  Estimates of recurrence for all strokes range from 6.6 to 20%. The rate for PCS from published case series varies from 20 to 50%; highest in patients with arteriopathies and cardiac disease5.

The American Academy of Neurology and the Royal College of Physicians UK recommend MRI for diagnosis of childhood stroke or CT where MRI is unavailable for 48 hours6,7. Further assessment should include MRA or CT Angiography of the head and neck, and where necessary axial fat suppressed T1 weighted imaging of the neck to evaluate for dissection. The most sensitive imaging modality has not been established in children with PCS but there is a case for catheter angiography where a definitive diagnosis cannot be made with non-invasive imaging. This is particularly important in those with multiple infarcts and when vertebral artery dissection is suspected4.  There is currently no clear consensus on the optimal management of children with PCS, as to date there is no strong evidence for anticoagulation over antiplatelet therapy. However, there are recommendations that anticoagulation should be considered for those with PCS found to have vertebral artery dissection7,8.

The authors have read and understood the IMJ policy on declaration of interests, and declare that they have no competing interests.