Effect of the 2008 economic crisis on the cardiovascular mortality of the Irish population: an ecological 12-year study of a heart-broken Celtic Tiger.

Introduction
Global macroeconomics tends to fluctuate between business cycles of expansion and contraction of variable duration. Economic recession is considered one of the major psycho-social stressors with established increase in mental and physical health related mortality across all age groups, most likely due to high levels of unemployment1. The impact of financial factors on public health indices has been the subject to substantial scientific research. However, the results were rather mixed, and explanations for such effect were numerous and conflicting2,3. A positive association between economic difficulties and cardiovascular mortality was established by recent research4. Psychosocial distress, which accompanies economic hardships, was linked to rise in population rates of cardiovascular mortality5. The global economic recession started in mid-2008 and has intensely affected the Republic of Ireland. A range of austerity measures were undertaken, unemployment soared, and the Irish GDP growth fell below zero6. The objective of this investigation was to evaluate the effect of the 2008 financial crisis on the mortality associated with major cardiovascular diseases; namely ischaemic heart disease IHD, acute myocardial infarction MI, and cerebral-vascular accident CVA, in the Republic of Ireland.

Method
The Central Statistics Office of the Republic of Ireland published mortality data in Ireland between 2001 and 2012 on its free-to-access website7. We compared the deaths related to IHD, MI, and CVA before and after the year 2008 (when the economic crisis started), taking the downward trend of cardiac deaths into account using a negative binomial regression approach, and we adjusted for the population count by including an offset term representing the yearly population estimate. We evaluated the effect of the economic crisis in the model by including a step term set to be one only from the year 2008 onward and zero otherwise. Bonferroni correction penalty for multiple modelling was adopted; a statistical significance at the 5% level requires p< 0.006. Statistical exploration was completed using the R statistical package version 3.1.2.

Results
During the period 2001-2012 the annual deaths related to IHD, MI or CVA in Ireland were slowly falling for males and females (Figures 1a and 1b). Throughout the 12-year period a total of 63,408 deaths were ascribed to IHD, 33,977 of which were caused by acute MI. Further 24,839 deaths were attributed to CVA. The average annual deaths by IHD were 5,553 deaths a year prior to the economic crisis and 4,907 afterwards. During the 2007-2010 period, in females, the CVA mortality rate exceeded the MI mortality rate (See Fig. 1b), otherwise, the CVA mortality rate has always been less than the MI mortality rate, with the IHD mortality rate staying superior to both in males and females. The effect of the economic crisis on the overall IHD deaths was modelled using the negative binomial regression with time in years serving as an explanatory variable. The crisis coefficient in the model was 0.045 (95% Confidence Interval CI: -0.025 to 0.116) clearly statistically not significant (p-value = 0.209). This suggests that there was no alteration to the rate of IHD-related death after 2008. Similarly, the effect of economic crisis on the rate of MI was not significant, estimated at 0.003 (95% CI: 0.074 to 0.080, p-value = 0.061). On the other hand, the effect of economic crisis on the rate of CVA-related death was strongly significant at 0.159 (95% CI: 0.106 to 0.212, p<0.001). This can be interpreted as an increase by 17.2% in CVA-related deaths during the financial crisis years (95% CI: 11.1% to 23.6%). 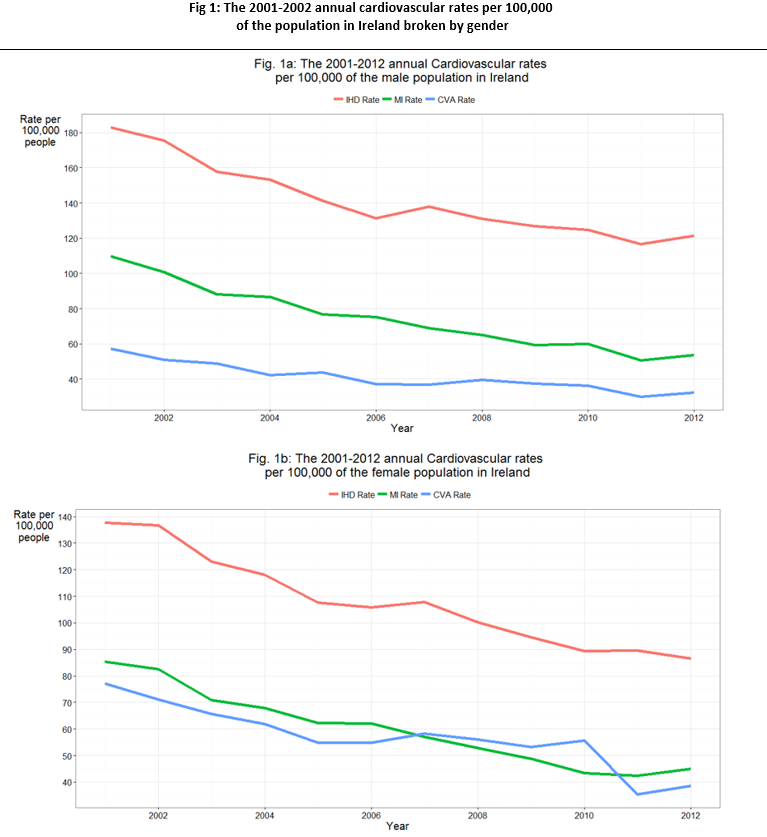 Discussion
In agreement with current European and American studies8,9, the findings of our study confirm the overall decline in mortality rates due to IHD, MI, and CVA over the past decade in Ireland. Trends of IHD, MI, and CVA mortality were decreasing internationally over the last number of decades, likely because of improvements in primary and secondary preventative and treatment methods9.Our study found no significant effect for the 2008 financial crisis on the overall deaths caused by IHD or MI. However, we found a statistically significant increase, post-2008, by 17.2% in CVA-deaths. This finding indicates an increase in Irish deaths attributed to CVA following the economic recession. In a similar study, the 2008 recession was found to have increased stroke-related deaths in California, more specifically for males10. Also, the trend of stroke deaths in England was noted to have increased after 200811. The Irish CVA-related mortality, as per our findings, is in line with the reported international data. On the contrary, a South Korean study indicated that CVA-related deaths dropped slightly between 1996 and 2002, and, therefore, contributed largely to all-cause mortality decline during the 1997 economic recession12.

Breaking up the mortality data according to gender, we found that CVA mortality rates have increased significantly following the economic recession for both genders. However, females IHD and MI mortality rates increase has not been significant. Recent research found a post-2008 surge in MI incidence in Greece for both genders13. It is likely that, given the many socio-economic similarities, a similar picture may have occurred in Ireland, however, it is less clear how a differential mortality was observed according to Irish patients’ gender. A recent study indicated that economic recession may increase the cardiovascular mortality of specific occupations; namely managerial positions and professional workers14.It is very difficult, however, to explain the findings of our investigation of an increase in MI mortality in Irish men rather than women. The main mechanism behind the clear post-2008 increase in IHD death rates in Irish males, and CVA related mortality across the Irish males and females could be connected to sudden job loss and uncertainty caused by economic difficulties. Loss of income was theorized to invoke feelings of shame and mistrust that can trigger a stress-related psycho-neuro-endocrine reaction which puts vulnerable individuals at an increased risk of developing cardiovascular diseases15.

Further research direction should specifically examine the cardiovascular mortality amongst different age groups, different professional roles, and different regions in Ireland. Our findings have public health and occupational health implications. It might be prudent, during the times of financial hardships to predict a surge in CVA and IHD mortality specifically in males. Counteracting the effects of economic recession, for instance facilitation of re-employment, may help prevent a sizable portion of such mortalities. one limitation of our paper is reliance on the reported cause for deaths as per death certificate. Also, the data was collected annually. Certainly, monthly or weekly data could have led to more focused analysis. However, the data spanned 12 years and that can be a particular strength to our study. To our knowledge this is the first study to specifically evaluate the effect of the economic crisis on cardiovascular mortality rates in Ireland.

Conflict of interest
The authors declare that they have NO financial or non-financial interest in the subject matter or materials discussed in this paper.