Fancy a cup of scald? – The role of hot beverage burns in paediatric burns admissions in Ireland

Burns and scalds are preventable injuries in children that typically occur in the home. This study aimed to examine the role of hot beverage scalds in paediatric burn admissions in order to identify key target audiences for future safety strategies. Using the Hospital Inpatient Enquiry System (HIPE) a retrospective study of paediatric burn admissions in 2014 examined demographics, cause and severity of injury and location of occurrence. There were 233 paediatric discharges (age 0-18 yrs.) with a principal diagnosis of burn injury; 57% of these occurred in children under three years and 95% of these occurred in the home. Scalds caused 74% of burn injuries; hot beverages accounted for least 33% of these of which 77% were partial thickness and 73% were upper body burns. Effective hot beverage scald prevention strategies, targeted towards caregivers in the home, are required.

Introduction
It is estimated that 265,000 deaths globally are caused by burns. Children are particularly vulnerable to burns, which, worldwide, are the 11th leading cause of death of children aged 1-9 years, and are the fifth most common cause of non-fatal childhood injuries1. With advances in surgical and dressing techniques, death rates from burns have been declining. However, in comparison to the other types of unintentional injuries in children, a higher proportion of burn patients require hospital care, and many endure longer hospital stays and undergo more critical treatments2. The simplest definition of a burn is that it is damage to the skin or the underlying tissue by heat, chemicals or electricity.  A scald is a burn whose cause is hot liquid or steam3. Burn severity is classified as partial thickness or full thickness. Superficial burns are limited to the epidermis, but can cause redness, pain and swelling. Partial thickness burns involve part of the dermis.  Scarring with these burns is common and may be severe. Full thickness burns extend through the entire dermis and into the underlying fat and usually require excision and skin grafting4. Young children in their first three years of life have been found to be particularly vulnerable to injury from burns or scalds. They are naturally curious and have a keen interest in exploring their environment5. Infants and toddlers do not understand the risks associated with hot liquids and objects that may burn or scald them6. They are likely to want to be close to their caregiver, so they are more likely to be in the kitchen when the caregiver is cooking etc7. In addition to these psychological and cognitive characteristics, children in this age group also have a number of physical characteristics that can leave them vulnerable to burns and scalds. The surface area of a young child’s body is relatively small so a small amount of hot liquid can cause a large area of damage. This is particularly so with scalds as they usually are caused by liquid falling from a height relative to the child’s small body. A child’s skin is thinner and more sensitive than an adult’s. The result of these factors combined is that young children are particularly at risk of suffering severe injuries from scalds or burns8. Most people associate burns with flame although they are caused more often by liquid9. Parents do not always recognise or anticipate the risk for burns and scalds. This may explain why interventions have been ineffective6.

A “cup of scald” is an Irish slang term often used affectionately when referring to the beloved cup of tea.  Indeed the humble cup of tea is an extremely popular drink in Ireland and a recent study by the European Food Safety Authority found that Ireland’s intake of caffeine from tea surpassed that of other European Countries10. Hot beverage burns account for a high percentage of burn injuries. A recent Cardiff study included two Irish hospitals, and found that hot beverages accounted for 49.6% of scald injuries11. Hot beverages accounted for 65% of scald presentations to an urban Irish ED with tea alone accounting for 28%12. A child’s skin is estimated to burn in a quarter of the time needed for an adult. Children exposed to water at 60o Celsius for 5 seconds will sustain a full thickness burn. This can occur in 1 second at 68oC13.  A UK investigation of the temperatures of common beverages made in the home found that milky beverages had the lowest starting temperatures but these were still high, 75-77oC. Equally alarming is the fact that black tea and coffee remained at temperatures greater than 65oC degrees even after 10 minutes of cooling14. Therefore even adding cold milk or letting the beverage cool for 10 minutes does not remove the potential for our “cup of scald” to cause a full thickness burn in a child, and our affectionate slang term acquires a far more sinister undertone (Figure 1)

A recent overview of systematic reviews of interventions in relation to scalds in the home found that while some interventions are effective in relation to promoting safe hot water temperature there was no consistent evidence to support interventions on the safe handling of hot food or drinks, nor improving kitchen safety practices15.

Methods
This study aimed to examine the role of hot beverage burns on paediatric burn admissions in order to identify the key target audiences for future safety strategies. A retrospective study of all children admitted for treatment of a burn or scald was performed for 2014. Injured children under the age of 18 years were identified using the Hospital Inpatient Enquiry system.  Detailed analysis was performed on all discharges coded as a burn injury, in children under the age of three, and Microsoft Excel was used for further analysis. The variables examined were age, gender, all recorded diagnoses, principal procedure, type of injury sustained, the cause of the injury, and the location where the injury occurred. The subset of cases where scald was reported as a secondary diagnosis were then scrutinised as to the cause and severity of the scald, and the part of the body affected. 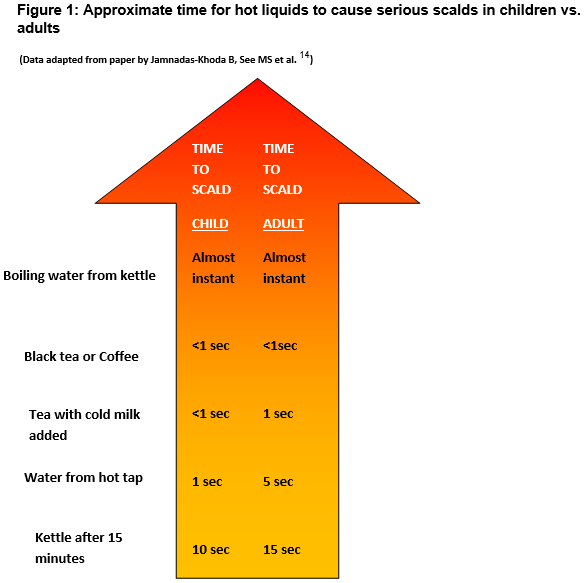 In 2014, there were 233 paediatric discharges whose principal diagnosis was cited as a burn injury and 52.4% of these occurred to male children. Some 66.5% (157) of burn injuries to children occurred in the home. 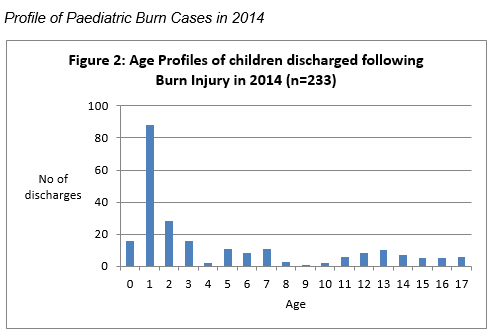 Burns and scalds in Children aged 0 - 2
In the 0-2 age group, rates of hospitalised burns were higher for males, 59.1% while 95% of burns and scalds to children of this age group occur in the home. In 2014, 70% (90) of burn injuries to children were partial thickness burns while 5% (7) were full thickness burns. Of these injuries, 58.6% (75) affected the upper body, while over half of these affected the head and neck. 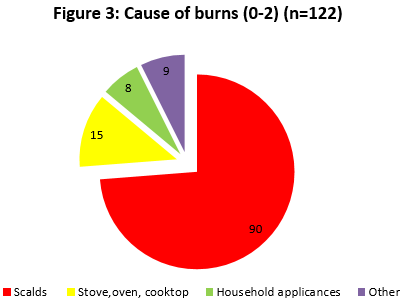 Cause of Scald Injury
Secondary diagnosis regarding the cause of injury was indicated for 92.4% (122) of diagnoses. Of this figure, we categorised 73.8% (90) as scalds, the injuries that were caused by contact with hot liquid or steam. 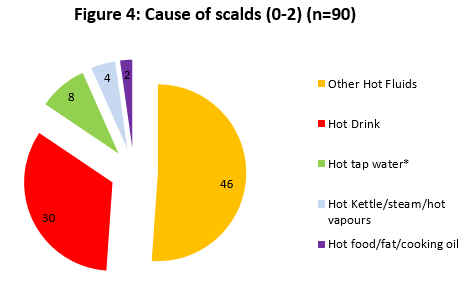 Further analysis of these scalds (Figure 3) reveals that at least 33% (30) of scalds to children of this age are caused by hot beverages. As the ‘other fluids’ category comprises a large portion (51% or 46) of scalds it is possible that many more hot beverage scalds may be classified in this category, particularly as hot water, cooking oil and hot kettle scalds are classified separately. The consequence of a hot beverage scald was an average length of stay of 6.8 days, with 73% (22) of injuries affecting the upper body and 77% (23) classified as partial thickness burns.

Discussion
Our study examined paediatric burn injuries with a specific focus on those caused by ‘hot beverage’ scalds in children under three. It is widely accepted that for each death or hospitalisation that occurs, many more injuries are treated in the home, by the general practitioner, or in the Emergency Department16. However, focusing on admissions means that the most severe of injuries are analysed, and while there are some Irish data on the burden of hot beverage scald injuries in emergency departments11,12, very little data exist as to the impact of injuries caused by hot drinks on admission rates.

This report shows that burns/scald injuries are a significant problem in Ireland particularly in relation to children under three. Some 95% of burns to children of this age occur in the home compared to 66% of burns to children aged 0-18. Hot beverage scalds are a particularly common injury that tends to occur within the home. These findings are similar to previous work by Yates, McKay and Nicholson in 2011,12 in which the typical burn/scald patient was described as “a pre-school child sustaining a scald injury from a hot beverage”. Injuries caused by a simple hot beverage can be devastating particularly to a child under the age of three. In fact, 77% of ‘hot beverage’ scalds resulted in partial thickness injuries which may result in scarring up to severe levels. Also of note is the fact that almost 73% of scalds from ‘hot beverages’ resulted in upper body injuries. These figures are higher than the corresponding figures for overall burns in children of the same age (70% partial thickness and 59% upper body). Any resultant scarring or disfigurement is therefore more likely to be found on the head, neck or upper limbs. Burns and scalds to the hand in a toddler can be extensive, and the resulting contractures and scarring can be associated with long-term disability11.

The major weakness of this report was that the data source reflected the most severe burns and scalds only. Data available related to principal diagnoses of burns, and scald data was only available as a secondary diagnosis. This meant that analysis of the scald subset followed injuries rather than cases. The high percentage of unclassified hot liquid scalds was also an issue. While there are ongoing improvements to the HIPE database, limitations have been documented17 such as inter-rater reliability issues and entry duplication. A more complete report would include Emergency Department data along with data from Primary Care Teams. Detailed Emergency Department data are available from some specific centres and should be more readily accessible from all centres. Yates et al12 report causal agents, first aid at site of injury and relevant timelines, rich data which have the potential to inform timely treatment strategies.

Hot beverage scalds are common and frequently occur in children under the age of three in their own homes. These injuries cause significant morbidity. Prevention strategies need to engage carers and inspire behavioural change. The image of the “cup of scald” as a benign source of comfort needs alteration. Rather we must endeavour to paint a picture of an agent that has the potential to cause a full thickness burn even after cooling for 10 minutes with the addition of milk, a fact that one would surmise is little-known among the general population14.

Burns and scalds are preventable injuries that can happen in seconds but leave physical and psychological scars that last a lifetime. The most successful burns prevention campaigns have targeted specific types of burn injuries or specific populations. Therefore, it is essential that an effective hot beverage scald prevention campaign is developed, implemented and is targeted towards parents and caregivers of young children under the age of three years in the home. To facilitate the transmission of a sustainable message to caregivers, targeted interventions should be considered as part of the HSE Child Safety Awareness Programme and National Healthy Childhood Programme.