The case of a giant thoracic desmoid tumour in a 44-year-old woman, who presented two years following a breast reconstruction with a latissimus dorsi (LD) flap and implant, is reported. Clinical findings included a rapidly growing, painless mass. Computed tomography (CT) suggested skin and intercostal soft tissue invasion. The tumour was resected en bloc with the LD muscle, implant capsule and underlying rib segments. The resultant thoracic and abdominal wall defects were reconstructed with Dualmesh® and polypropylene meshes respectively. There was no evidence of recurrence at thirty-six months follow-up.

Desmoid tumours are rare, locally aggressive mesenchymal neoplasms characterised by infiltrative growth patterns and a tendency towards local recurrence. They are classified as either intra-abdominal, abdominal or extra-abdominal1. They account for 0.2% of breast tumours2. The clinical presentation is variable3.

A 44-year-old woman presented with a four-month history of a rapidly enlarging thoracic mass. Four years prior to presentation, she received neo-adjuvant chemotherapy prior to a mastectomy, axillary clearance, adjuvant radiotherapy and tamoxifen to treat an invasive ductal carcinoma. Twenty-one months later, a delayed reconstruction was performed using a latissimus dorsi (LD) myocutaneous flap inset over a silicone implant. The patient re-presented two years later with a large painless mass centered over the lower pole of the implant. The mass was fixed to the underlying chest wall and to a segment of overlying skin at the inframammary fold (IMF).CT revealed a heterogeneous mass arising from the right anterior thoracic wall, inseparable from the pectoral fascia with involvement of the overlying skin at the IMF. Although there was no evidence of direct bony invasion, the mass had expanded the fifth and sixth and sixth and seventh intercostal spaces respectively (Fig1). The implant was displaced superiorly and posteriorly. The differential diagnoses included fibromatosis and fibrosarcoma. An ultrasound-guided biopsy confirmed the presence of a desmoid tumour. 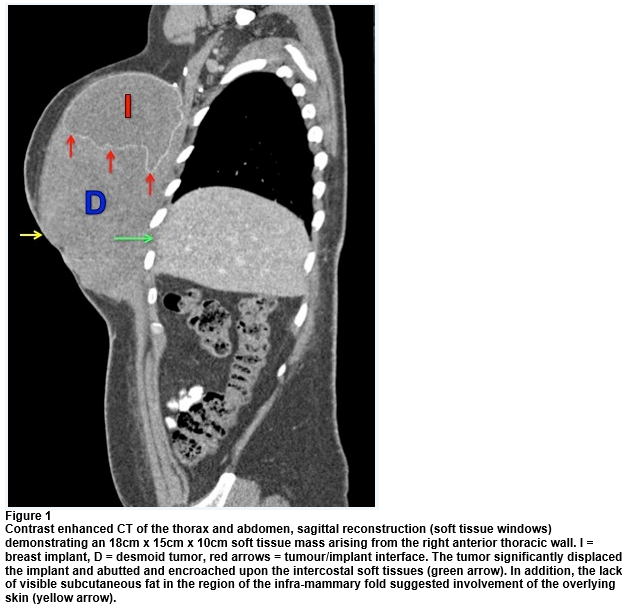 Following multidisciplinary discussion, radical excision was performed via a combined approach by plastic and thoracic surgeons. A transverse skin ellipse was centered on the involved skin in the IMF. A capsulotomy was made 2cm superior to the tumour-implant interface and the intact implant was removed. The tumour was excised en bloc with a 3cm peripheral margin, the LD muscle, the implant capsule and segments of the fifth to tenth ribs (Fig2). Intra-operative frozen sections confirmed clear margins. The resultant thoracic wall defect was reconstructed with Dualmesh® inset with interrupted polypropylene sutures and anchored to the diaphragm. The smooth surface was orientated towards the pleural aspect to provide a gliding surface for lung expansion. The textured surface allows for host tissue ingrowth and was directed to the extra-pleural aspect. The abdominal wall defect was reconstructed with polypropylene mesh. Primary closure was achieved by recruiting the redundancy that was created upon removal of the implant. The post-operative course was uncomplicated. 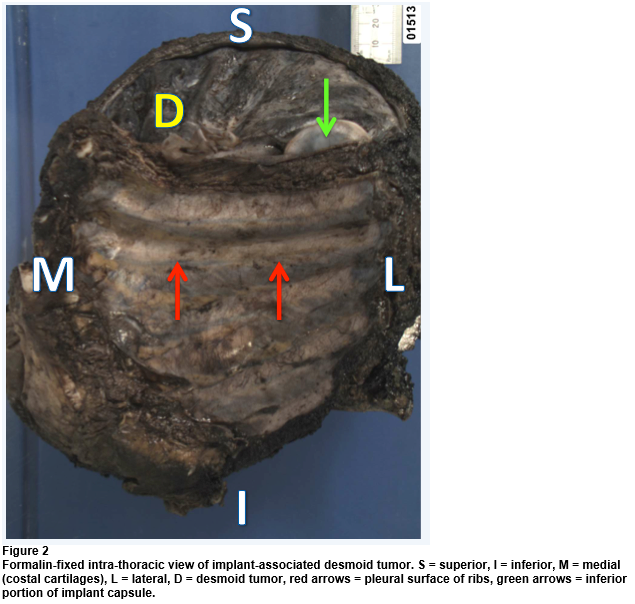 Pathological analysis demonstrated a 23.6cm well-circumscribed mass with a whorled appearance and focal cystic areas. Invasion of the intercostal soft tissues between the sixth and seventh ribs was noted, with no bony or pleural invasion. Haematoxylin and eosin staining revealed a proliferation of elongated, slender spindle cells of uniform appearance traversed by interlacing fascicles of collagen. These features were consistent with an extra-abdominal desmoid-type fibromatosis. There was no evidence of recurrence at thirty-six months follow-up.

The exact aetiology of desmoid tumours remains unknown. Although the majority of cases occur sporadically, a number of factors have been implicated in their pathogenesis, specifically genetic predisposition, high oestrogen levels and tissue trauma2,4. Up to 30% of patients have a history of surgery at the tumour site5,6. Breast implant-associated desmoid tumours arise either in or around the periprosthetic capsule, or are confined exclusively to it4. The tumour described in this case is the largest reported to date7. Although typically slow growing, rapidly progressive lesions may also occur and are typified by aggressive displacement of local tissues. Although CT sufficiently demonstrates tumour characteristics, MRI is superior for delineating chest wall involvement2,8. Ultrasound-guided biopsy is a useful adjunct, although the findings may be non-specific2.

A multidisciplinary approach is recommended. Stable asymptomatic tumours may be observed9. For more aggressive lesions radical surgical excision with negative margins is advocated as a first line treatment. This may, in turn, necessitate chest wall resection and reconstruction to restore function and stability. In the case described, primary closure was achieved by recruiting the redundancy that was created upon removal of the implant. Alternative reconstructive options include a reverse abdominoplasty-type approach and the regional myocutaneous flaps of rectus abdominis, pectoralis major and LD. Negative surgical margins are associated with improved rates of local control10. Recurrence rates range between 18% and 29% in the first two post-operative years. Clinical follow-up is therefore paramount.

I have no conflict of interest to declare.