Immunotherapy- A double Edged Sword; A case of Fatal Myocarditis and Complete Response

Aim
To highlight the potential fatal side effects of novel immunotherapies used in Oncology. We present a case of fatal immune mediated myocarditis following one dose of the immunomodulatory drug Nivolumab.
Methods
Data was collected from the patients’ medical notes, the radiology and laboratory systems of our institution. Histological photographs were obtained from the pathology Department.
Results
Despite the instigation of high dose steroids and supportive care, the patient died 5 days after admission. Her post mortem revealed multi-organ inflammation, congestive cardiac failure and an almost a complete pathological response to her malignancy.
Conclusion
Immunotherapy has the ability to not only induce remission in patients with advanced disease but also the propensity to cause serious autoimmune toxicity. Autoimmune myocarditis, although rare is mostly fulminant and fatal in its course.

Introduction
The programmed death 1 receptor/programmed death ligand 1(PD1/PDL1) pathway plays a pivotal role in the tumour microenvironment allowing tumour proliferation and evasion of the the immune system.1  Nivolumab is a monoclonal antibody which inhibits PD1  and has been shown to significantly improve the overall survival of metastatic non small cell lung cancer(NSCLC).2 Adverse immune events are widely documented with Nivolumab, however, immune mediated myocarditis remains a rare occurrence.3

Case Report
A 79-year-old female ex smoker presented with a two-month history of cough and chest pain. Investigation with computerised topography (CT) of the thorax, abdomen and pelvis demonstrated a 5cm lesion in the right upper lobe and multiple metastatic deposits throughout both lungs. Biopsy confirmed adenocarcinoma of the lung. No targetable mutations were identified. Given her excellent performance status (PS), the patient was commenced on palliative chemotherapy. However she tolerated this poorly and opted to discontinue after one cycle of treatment.

Immune mediate myositis, hepatitis and pneumonitis were suspected. The patient was commenced on high dose intravenous (IV) steroids, IV fluids and IV antibiotics. Despite treatment, the patient developed type two respiratory failure requiring non invasive ventilation. Her troponin continued to rise to a peak of 1333ng/L. No ECG changes were noted and an echocardiogram was normal. A CT pulmonary angiogram failed to demonstrate an acute thrombus but identified bilateral pleural effusions.

Despite escalation of treatment, she continued to deteriorate and died 5 days after her admission.Post mortem noted congestion of the patients lungs and liver, with microscopic examination confirming lymphocytic infiltration of the liver, renal, skeletal and myocardial muscle by T lymphocytes, all of which stained negative for PD1 (Figure 1 and Figure 2).The cause of death was established as congestive cardiac failure due to Nivolumab induced autoimmune myocarditis(AM). Apart from a small sub centimetre area in her liver, malignant cells were not detectable demonstrating an almost complete pathological response after one cycle of immunotherapy. 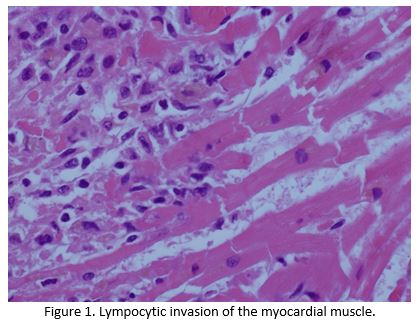 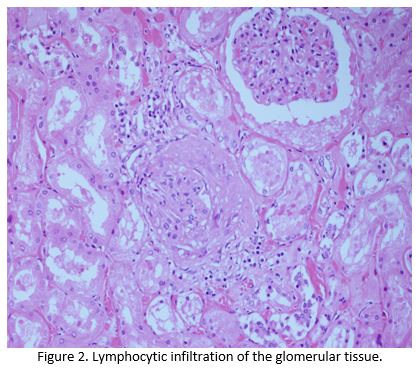 Discussion
Immunotherapy has the ability to produce dramatic and durable clinicopathological response in patients with NSCLC in both the neoadjuvant and palliative setting.2,4Major pathological responses have been seen in the resection specimens of those treated neoadjuvantly with just 1-2 cycles of therapy.4.Similarly, fatal immune mediated toxicities including myocarditis, colitis, pneumonitis and hepatitis have been reported in the literature early in the treatment course.5 Although rare, the incidence of AM is rising 3 ,reflecting the increasing use of immunotherapy in the treatment of malignant disease. The onset of AM is mostly seen within the first 6 weeks of treatment and boasts a high mortality rate of 40-50%. AM is difficult to predict, more often than not occurring in those without a prior cardiac history.3 Nevertheless international guidelines recommend that an ECG and baseline cardiac biomarkers be performed on all patients prior to immunotherapy. These investigations should be repeated in those with abnormal baseline investigations or upon the development of suspicious symptoms. Prompt cessation of immunotherapy, instigation of immunosuppressant’s and urgent cardiology consultation should be sought in those with confirmed myocarditis.5,6