Involuntary psychiatric admission based on risk rather than need for treatment: report from the Dublin Involuntary Admission Study (DIAS).

Aims
Involuntary psychiatric admission in Ireland is based on the presence of mental disorder plus serious risk to self/others and/or need for treatment. This study aimed to examine differences between use of risk and treatment criteria, about which very little is known.
Methods
We studied 2,940 admissions, of which 423 (14.4%) were involuntary, at three adult psychiatry units covering a population of 552,019 people in Dublin, Ireland.
Results
Involuntary patients were more likely than voluntary patients to be male, unmarried and have schizophrenia or a related disorder. Involuntary admission based on the ‘risk criterion’ (rather than the ‘treatment criterion’ or both) was associated with a shorter period as an involuntary patient for patients with diagnoses other than schizophrenia.
Conclusion
If inpatient units are intended as treatment centres rather than risk management units, the balance between considerations of risk and treatment requires careful re-examination in the setting of involuntary psychiatric care.

Introduction
Criteria for involuntary psychiatric admission and treatment vary significantly across countries but generally involve apparent risk to self or others owing to mental disorder, a perceived need for treatment, or both1-3. For involuntary admission to occur in Ireland, the patient must have ‘mental illness, severe dementia or significant intellectual disability’ and fulfil a ‘risk criterion’, a ‘treatment criterion’ or both. ‘Mental illness’ is defined as ‘a state of mind of a person which affects the person’s thinking, perceiving, emotion or judgment and which seriously impairs the mental function of the person to the extent that he or she requires care or medical treatment in his or her own interest or in the interest of other persons’ (Mental Health Act 2001, Section 3(2)).

‘Mental disorder’ is ‘mental illness, severe dementia or significant intellectual disability where’ either ‘(a) because of the illness, disability or dementia, there is a serious likelihood of the person concerned causing immediate and serious harm to himself or herself or to other persons’ (the ‘risk criterion’) or ‘(b) (i) because of the severity of the illness, disability or dementia, the judgment of the person concerned is so impaired that failure to admit the person to an approved centre would be likely to lead to a serious deterioration in his or her condition or would prevent the administration of appropriate treatment that could be given only by such admission, and (ii) the reception, detention and treatment of the person concerned in an approved centre would be likely to benefit or alleviate the condition of that person to a material extent’ (the ‘treatment criterion’) (Section 3(1)).

A person cannot be involuntarily admitted ‘by reason only of the fact that the person (a) is suffering from a personality disorder, (b) is socially deviant, or (c) is addicted to drugs or intoxicants’ (Section 8(2)). The involuntary admission order lasts for 21 days but the consultant psychiatrist can ‘revoke’ the order earlier, as soon as the patient no longer fulfils the criteria. After an ‘admission order’ or ‘renewal order’ is completed, it is reviewed by a mental health tribunal within 21 days (if it has not already been revoked by the psychiatrist, in which case an elective tribunal can be scheduled if the patient so requests). Each tribunal comprises three members: a psychiatrist, a solicitor or barrister, and a layperson. If the tribunal is satisfied that appropriate procedure was followed and the patient still has ‘mental disorder’, the tribunal affirms the order. If the tribunal is not so satisfied, it revokes the order and directs that the patient be discharged, although the patient can remain as a voluntary patient if they wish.

Ireland’s rate of involuntary admission is relatively low, at 46.7 per 100,000 population per year4. The rate in England (120) is more than double the Irish rate5. Ireland’s low rate might be a reaction to the large asylums of Ireland’s past or, more speculatively, relate to the lack of media concern about public safety in Ireland compared to England, or, possibly, generally lower levels of care in Ireland.

Legal criteria significantly shape practice: there is evidence that use of risk or dangerousness as a mandatory criterion for involuntary admission may delay initial treatment of schizophrenia6; i.e. that in countries where both risk and clinical criteria are mandatory for involuntary care, treatment is delayed. This has been described as inherently discriminatory and an unreasonable barrier to care in severe illness7,8.

To compound matters, there is evidence that legal criteria for involuntary admission tend to be interpreted paternalistically9 and recorded poorly,10 possibly because such legal terminology can be inherently ambiguous11. These are important issues: US research indicates that measures of preadmission dangerousness, rather than disability or impairment, account for most of the variance in admission status12. Dutch data confirm that police referral is the strongest independent predictor of involuntary status13.

Despite these findings, remarkably little is known about the differences, if any, between risk-based and treatment-based involuntary admissions in terms of outcomes, such as length of stay. It is known that involuntary patients with suicidal ideation have a longer length of stay in emergency departments, compared to those not seen as being at risk of suicide14. One Finnish study found that length of stay for patients involuntarily admitted on the basis of being harmful to others were longer than that for other involuntary patients (69 days versus 46 days, p=0.003)15,16, but remarkably little has been written about this topic since then. As a result, it remains unclear what, if any, are the implications of the use of risk-based as opposed to treatment-based criteria for involuntary psychiatric admission17.

Results
There were 2,940 admissions to the three units during the periods studied, of which 423 (14.4%) were involuntary. Involuntary patients were more likely than voluntary patients to be male (62.2% versus 47.2%; Chi Square 32.321, p<0.001), unmarried (80.6% versus 69.5%; Chi Square 26.824, p<0.001) and have a diagnosis of schizophrenia or a related disorder (e.g. delusional disorder) (58.6% versus 20.1%; Chi Square 313.183, p<0.001). Schizophrenia was the most common diagnosis among involuntary patients (58.6%); the others were affective disorders (27.2%), neuroses (2.8%), organic mental disorders (1.2%) and others (10.1%). There was no significant difference between involuntary and voluntary patients in terms of unemployment (67.2%). There were no statistically significant differences in these findings across the three hospitals, with just minor fluctuations attributable to the lower power of analyses in individual hospitals (Table 1). 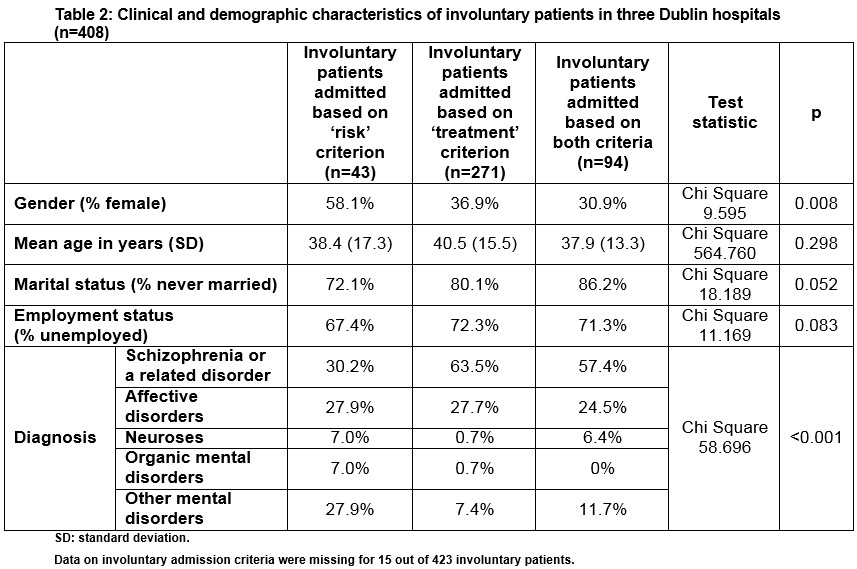 Involuntary admission based solely on the ‘risk’ criterion was associated with female gender and having a diagnosis other than schizophrenia (Table 2). There were no statistically significant differences in these findings across the three hospitals, with just minor fluctuations attributable to the lower power of analyses in individual hospitals (Table 3). 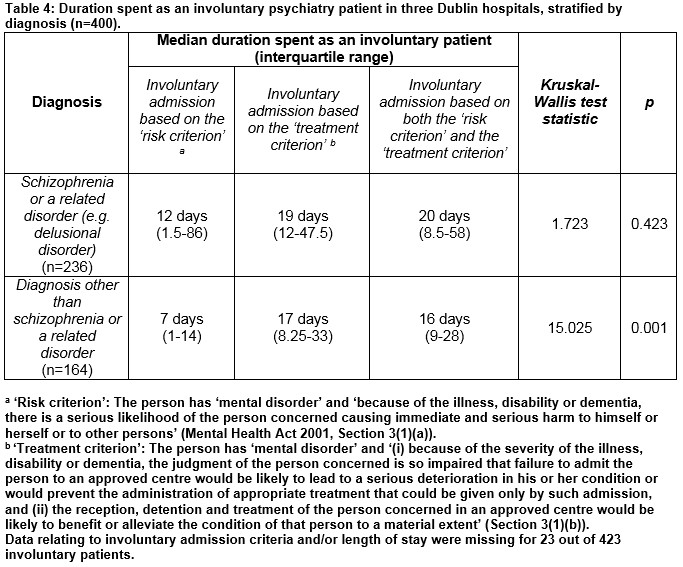 Limitations include the fact that the study relied upon the accuracy and quality of the data in patients’ files and related documentation. We studied only one diagnosis per patient although there may have been significant co-morbidity in some. Our study was conducted in three independently functioning hospitals, each with a different computer system and different ‘hard-copy’ records. As a result, not all variables of interest were collectable (e.g. country of origin, ethnicity, insight, deprivation). The role of clinical variables is especially difficult to study in a retrospective analysis such as this, as is the extent to which patients perceive coercion (even when care is ‘voluntary’). Prospective research is needed, with an emphasis on incorporating clinical variables and patients’ own experiences.

We also report the novel finding that involuntary admission based on the ‘risk criterion’ (rather than the ‘treatment criterion’ or both) is associated with a shorter period as an involuntary patient for patients with diagnoses other than schizophrenia and not for patients with schizophrenia. It is possible that patients with personality and adjustment disorders are detained under risk criteria but cannot be detained further once the acute risk subsides; this possibility merits further study.

It is also possible that some involuntary admissions in schizophrenia are initially based on risk but are continued on the basis of need for treatment. Nevertheless, if inpatient psychiatric services are intended primarily as treatment centres rather than risk management units, these findings raise an important issue about the basis of certain involuntary admissions, suggesting that the balance between considerations of risk and considerations of treatment requires careful re-examination in the setting of involuntary psychiatric care.

Acknowledgements: The authors are very grateful to the data collectors for this study and to the peer-reviewer for their comments and suggestions.

Declaration of interest:
None to declare.