Accurate preoperative knowledge of tumour stage is important in preoperative planning at radical prostatectomy (RP). The aim of this study was to assess the predictive ability of multiparametric MRI for detecting pathological outcomes.

A retrospective review was performed of all patients who underwent RP over a 4 year period.

MRI has good specificity but poor and heterogeneous sensitivity for predicting T3 disease in RP specimen.

Introduction
Prostate cancer (CaP) is the most common solid organ neoplasm in males1.There is lack of consensus regarding the optimal diagnostic, staging and treatment options for CaP. Several factors such as age, comorbidities, PSA, Gleason grade, tumour volume and local extension of the disease influence management2. Pathological stage T3 disease (American Joint Committee on Cancer (AJCC) Prostate cancer staging manual 7th edition) is classified as extra-capsular extension (ECE) and/or seminal vesicle invasion (SVI). Prediction of T3 disease by digital rectal examination and transrectal ultrasound (TRUS) is known to have low accuracy3,4. Accurate preoperative knowledge of tumour stage and ECE are important in preoperative planning to achieve the best surgical, oncological and functional results. ECE is important with regards to the decision making process when considering a nerve sparing approach and the extent of surgical margins5,6. Multiparametric magnetic resonance imaging (mpMRI) use is expanding as a diagnostic technique in CaP staging and ECE risk assessment7. Pathologists prepare the prostatectomy specimen as axial tumour maps which allow direct correlation with the pre-operative MRI 8.

Sensitivity and specificity of mpMRI for detecting ECE are widely variable and are influenced by magnetic field strength (1.5 Tesla vs 3 Tesla), the use of an endorectal coil and MRI parameters used9. Furthermore, inter-observer variation in MRI reporting can occur. To reduce this variation a more structured uniform reporting and scoring system (PIRADS) has been devised and implemented in many centres10.The aim of this study was to assess the predictive ability of pre-operative MRI for detecting pathological outcomes at radical prostatectomy (RP) in our unit.

Methods
A retrospective review was performed of all patients who underwent RP by a single fellowship trained Consultant Urologist in a tertiary referral hospital between April 2012 and January 2016. Demographic, clinical and pathological details on these patients were collected. A standard radical retropubic prostatectomy was performed via a 10cm lower midline incision. All patients underwent a staging MRI preoperatively- some of these were performed outside of the central institution. All cases were however reviewed centrally (CUH) pre- and post-operatively at the institutional MDM and imaging was reviewed by either of two fellowship trained radiologist with experience in standardised prostate MRI reporting (PIRADS 2).  All scans were performed on either 1.5T (GE Optima 1.5T 450w and Siemens 1.5T Magnetom, Siemens healthcare, Munich, Germany) or 3T MRI scanners (GE Discovery 750w 3.0T 70 cm bore, GE healthcare, Fairfield, Connecticut, US). The 3T MRI unit was installed during the study period and therefore scans performed early in the series were 1.5T while subsequent scans were performed at 1.5T or 3T.

At our unit, we routinely perform axial and coronal T2-weighted sequences, axial diffusion-weighted sequence (b-value 1000s/mm2), and axial T1-weighted sequence through the pelvis. We do not use an endorectal coil and a standard body coil is used at both 1.5T and 3T. We do not routinely perform dynamic contrast enhanced sequences or MR spectroscopy. Histopathological characteristics from the RP specimen were compared to radiological staging from the finalised imaging report and the outcome of the imaging review discussion at the multidisciplinary meeting (MDM).  All histological specimens were independently reviewed by at least two Consultant Histopathologists. Histology specimens were reported according to the American Joint Committee on Cancer (AJCC) Prostate cancer staging manual 7th edition.  Histopathologically, ECE is defined as a cancer that extends through the prostatic capsule into the periprostatic adipose tissue. ECE is further subdivided into focal ECE and established ECE. Focal ECE refers to the presence of no more than a few malignant cells immediately outside the capsule (i.e. within one or two step-sections). Established ECE refers to all other cases of ECE and includes more extensive presence of malignant cells outside the capsule11. 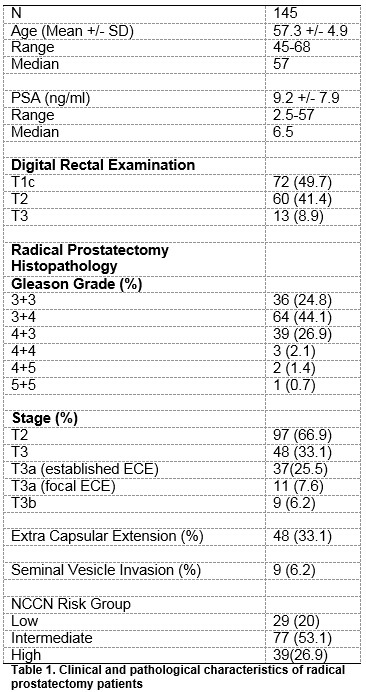 Discussion
Our study demonstrates a relatively low accuracy of MRI for predicting pathological outcomes at RP. At present in our institution, all patients with CaP undergo a staging MRI in advance of surgery. The presence of T3 disease is one of the key factors in the joint decision making process with the patient- therefore the accuracy of MRI is paramount.

Oon et al., in the only other published Irish series, demonstrated more favourable sensitivity (75%) and specificity (100%) for detecting pathological outcomes in a smaller surgical series. Interestingly- the majority of that study only had conventional MRI- without diffusion weighted imaging (DWI) or dynamic contrast enhancement (DCE)16, similar to our series. Contrary to our study, these MRI scans were performed prior to prostate biopsy. In the setting of a rising level of PSA and negative transrectal prostate biopsies, NiMhurchu et al, demonstrated significant correlation between DWI and targeted peripheral zone prostate lesions for detecting prostate cancer17.

The correlation between histopathological lesions and MRI findings is difficult to determine, especially due to the variations between MR cross -sections and prostatectomy slices, and the shrinkage of the surgical specimen during histopathological processing18. The suspicion of ECE at MRI is made by direct and indirect signs, such as the presence of solid tissue in the periprostatic fat, irregular bulging of the prostatic capsule and obliteration of the retroprostatic angle, as well as non-specific signs such as capsular thickening, capsular retraction and regular bulging of the capsule19.

There is well documented inter-observer variability regarding the interpretation and reporting of MRI therefore standardised reporting protocols by dedicated uro-radiologists are useful.  The uptake of MRI as a diagnositic tool has previously been slow due to lack of standardised reporting of results20. To standardize the evaluation and reporting of prostate MRI, the European Society of Urogenital Radiology (ESUR) published guidelines based on an expert consensus in 2012, termed the Prostate Imaging Reporting and Data System (PIRADS). This guideline provides explicit and standardised criteria for Likert-scoring of multiparametric sequences (T2w, diffusion-weighted imaging (DWI), dynamic contrast enhanced imaging (DCE) and MR-spectroscopy)10. The accuracy of mpMRI and PIRADS scoring has not only been established for biopsy specimen, but also for histopathologic correlation using prostatectomy specimen. Prior to the PIRADS era, Isebaert et al. found a sensitivity of 58.5% for CaP detection21, which may account for the poor sensitivity rates seen in our cohort. Recent publications demonstrate detection rates of significant CaP between 80-96% for MRI compared to whole-mount sections22,23.

Somford et al. found a NPV of 87.7% for ECE in patients with low-risk CaP and a PPV for ECE in high-risk patients of 88.8%6. Marcus et al. investigated the impact of preoperative MRI on NCCN risk group classification in a cohort of 71 patients and found that 16.9% of patients were upstaged by MRI, mostly from intermediate- to high-risk24. McClure et al. found a change in the initial surgical plan in 27% of patients, analyzing a cohort of 104 consecutive men. In their study of a series of laparoscopic RP, the surgical plan was changed to a nerve-sparing technique in 61% and to a non-nerve-sparing in 39%5.

The Royal College of Radiologists UK offers some suggestions to improve the accuracy for preoperative MRI- the use of an endorectal coil, increased interval between TRUS biopsy and MRI, repeating MRI if significant artefact or post biopsy haemorrhage and limiting prostate MRI reporting to dedicated uro-radiologists10.

Our study is limited its retrospective analysis of a small surgical series performed by a single surgeon. These results may not be representative of the whole population as many patients who had prostate MRI were managed with active surveillance or radiotherapy and these were not included as we would not be able to correlate with final histology. The pathological outcomes (ECE and SVI) were only present in a small number of patients which may impact the analysis. All MRI scans were not performed in the same institution and the use of the 3T machine was not available until late in the series. Given the unit is a tertiary referral centre some patients had scans performed peripherally at outside institutions with slight differences in acquisition protocols and sequences. All pre-operative imaging was however reviewed at the MDM in the cancer centre by one of two radiologists with training in prostate MRI interpretation. Over the time period of this study, the PIRADS standardised scoring system was not routinely applied when reporting prostate MRI.

The results of our retrospective cohort study show a relatively a relatively low accuracy of mpMRI for predicting T3 disease in the RP specimen. The predictive ability of mp-MRI was lower in patients with low risk disease, while accuracy improved in high risk patients. The use of higher magnetic field strength MRI at 3T, use of endorectal coil, and specialist interpretation/ reporting (PIRADS 2) may all contribute to increasing the accuracy of preoperative staging of prostate cancer, and future prospective studies should focus on these areas.

There are no conflicts of interest to report.