Laryngeal cancers are rare, encompassing around one percent of all cancers. Suspicion should be raised if a patient presents with classical signs and symptoms; i.e. dysphonia, inspiratory stridor, dysphagia, odynophagia, neck mass, or persistent cough. Laryngeal chondrosarcoma is a rare form of laryngeal cancer, the diagnosis of which can be difficult. The case in question describes an unusual presentation of one such case, and its subsequent investigation, management and outcome.

Case Study
An 82-year-old male, with a background of COPD, presented to the emergency department complaining of progressive dyspnea and dysphonia. On initial evaluation it became rapidly apparent that he was in significant respiratory distress, with audible stridor. Flexible nasendoscopy confirmed upper airway obstruction with a large submucosal mass obstructing the laryngeal inlet. An emergency tracheotomy was performed in order to secure the airway.

CT scan and core biopsy of the mass were performed, after which he was transferred to a tertiary unit for further investigation and management. Imaging (CT & MR) demonstrated a large mass, measuring 7.5 x 6.6 x 4.0cm, centered on the cricoid cartilage, with extensive cartilaginous destruction, without evidence of cervical lymphadenopathy. 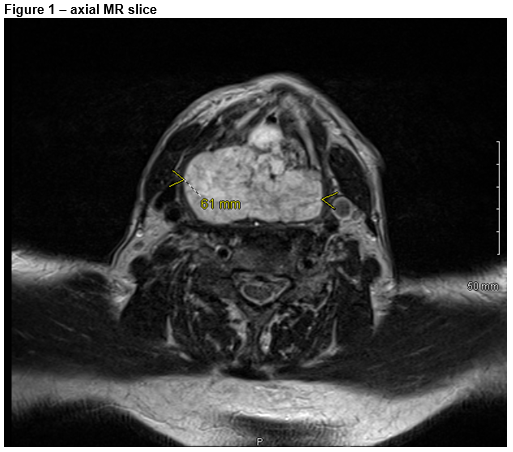 Histological scrutiny of the biopsy demonstrated a hypercellular cartilaginous tumour, with mild to moderate pleomorphism. Closer inspection demonstrated mitotic cells, with a frequency of approximately one per 10 high power fields. Despite these features a formal histologic diagnosis couldn’t be reached, based on limited size of the biopsy specimen. Repeat biopsy demonstrated similar features however a diagnosis remained elusive. The case was discussed at the local head and neck oncology MDT. Based on imaging and histology, total laryngectomy was recommended. (Figure 2 – laryngectomy specimen) 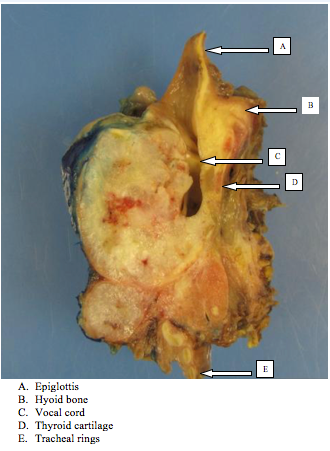 The patient elected to proceed and had an uneventful post-operative course. Following speech rehabilitation with a speaking valve he was discharged. He had follow up at 6 weeks and 6 months, and was doing well. He will continue to be followed up yearly for at least 5 years.Final histology confirmed the diagnosis of a grade 1 chondrosarcoma with evidence of some areas of transition to grade 2.

Discussion
Laryngeal cancer is relatively uncommon, encompassing around 1% of all cancers. Of these, squamous cell carcinoma accounts for the majority, with a high male:female perponderance (5:1)1. Chondrosarcoma accounts for around one percent2. It usually presents with classic signs and symptoms of a laryngeal tumour; ie dysphonia, inspiratory stridor, dysphagia, odynophagia, neck mass, or persistent cough3. It is usually a slow growing tumour and therefore rarely presents with acute airway obstruction. It is most commonly centred on the cricoid cartilage (70 – 75%), however it can also arise from the thyroid cartilage, epiglottis and arytenoids in descending order of incidence4.

Symptoms depend on the location. Subglottic and endolaryngeal tumours will generally cause dyspnoea. Extralaryngeal tumours may compress the oesophagus resulting in dysphagia5. In our case the patient presented with inspiratory stridor and mild dysphonia, due to its location originating outside of the larynx, ultimately resulting in laryngeal obstruction due to its sheer size. Diagnosis of laryngeal chondrosacoma can be difficult due its rarity, and that it can be troublesome to differentiate from a benign chondroma2. To diagnose a well differentiated chondrosarcoma, the presence of binucleated chondrocytes is required. Most studies cite this definition to make the distinction between well-differentiated chondrosarcoma and chondroma6. Once a diagnosis of chondrosarcoma has been made, it is further subcharacterized into grade 1, 2 or 3, based on the criteria below, summed up by Lichtenstein and Jaffe:

Laryngeal chondrosarcoma has favourable prognosis compared to other laryngeal cancers, largely due metastases being rare. Despite this these tumours can often be locally aggressive, resulting in local invasion and, as it did in our case, causing airway compromise2,3,8. Given that distant metastases are so rare, adjuvant chemotherapy is rarely considered3,7. Radiotherapy is also considered to be of limited benefit in laryngeal chondrosarcoma, as it is poorly radiosensistive. There are however some conflicting reports regarding its adjuvant use in cases with residual disease after surgery9,10.

In conclusion, laryngeal chondrosarcoma is a rare form of laryngeal cancer. Its diagnosis is aided by appropriate imaging and close scrutiny of histological samples, ideally by experienced pathologists with an expertise in head and neck malignancy and/or soft tissue masses. Radical surgery is usually necessary but prognosis is generally favourable compared to other laryngeal cancers.

Conflict of Interest
The authors confirm no conflict of interest