Abstract
We present a case of a 23 month-old boy presenting with fever, irritability and diarrhea who subsequently developed symptoms of photophobia and lethargy. Cerebrospinal fluid culture grew Listeria monocytogenes. Immunology investigations were normal. This patient had a complete and uncomplicated recovery. Listeria meningitis is a rare presentation in immunocompetent children, but should be considered in the setting of diarrhea, failure to respond to cephalosporin therapy, or suspected immunodeficiency.

Background
Listeria monocytogenes is a facultatively anaerobic Gram-positive bacillus that is an unusual cause of illness among immunocompetent individuals1. Infection with listeria is most commonly encountered in pregnancy, the neonatal period, and in immunocompromised patients2. Risk factors include food-borne exposures, particularly to soft cheeses and delicatessen meats, and life stock exposure3. Meningitis is the most frequently encountered clinical syndrome. L. monocytogenes  accounts for 20% of cases of meningitis in neonates and in those >60 years and is the most common cause of meningitis among immunocompromised individuals1. Listeriosis is a rare disease in Ireland with a crude incidence rate of 0.41 per 100,000 which is lower than the EU average of 0.48 per 100,000 4.

Case Report
We describe the case of a 23 month-old male presenting with pyrexia, irritability and diarrhea for 48 hours. His examination revealed erythema of his pharynx and tonsils but was otherwise normal. There was no significant past medical or family history and no relevant sick contacts. He lived in an urban setting and did not consume unpasteurized dairy products. Immunisations were up to date. Investigations revealed a leukocyte count of 16.7 x 109/L (neutrophils 10.7 x 109/L, lymphocytes 3.84 x 109/L), and a c-reactive protein of 54.4 mg/L. He was admitted for observation with a working diagnosis of gastroenteritis.

At 36 hours the CSF culture was positive for L. monocytogenes Subtype 4b, sensitive to penicillin and vancomycin, resistant to ceftriaxone and with a high-level gentamicin MIC. Blood cultures were negative. The patient’s antibiotics were rationalized to amoxicillin and gentamicin. His lethargy and photophobia improved however he began to have further pyrexia and diarrhea on day 8 of admission. A repeat CSF culture at this time was again positive for L. monocytogenes.  Given persistent positivity of CSF cultures despite 6 days IV amoxicillin, IV Vancomycin was added to his treatment and his symptoms improved over the following 5 days. A repeat CSF culture on day 20 was negative. Magnetic resonance imaging (MRI) Brain was normal. He completed a 21-day course of Amoxicillin and 14-day course of Vancomycin. Immunology investigations including serum immunoglobulins, detailed lymphocyte immunophenotyping, serotype specific vaccine responses and HIV serology was normal. Outpatient audiology follow up was normal and he is meeting age-appropriate developmental milestones at 2-year follow up.

Discussion
A systematic review of the literature (Table 1) revealed 15 case reports describing 18 cases of listeria meningitis in immunocompetent children from 1982 to 2017. A summary of the clinical features is presented in Table 2. 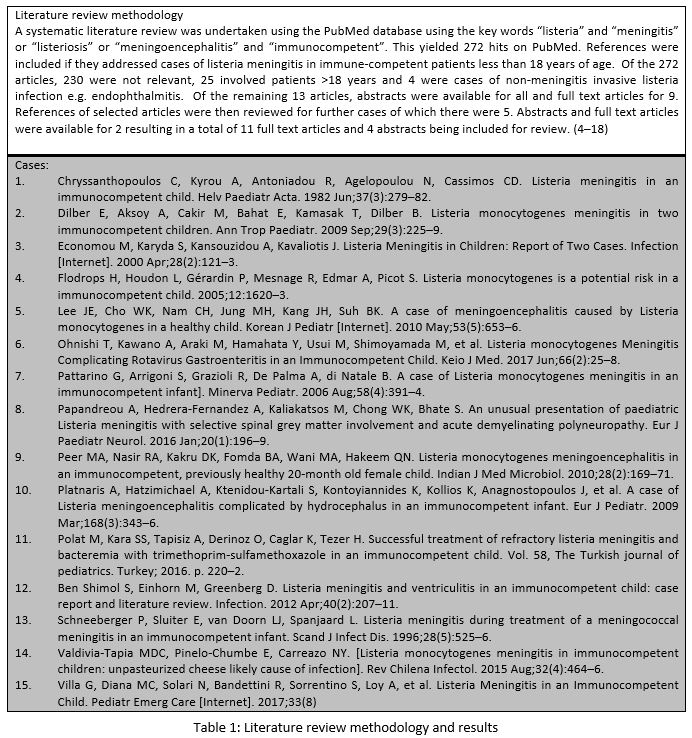 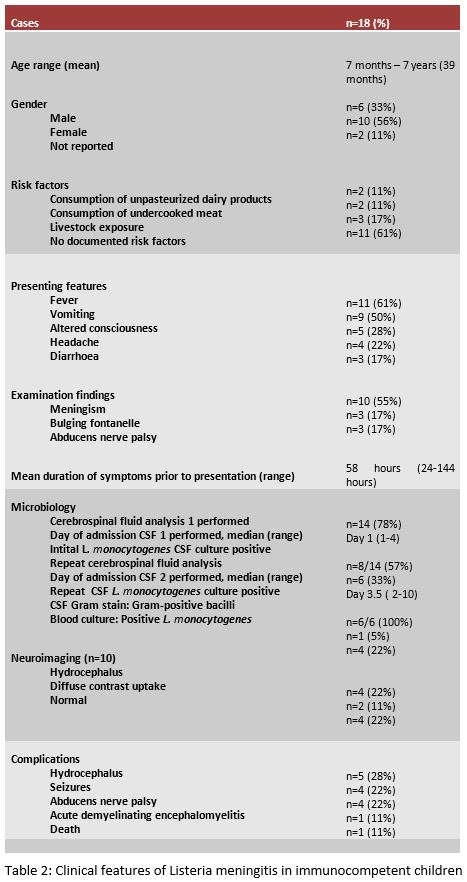 The most common presenting features are fever, vomiting, altered consciousness, headache and diarrhoea. Cerebrospinal fluid analysis results were available for 14 of 18 cases. Initial CSF culture was positive in eight cases and repeat CSF culture was positive in the remaining six patients. Of the twenty lumbar punctures performed, Gram stain demonstrated Gram-positive bacilli in only one sample. Complications were reported in ten including hydrocephalus, seizures, and abducens nerve palsy. A risk factor was identified in seven (38%) cases. There was one reported death.

Our case is unusual, since physical signs of meningitis were not present on admission but emerged later. Furthermore, while our patient had a complete recovery, neurological complications are common.(18) This, and other cases, highlight that gastrointestinal symptoms are common in cases of listeria meningitis. It should be considered in a child with meningitis who is not responding or is deteriorating on first line therapy (cephalosporin based). Diagnosis may be difficult and delayed due to the low yield of Gram stain on CSF and low clinical suspicion. Additionally, initial CSF culture may be negative 6. Listeria meningitis is seen in immunocompromised patients, and a diagnosis of listeria meningitis beyond the neonatal period should prompt an immunology assessment.

To conclude, in cases of community acquired meningitis not responding to cephalosporin-based first line treatment L.monocytogenes should be considered, even in apparently immunocompetent patients, particularly if diarrhea and vomiting are also present.

Funding Statement
No funding was received.