It is estimated that, in Ireland, there are 10,000 women with epilepsy of childbearing potential1. In this paper the maternal mortality rate for women with epilepsy attending the Rotunda Hospital Epilepsy Clinic 2004 - 2013 was determined. There were 3 maternal deaths in women with epilepsy during this time, which represents a mortality rate of 0.8%. In those women who died, there were concerns in relation to risks to the foetus by taking Anti-Epileptic Drugs (AED) and also issues with access to neurology services before pregnancy, acceptance of specialist support and lack of consistency in advice from health care professionals outside of Ireland.  Implementing the nationally agreed care plan for women with epilepsy will improve the quality of care given and potentially we will see a reduction in maternal mortality in these women.

Epilepsy is the commonest serious neurological disease. It is estimated that, in Ireland, 37,000 people over the age of 5 years are affected and that 10,000 of these are women of childbearing potential1 which suggests there are between 250 and 300 affected pregnancies each year in Ireland2. Increasingly the particular issues and potential complications for a pregnant woman with epilepsy are being recognised3. An increase in seizure frequency or return of seizures in pregnancy is well recognised and has a multifactorial basis - including high levels of oestrogen, dilution and bioavailability of drug, compliance with prescribed AED, sleep deprivation4. Diminution of control of epilepsy in non-pregnant women and men is associated with increased mortality5 and the reduced control of seizures in pregnancy is likely to be a key factor in increased maternal mortality seen in women with epilepsy6.The maternal mortality rate for women with epilepsy attending Rotunda Hospital Epilepsy Clinic 2004 - 2013 was determined and associated risk factors in the index cases identified to assist the optimisation of management of these patients.

All women attending for antenatal care at Rotunda Hospital with current or past history of epilepsy, on or off treatment are referred to the combined Obstetric and Epilepsy Clinic. At earliest opportunity, women currently on treatment or on treatment in previous 5 years are reviewed by Special Interest Consultant and with Epilepsy Clinical Nurse Specialist since 2008. Patients not on treatment are referred to their local Rapid Access Seizure Clinic if any recurrence of symptoms. Access to the (Epilepsy) Electronic Patient Record has been provided since 2013 and the record is updated at each combined visit. A review of clinic activity and outcomes is published each year in the Clinical Report of Rotunda Hospital. The following information relating to patients attending the Epilepsy Clinic in Rotunda Hospital was extracted from this annual clinic review for the first 10 years of the clinic - 1/1/2004 to 31/12/2013 - number of patients seen, number of patients on AED, maternal mortality outcome and case histories and post mortem information of the maternal deaths.

Poisson distribution was used to determine the 95% Confidence Intervals (CI) relating to the maternity mortality rate in the cohort of patients who attended Rotunda Epilepsy Clinic in comparison to rate determined in Confidential Enquiries into Maternal Deaths 2009 - 20123.

Case 1 (2004) This Irish 24 year old primigravida had well controlled epilepsy on Sodium Valproate. She was employed, a non-smoker with normal BMI. She was under the care of Irish neurology services and had appropriately attended Rotunda Epilepsy Clinic. In late mid trimester, she was found unconscious. Emergency services attended promptly. Resuscitation was unsuccessful. She was alone for 5 - 10 minutes prior to this occurrence. There was no evidence of seizure. The post mortem conclusion was of Sudden Unexplained Death in Epilepsy (SUDEP). While AED levels were not checked, this patient had previously been known to be carefully compliant with her medication.

Case 2 (2008) This 28 year old English speaking European primigravida had been prescribed Lamotrigine to control her epilepsy. She was unemployed, a non-smoker with normal BMI. The patient had not had a review by Irish neurology services. She did not attend for appointments to the Rotunda Epilepsy Clinic at 14 and 17 weeks. She attended for ultrasound at 19 weeks and encouraged to attend for specialist support. She lived alone and was found dead at 23 weeks. There was some evidence that a seizure had occurred. Measurement of AED levels post mortem was not undertaken. The post mortem conclusion was of SUDEP.

Case 3 (2011) This non - European, non - English speaking primiparous patient had been prescribed Lamotrigine to control her epilepsy. She was unemployed, a non-smoker with normal BMI. The patient had not had a review by Irish neurology services but had 2 attendances at the Rotunda Epilepsy Clinic. She considered epilepsy to carry a stigma and that medication was dangerous in pregnancy. She agreed to recommence treatment at 22 weeks. Shortly after this she was found dead at home. There was evidence that a seizure had occurred. The prescription for Lamotrigine had not been filled. The post mortem conclusion was of SUDEP 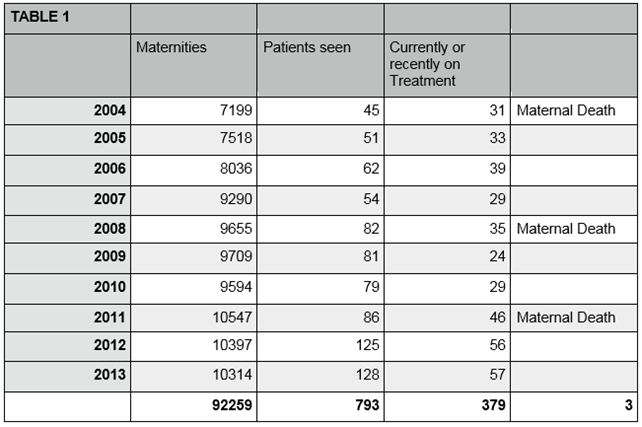 The prevalence of epilepsy in pregnancy is estimated to be 3 per 1,000 pregnancies2. The prevalence is higher in our review which is probably related to a high referral rate from neurology services to the clinic. There were 3 maternal deaths in women with epilepsy currently or recently on treatment during this 10 year review period. This represents a mortality rate of 0.8% for this cohort of women. The recent report on Confidential Enquiries into Maternal Deaths 2009 - 20123 has highlighted the importance of epilepsy as a contributor to maternal mortality with a rate of 0.40 per 100,000 maternities which is in contrast with the even higher maternal mortality rate we describe of 2.77 per 100,000 maternities (95% CI 0.62 - 8.77). The risk in the post-natal period is also highlighted in this Enquiry. We do not have knowledge of a postpartum death in our cohort of patients and since 2009, if such a loss was a possibility, review is undertaken by National Perinatal Epidemiology Centre.

Recent enquiries into maternal deaths have highlighted the management of epilepsy as an area which could be improved7 with access to pre-pregnancy counselling, clinical nurse specialists in epilepsy, promotion of compliance with medication, dedicated obstetric care and monitoring of drug levels recommended4. Enabled by the Clinical Care Programme since 2012, women linked to adult neurology services have an annual review as minimum by clinical nurse specialists and advanced nurse practitioners8. They are afforded pre-pregnancy counselling within neurology care and the other recommendations are all available to patients attending Rotunda Epilepsy Clinic in addition to first aid advice for relatives (administration of Buccal Midazolam) and lifestyle advice for the patient both during pregnancy and in the post-natal period.

Despite this, we had an unfortunate incidence of maternal death in our cohort of patients. This high risk of maternal death is often not realised by obstetricians and midwives. In those women who died, there were concerns in relation to risks to the foetus by taking any AED and also issues in relation to language, access especially to neurology services before pregnancy, acceptance of specialist support in pregnancy and lack of consistency in advice and treatment from health care professionals outside of Ireland.

All patients in Ireland with epilepsy should be linked to neurology services and access to care is no longer a barrier to specialist input. A nationally standardised care plan for women with epilepsy with identified roles for all stakeholders has been developed by Clinical Care Programmes in Epilepsy and Obstetrics and Gynaecology. While the recommendations of this care plan, including monitoring of AED level in each trimester, are now in place at Rotunda Hospital and potentially we will soon begin to see a reduction in maternal mortality in these women, publication remains awaited and national implementation is still far from complete. The Royal College of Obstetricians and Gynaecologists recently published Epilepsy in Pregnancy Guideline9 further highlighting the urgency of implementing standardised care for the pregnant woman with epilepsy.