The Sahel is a vast region of semi-arid desert stretching across the south central latitudes of Northern Africa between the Atlantic Ocean and the Red Sea. It is home to some of the world’s most underdeveloped countries and to Africa’s notorious “Meningitis Belt’. While Neisseria Meningitidis (often referred to as meningococcus) is found worldwide, it is in this belt, which borders the southern Sahara desert that the highest incidence of Meningococcal disease, specifically group A meningococcus, was found. During periodic epidemics, occurring mostly during the dry season between December and June, rates of infection reached up to 1000 cases per 100,000 of the population per year. This is in contrast to Australia, Europe or the United States where rates of infection typically rate between 0.3 to three cases per 100,000 per year[i]. The nineteen-nineties was a particularly bleak decade in the meningitis belt with thousands dying from the disease each year during that period. The picture today, however, could not look more different. As a result of one of the greatest public health initiatives of modern times, meningitis has been virtually eliminated in west, central and east Africa. Along with improved disease surveillance, the introduction of the MenAfriVac vaccine, a collaborative effort between the WHO, African governments, various NGO’s and Private Foundations, has slashed rates of infection to negligible levels since its introduction in 2010[1]. Few vaccines have been so successful in such a short space of time

The scourge of meningitis
Meningitides was first identified as the causative agent of bacterial meningitis in 1887 and was subsequently reported from the west coast of Africa in 1909[2]. While the instance of Group A meningococcus has declined significantly in the developed world, since the end of the Second World War, in Africa it remained endemic. The scale of the problem has been devastating and well documented. During the periodic epidemics that have occurred since the nineteen-fifties, millions of cases of Group A meningococcus have been reported (table 1) and tens of thousands have died. 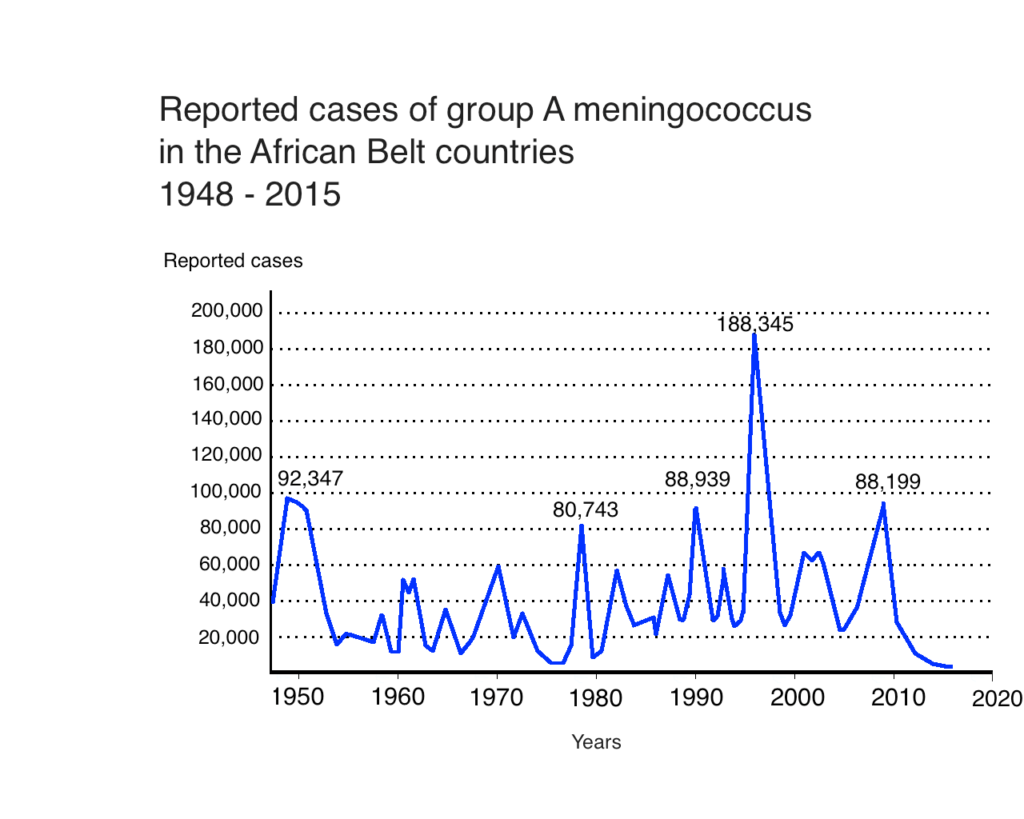 Management of Epidemics
Meningococcal A vaccines, based on capsular polysaccharide antigens, are currently available and have been used in Africa for in excess of twenty years to control meningitis epidemics. These polysaccharide vaccines were used to immunize communities once a meningitis epidemic had been detected (a policy encouraged by the WHO at the time) and while they were able to prevent meningitis they had several shortcomings, which undermined their effectiveness. The vaccine was not suitable for infants, vaccinated individuals were usually only protected for two to three years, it did not decrease carriage of the bacteria nor did it induce herd immunity. Because of these difficulties, polysaccharide vaccines were not considered optimal products for routine vaccination programs[3].

Thought not necessarily the fault of the vaccine, poor disease surveillance further undercut its effectiveness. Delays in identifying meningitis outbreaks often meant that meningococcal polysaccharide vaccines were given once the epidemic was over[4]. These problems were particularly evident during the 1996 – 1997 outbreak in the meningitis belt where the results of a reactive vaccination campaign was judged to have yielded only a marginal public health benefit. In one region a vaccination campaign, using polysaccharide vaccines, led to a modest twenty three percent reduction in cases and an eighteen percent reduction in deaths[5].

While, on an individual level, every life saved is to be celebrated, overall, the costs associated with the meningococcal polysaccharide vaccine outweighed its benefits. Sub-Saharan countries and their donors were spending tens of millions of dollars to purchase and distribute a vaccine, which did not provide herd immunity and was thus unable to eliminate the epidemic. The particularly severe epidemics of the mid-nineties put matters into sharp focus. African countries, and their donors could continue to fund repeated reactive campaigns of relatively limited effectiveness or work with the international community to find an alternative vaccine.

The Development and Success of MenAfriVac
After the devastating meningitis epidemic of 1996 African countries, within the belt, committed to working with the WHO to develop a new vaccine. The subsequent partnership between the WHO and PATH, a Seattle based nonprofit organization, was able to develop a low cost conjugate A vaccine, MenAfriVac, priced at $0.40 per dose (one of the major stipulations for project success). After successful trials in India and subsequently in Gambia, Senegal and Mali, targeted mass vaccinations of MenAfriVac began, across the Meningitis belt, in 2010[6]. The results of this vaccination campaign have been very impressive. Since the introduction of MenAfriVac over a quarter of a billion people in the meningitis belt have been vaccinated, and in those places, instance of group A meningococcus has dwindled[7]. According to the WHO’s own reporting a mere 80 cases of group A meningitis were reported across the region in 2015[8]. This is particularly remarkable considering, five years before, the WHO reported nearly 25,000 suspected cases of meningitis during the 2009 – 2010 West African meningitis outbreak[9]. Further, It has been estimated that, in the first four years since the introduction of the vaccine, more than a million cases of meningitis have been prevented and 142,000 lives have been saved[10].

The challenges ahead
With the success of the MenAfriVac the challenge now faced by policymakers is to move from the targeted mass vaccination campaigns of the last half-decade towards the full integration of the vaccine into the national immunization programs of the twenty six African countries of the belt. Sudan has become the first country in the belt to do so with over 720,000 children under the age of one being vaccinated in 2016[11]. More are set to follow in 2017.

While the introduction of MenAfriVac has induced excellent short-term disease control, a recent study has predicted a strong resurgence in meningitis, in the next 15 years, if routine immunization is not introduced across the region[12]. Even if MenAfriVac is introduced into routine immunization schedules, history has shown that achieving high vaccination coverage rates, in Sub-Saharan Africa, has proven challenging. In many parts of the region, uptake of long standing vaccines such as the polio vaccine and the BCG are significantly below eighty percent[13]. As a consequence the number of reported cases of vaccine preventable diseases, in the meningitis belt, remain among the highest in the world[14]. Thankfully matters are improving. Vaccination coverage has been rising steadily across the region for the past two decades and It is hoped that uptake of MenAfriVac will reflect this trend.

There can be no doubt that MenAfriVac has been instrumental in drastically reducing the incidence of Group A meningococcus across Sub-Saharan Africa – yet this monumental achievement cannot be attributed to the vaccine alone. Since 2003, the disease surveillance network across the belt has significantly improved, allowing for timely outbreak evaluation and response; factors that were critical to MenAfriVac’s remarkable success. While the familiar difficulties persist – namely political instability, widespread corruption and chronic underinvestment – it is strongly hoped that improved disease surveillance infrastructure, along with the lessons learned from the meningitis vaccine project, will leave belt countries better placed to meet the challenges posed by emerging diseases such as Group C meningococcus which is currently on the rise across West Africa

2. Centre for Global Development. Beginning of the end, eliminating meningitis across Africa’s meningitis belt. Available from http://millionssaved.cgdev.org/case-studies/eliminating-meningitis-across-africas-meningitis-belt (accessed 12 May 2017)