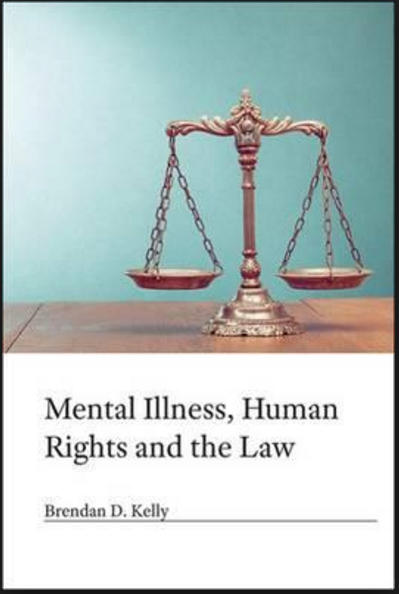 Brendan Kelly is Professor of Psychiatry at Trinity College Dublin and Consultant Psychiatrist in Tallaght Hospital, Dublin. He is passionate about the human rights of those with mental illness and has an encyclopaedic knowledge of the minutiae of these rights as enunciated in Mental Health Legislation in the islands of Great Britain and Ireland. His in-depth understanding of these interlocking areas shines through in this book.

The forward is written by one of Britain’s most eminent psychiatrists, Emeritus Professor of Psychiatry at the University of Oxford, Tom Burns. The package in its entirety including the substance of this work, the forward, the layout and design and the additional information (case law and various international documents) make for a work of exceptional quality. It will undoubtedly be the primary source for information on Mental Health Law and Human Rights in these islands.

There is a logical flow to the text. It begins with a discussion of the definition of human Rights, followed by a history of the evolution of philosophical thinking in respect of these, beginning with the Persian Empire in 6BC. The Enlightenment, the work of Thomas Paine (1776), the US Declaration of Independence (1776) and the French Declaration of the Rights of Man and the Citizen (1789) as well as the concept of ‘natural’ rights are all discussed. These provide a solid backdrop to our appreciation of the late emergence of a recognition that those with mental illness were at risk of their rights being trampled upon, with often interminable detentions in unsuitable Asylums across Europe. It was not until well into the 20th Century that specific laws were enacted across Europe to protect those with mental illness from abuse. These had their roots in the Universal Declaration of Human Rights (1948) and culminated in the United Nations Convention of the Rights of Persons with Disabilities (2006). A critical discussion then explores the Mental Health Legislation of the jurisdictions in these islands and the extent to which they protect Human Rights. If there is a gap in their otherwise magnificent work, it is the absence of discussion on the “autonomy” versus “best interests” debate in respect of mental health legislation.

Moving from the purely legal aspects of Human Rights, Kelly concludes by discussing factors extraneous to the law that impact upon rights. These are rooted in the political, social and economic policies of the various countries, which he refers to as “structural violence”. This powerful section is a cri de coeur for advocacy and activism so that services can be adequately resourced. Only then, he points out, will the Human Right and dignity of those with mental illness be truly protected.