A 31-year-old female was diagnosed with small cell carcinoma of the ovary hypercalcaemic type (OSCCHT) post left oophorectomy. This is a rare aggressive ovarian tumour of which less than 300 cases were reported.

A 31-year-old nulliparous female was referred by GP with lower abdominal pain for 3 weeks. Pain was aggravated by passing urine and defecation. Her medical history was insignificant except for irregular periods for the last 2 months. She had ultrasound scan (USS) report, which showed a 6.8cm cystic tumour found in the left ovary.

Gynaecological examination revealed a large tender pelvic mass in the pouch of Douglas (POD) palpable at the upper anterior wall of the vagina. USS was repeated and confirmed a large mass with solid and cystic areas in POD between the rectum and the uterus .The solid part measured (6.08x5.32x6.1cm), and the cystic part (2.87x2.18x6.1cm). Ovaries could not be visualized. The mass origin could not be confirmed. Tumour markers were normal. Liver, renal, coagulation profile and blood counts were normal. Serum calcium was not measured. A CT scan confirmed USS findings. It showed the mass arising from the left adnexa and displacing the uterus. Left ovary was not identified. There was a trace amount of free fluid in POD. The right ovary appeared normal.

Patient declined exploratory laparoscopy. She was booked for the procedure in a month time. During laparoscopy, view was difficult and laparotomy was performed. The uterus and right ovary appeared normal. There was haemoperitoneum and a left adnexal mass was ruptured, left oophorectomy was performed with removal of all the piece meals of the mass from the abdominal cavity (Fig1). Abdominal toilet was done. All samples were sent for urgent histology. The histology diagnosis was “small cell carcinoma of the ovary, Hypercalcaemic type”. Patient was referred to gynaecological oncologist where she received chemotherapy. 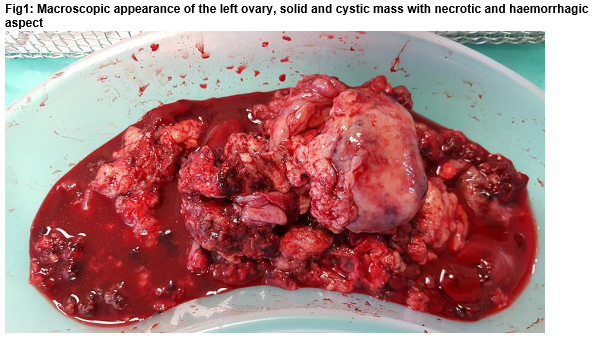 OSCCHT is a rare, highly aggressive lethal tumour1, 2. It was first described by Dickersin et al in 19821,3. Fifty to seventy-five percent of patients usually die within 1-2 years. Overall 5-year survival is approximately 10%2,3. Callegaro-Filho D et al1, 4 mentioned that less than 300 cases have been reported in the literature. The largest case series was 150 cases described by Young et al9.

It occurs in young women1,5. Median age at diagnosis is 30 years (range 5-46)2,4,6. At time of diagnosis our case was 31years old. OSCCHT may clinically present as asymptomatic unilateral adnexal masses with no preference to either side1. Common symptoms are lower abdominal and/or pelvic pain, enlargement of the abdomen, weight loss, nausea, vomiting, and anorexia, heamoperitonitis, and urinary frequency. Only 2.5% present with polyuria and polydipsia secondary to hypercalcemia3,6. In this case, the patient presented with three-week lower abdominal pain and left adnexal mass. The serum calcium was not measured preoperatively, as the rare diagnosis was not expected. However, calcium levels were normal after the surgery. Serum calcium levels decline to normal after resection of the tumour. It increases with recurrence.

The levels may serve as a marker for treatment response and recurrences. The pathophysiology of hypercalcemia is unclear. It has been postulated that parathyroid hormone or parathyroid hormone-related protein (PTHrp) or a tumor-induced calcium release by non tumour-related tissues may play a vital role3. The tumour size is generally large, an average size of 15cm, range from (6-26cm)2,3,6. Macroscopically, have a nodular or lobulated appearance with mostly solid or partially cystic sections accompanied by visible hemorrhage and necrosis2. Pathological examination remains the definitive standard for diagnosis of OSCCHT2.

OSCCHT is an aggressive disease and most patients develop progressive or recurrent disease despite treatment. There are multimodality treatments including surgery, chemotherapy and radiotherapy7. The patient had left oophorectomy followed by chemotherapy. Prognostic factors of the disease depends on the age of the patient >30years old, normal preoperative calcium level, a tumour size <10 cm, the absence of large cells, surgical resection including bilateral oophorectomy and post-operative radiotherapy for some cases3,6. Approximately 30% of patients staged IA had a long term recurrence-free survival compared to 10% of cases staged IC and 6.5% of women in advanced stage, respectively2,6. In our case as she was young and diagnosis was not expected she had left oophorectomy.