In recent years there has been increased utilisation of computed tomography (CT) imaging in developed countries, however there is a paucity of data regarding the utilisation of CT in the emergency overnight setting. We retrospectively analysed trends in ‘overnight’ (midnight to 8am) CT utilisation over a ten-year period at a single Irish tertiary referral hospital. Over the study period, we observed a significant increase in the proportion of CT imaging that was carried out overnight. There was no significant variation in the yield of pathological findings over the study period, which remained low (64% of CT studies were normal or had non-critical findings). The multiple factors which have contributed to the increased utilization of overnight emergency CT in recent years, the potential for reporting errors overnight and the implications therein for patient safety warrant consideration.

Introduction
The last two decades have witnessed an increase in the utilisation of Computed tomography (CT) imaging in the developed world1. This has been attributed to multiple factors; a greater availability of CT2, an ageing population3 and the increased complexity of modern medicine with an expansion of the clinical indications for CT4. CT plays an important role in emergency medical care, however concerns exist regarding the risk of fatigue-related error in CT reporting overnight and there is an observed association between increased overnight caseload and error rate5.

Methods
All CT studies performed ‘overnight’ (i.e. between midnight and 8am) during the month of March each year from 2007-2016 were identified using the hospital’s Radiology Information System (RIS) and retrospectively reviewed. Our institution is a tertiary referral hospital which has an emergency department (ED) with annual attendance circa 52,000. The overnight emergency CT cover in our institution is provided by an off-site radiology registrar and a consultant radiologist. The CT protocol and findings were recorded and classified independently by three of the authors (JH, CR and GH) using a system based upon Royal College of Radiologists’ standards for the communication of findings7 - critical (e.g. ruptured abdominal aortic aneurysm), clinically significant/urgent (e.g. appendicitis) or normal/non-critical (e.g. pulmonary nodule). A group consensus was taken when discrepancies in the classifications existed. In order to compare overnight CT activity to overall departmental and hospital workload, the total number of CT examinations performed on each day and the monthly ED attendance figures were recorded as markers of overall radiology and hospital activity. Analysis of Variance (ANOVA) was performed to assess for trends, using SPSS version 22 (IBM, New York, USA) and an alpha of 0.05 considered statistical significance. The study was approved by the Institutional research board. 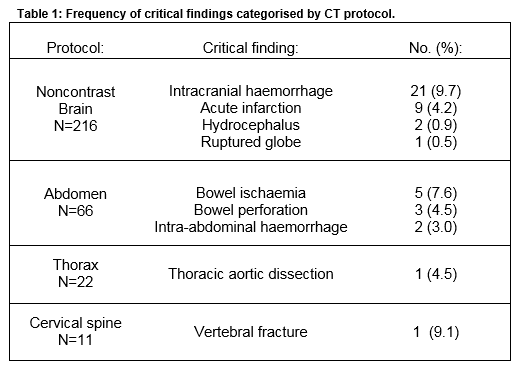 Discussion
In this study, we have observed significant increases in both the overall CT activity, overnight CT activity and the proportion of examinations carried out overnight. The percentage of CTs performed overnight increased up to threefold in 2015 when compared to 2007 (5.1% vs 1.8% respectively). While a relative decline in overnight CT imaging was observed in 2016, it is noteworthy that the proportion of CT activity performed overnight in 2016 (2.5%) was still higher than five of the first six initial years of the study period. Despite this increased demand, there was no significant trend in the yield of critical or significant findings throughout the study period. We believe that this increase in the proportion of CT examinations carried out overnight reflects a change in working practice and therefore, the contributing factors and the potential implications warrant consideration. Overnight CT increased from 2.9% in 2013 to 5% in 2014, coinciding with both the incorporation of a nearby ED service into our hospital and the implementation of the European Working Time Directive (EWTD) at our institution.

There is little comparable evidence in the international literature on what constitutes an appropriate yield of findings from CT in the overnight setting. A Dutch series of over 1000 patients undergoing emergency abdominal CT yielded urgent findings in 57.9% of cases8, while 13.8% of patients had clinically signifcant pathologies in an analysis of emergency CT brain examinations in non-trauma patients9. It is important to recognise that these studies were not performed explicity in the overnight setting and that marked differences exist in what is considered an ‘urgent’ or ‘significant’ finding making any direct comparison difficult. ED attendance increased by 30% in March 2014, as services were transferred from a nearby level two institution. The increase was sustained in 2015 and 2016. While this undoubtedly contributed to the overall activity of the radiology department (and the hospital as a whole) the fact remains that the proportion of CT imaging carried out during the overnight period was on the increase prior to this event and continued afterwards, which confirms that this event was not the sole contributor to increasing the overnight CT workload.

The advent of new clinical pathways is also likely to have influenced overnight emergency CT practice. For example, following the publication of the ESCAPE trial10 a national referral pathway for mechanical thrombectomy for the management of acute ischaemic stroke was commenced. This requires suitable patients to undergo an urgent CT neck and intracranial angiogram, accounting for the large number of these studies performed in 2016. The updated NICE guidelines for non-contrast CT brain in head trauma published in January 201411 may have also played a role by mandating that head injured patients meeting certain criteria undergo imaging within one hour of injury and others, including anticoagulated patients, should undergo imaging within 8 hours of injury. It is difficult to establish whether the introduction of EWTD has had an impact on the utilization of overnight CT. EWTD has resulted in an end to the traditional 24-hour ‘on-call’ system of service provision with on-site doctors instead working blocks of shorter ‘night shifts’. This perhaps has resulted in an attitudinal change such that access to advanced diagnostics similar to that available during the normal working day is expected. The majority of research on the effect of EWTD on medical working practices to date has focused on its effect on the training and health of doctors with little investigation into its impact upon resource and staffing implications.

In the USA, a large survey of academic radiology departments demonstrated a direct correlation between the expansion of after-hours radiology and costs, as the majority provided either financial or "time off" incentives for the provision of overnight services12. Indeed with the introduction of EWTD in our institution, radiologists receive time off in lieu the next day for performing and interpreting overnight CT studies, thus presenting a challenge to normal daytime service delivery. However, while it was impossible to determine the exact proportion of requests for CT arising from the ED as opposed to inpatient teams in our study it is reasonable to expect that the majority of overnight activity would originate in the ED. The Emergency Department at our institution operated an EWTD-compliant roster long in advance of its introduction hospital-wide and so this wouldn’t be expected to have a significant impact.

ED overcrowding has been an increasingly topical issue in Irish healthcare in recent years. It is unlikely that overcrowding independently affects the utilization of advanced imaging, other than as a measure of increased hospital activity. Overcrowding occurs when insufficient ward beds are available to accommodate the number of admitted patients in a given hospital. Access to overnight CT does not create additional bed capacity. However additional CT access overnight could potentially expedite the discharge of patients who may be waiting until morning for non-emergent but clinically indicated investigations.

We observed differences in diagnostic yield between different CT modalities. Perhaps most interestingly the vast majority of pathology on CTPAs (85%) was present on a chest radiograph performed prior to the CTPA. The majority of patients presenting with pulmonary embolism (PE) are haemodynamically stable and may be empirically anticoagulated if there are no contraindications. Urgent CTPA is indicated in patients presenting with signs and symptoms of pulmonary embolism who are haemodynamically unstable or who have contraindications to anticoagulation13. We believe a study specifically examining the usage of CTPAs in the overnight setting may be worthwhile.

Occupational fatigue has been identified as an important contributor to error and poor decision making across a variety of industries, particularly in aviation14. In addition to the physical and cognitive fatigue common to all healthcare professionals, radiologists are prone to visual fatigue which is recognised as a source of diagnostic error15. While the provision of overnight emergency coverage is an important component of a radiology trainee’s education and development of autonomy, performing large quantities of examinations during the overnight period generates the potential for reporting error and adverse patient outcomes.

This study has several limitations. Our analysis was limited to the month of March of each year. We chose this month as we believed it would be less subject to seasonal variations in CT activity and reflect an accurate representation of the overall trend. We acknowledge that the classification system we adopted for the CT findings (critical, significant and normal/non-significant) may be susceptible to interobserver variability. It must be acknowledged that in certain circumstances (e.g. suspected stroke) a ‘normal’ CT brain is critical in determining suitability for further treatment. In conclusion, this study demonstrates a significant increase in the proportion of CT imaging performed overnight over a ten-year period at an Irish tertiary referral hospital. We postulate that the introduction of EWTD compliant working practices, local reconfiguration of ED services and new clinical pathways have contributed to this increase. Increasing the usage of overnight CT has implications on the staffing and resource allocation within Radiology Departments.