Introduction
Pelvic floor dysfunction is a global term used to describe conditions such as pelvic organ prolapse, and faecal or urinary incontinence. The Pelvic Floor Centre is a multi-disciplinary clinic for pelvic floor dysfunction. The aim of this study was to assess patient satisfaction following joint colorectal-urogynaecology surgery in the Pelvic Floor Centre.
Methods
All patients who underwent a joint procedure in the Pelvic Floor Centre from 1st October 2015 to 31st October 2016 were contacted via telephone. Patient satisfaction was assessed using the Surgical Satisfaction Questionnaire (SSQ-8).
Results
Fifteen patients underwent joint surgeries between 1st October 2015 and 31st October 2016. All patients consented to the questionnaire. Patients underwent a variety of combined procedures including vaginal repairs, anal sphincter repairs, mid-urethral slings, perineal injections, and stapled trans-rectal resection of the rectum.
Discussion
Thirteen (86.7%) patients were satisfied with their surgery, and would recommend it to other patients with a similar condition. All patients were satisfied that their pain was well controlled after discharge. Eleven (73.3%) patients were satisfied with the time taken to return to daily activities, work, and their usual exercise routine. There is a high level of satisfaction amongst patients undergoing joint colorectal-urogynaecology surgery at the Pelvic Floor Centre. Further investigation into patient satisfaction with the clinic itself and international comparison is warranted.

Introduction
Pelvic floor dysfunction is a global term used to describe conditions such as pelvic organ prolapse, and faecal or urinary incontinence1. Approximately one in 5 women will undergo some form of surgery for pelvic floor surgery during their lifetime1,2. Traditionally these problems are treated by a variety of specialists working independently. The Pelvic Floor Centre (PFC), is to our knowledge, the only multidisciplinary pelvic floor clinic in the United Kingdom and Ireland with care provided by both colorectal and urogynaecology surgeons. Multidisciplinary in-hospital teams have been shown to improve both patient and doctor satisfaction3. The aim of this study was to assess patient satisfaction with joint colorectal-urogynaecology surgeries performed at the Pelvic Floor Centre.

Methods
All patients who underwent a joint colorectal-urogynaecology procedure in the PFC between 1st October 2015 and 31st October 2016 were identified and contacted via telephone. Patient satisfaction was assessed using the Surgical Satisfaction Questionnaire (SSQ-8), seen in Figure 1, a validated survey tool developed for patients undergoing surgery to correct prolapse and/or incontinence4.

Eleven (73.3%) respondents were “Very satisfied” or “Satisfied” with the time taken to return to their activities of daily living (ADLs), employment, and their usual exercise routine. Two (13.3%) women reported neutral satisfaction, and one (6.67%) reported that she was “Unsatisfied”. 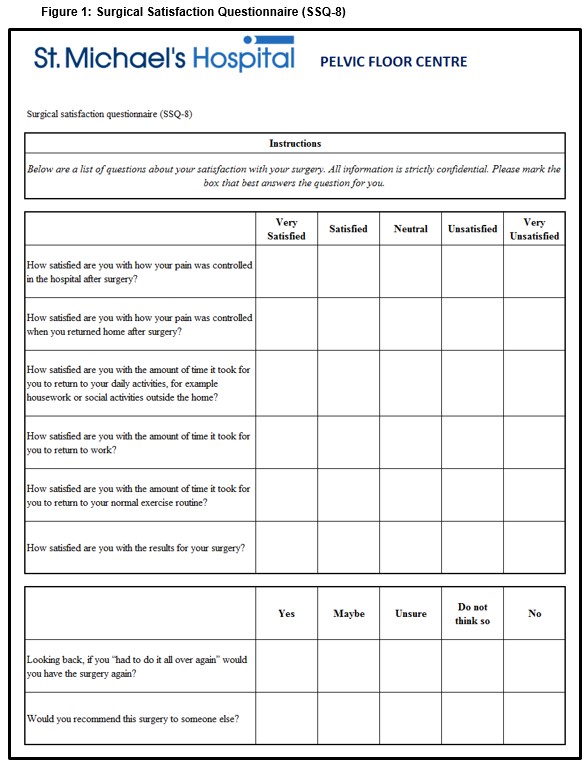 Discussion
This study has shown that there is a high level of satisfaction amongst patients undergoing joint colorectal-urogynaecology surgeries at the Pelvic Floor Centre, with over 85% of respondents satisfied with their surgery. Women were less satisfied with the time taken to return to their ADLs, employment, and exercise, though overall satisfaction rates remained above 70%. This may reflect an unrealistic patient expectation, however offers an interesting educational opportunity. The time between their surgery and answering the satisfaction questionnaire may have affected this. Those surveyed at a later point may be more satisfied as they have fully returned to their ADLs, employment, and exercise.

One of the limitations with the present analysis is the sample size of 15, which limits the ability to generalise our results. As this was a retrospective questionnaire, there is the possibility of recall bias. In contrast, we have a 100% response rate, high for a telephone-based survey5, and our survey tool has been validated in the area of pelvic floor surgery4. Further research is required to determine patient satisfaction in those attending the Pelvic Floor Centre who do not undergo surgical intervention.

Pelvic floor dysfunction overlaps between colorectal surgery and urogynaecology, and has traditionally been treated separately. Many women may wait years between treatments by individual surgeons. Multidisciplinary services have the potential to improve patient outcomes, as well as reducing cost for hospital groups3. While a smaller study, the present analysis has demonstrated that a high level of patient satisfaction can be achieved in a multidisciplinary team unit.

Disclosure:
The authors report no conflict of interest.