Conclusion
The peri-operative management and overall outcomes of PC-RPLND in our series are in-line with international standards.

Introduction
Testicular cancer is the most common neoplasm in 20- to 35-year-old men and accounts for one percent of all male neoplasms1,2. It has an incidence of 6.2 per 100,000 per year and an overall mortality of 0.3 deaths per 100,000 per year in the Irish male population3. It is also one of the most curable malignant conditions and has become a model for the multimodal management of malignancies4.
Metastases from testicular cancer follow a predictable path via lymphatic spread to the retroperitoneal lymph nodes5. The primary treatment of nodal disease is platinum-based chemotherapy. Twenty to fifty percent of patients have metastatic disease after chemotherapy, in the form of significant residual retroperitoneal disease. In this subset of patients, surgical resection of the residual disease burden plays an important part6.
In order to achieve complete cure, it is essential for these persistent lymph nodes to be resected as they may contain mature teratoma in 30-40% of patients or viable cancer in 10-20% of patients7. Teratoma is relatively resistant to chemotherapy and has a malignant transformation potential to equally chemotherapy resistant disease. Thus, resection of teratoma is imperative1. In patients presenting with disease in the retroperitoneum as the only location of metastasis after chemotherapy, post chemotherapy retroperitoneal lymph node dissection (PC-RPLND) has the potential to cure almost 80% of cases8.
Recently, Considine et al., in an update of only other RPLND series in Ireland reported low recurrence rates following PC-RPLND9. Complex surgical procedures such as PC-RPLND which have accepted complication rates need to be centralised to high volume units10. The aim of this study was to assess the utilisation and outcomes of PC-RPLND.

Methods
A retrospective observational study was performed of a prospectively maintained testes cancer database. All patients who underwent a PC-RPLND at a tertiary referral university teaching hospital between 2002 and 2015 were included. All procedures were carried out by a single surgeon who had completed a dedicated urological oncology fellowship with a specific interest in testicular cancer. Clinical demographics, histopathological characteristics and peri-operative details were obtained from patient charts and the prospective database maintained by the departmental cancer clinical nurse specialist. Post-operative complications were described by severity according to the Clavien-Dindo classification of surgical morbidities11. Early postoperative morbidity was defined as any adverse event that arises within 30 days of the surgery that altered the typical course of recovery, and late morbidity was any event occurring beyond the 30-day period.
In order to analyse recurrence free survival (RFS), recurrence was noted as an event and defined as radiological or pathological recurrence of viable cancer. RFS was calculated from the date of PC-RPLND to the date of recurrence. In order to analyse disease specific survival (DSS), death from disease was noted as an event, and patients who survived were censored at their last date of follow-up. DSS was calculated from the date of PC-RPLND to the date of disease-specific death. In this study, death from disease was defined as death from testicular cancer or its treatment. Patients who died of other causes (if any), were censored at their date of death. Statistical analysis was performed using Kaplan-Meier survival curves with SPSS version 20 (Armonk, NY, USA). The proposed study received ethical approval from the Clinical Research Ethics Committee (CREC) of the university teaching hospital. 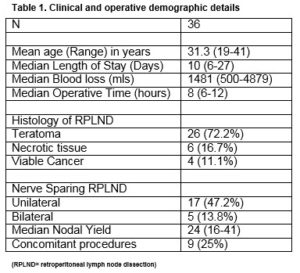 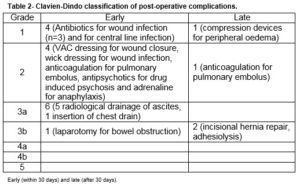 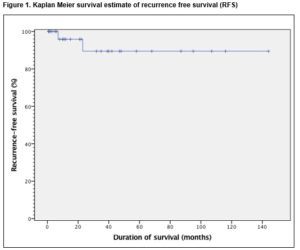 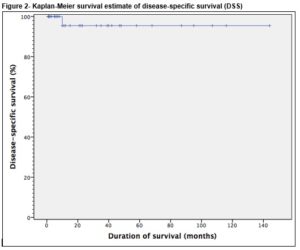 Late morbidity (n=4) involved peripheral oedema (n=1) managed by customised compression device, adhesions (n=1), pulmonary embolism (n=1) and an incisional hernia (n=1). There was no perioperative mortality involved in this study. The mean follow-up of patients was 35 months (range 1-144). Thirty-four (94.4%) remain in complete remission while 5.6% (n=2) had disease recurrence. Of these, only one recurred within the previous dissection field (around the site of prior cavotomy), 23 months after PC-RPLND. This patient was subsequently managed by surgical excision of a portion of the IVC and the recurrent tumour within it, and tubular graft replacement. The other patient had radiological relapse within 7 months post surgery, outside the previous dissection field (around the retrocrural nodes and adjacent spleen). This patient subsequently had progressive disease in the mediastinum and neck which led to a combined surgery of neck, thorax and upper limb girdle. One patient was died of progressive disease following unresectable residual disease 10 months post PC-RPLND. Clearance was not achieved at first setting due to encasement of duodenal and renal vessels, and he subsequently developed retroperitoneal, liver and mediastinal residual disease. These persisted despite additional aggressive chemotherapy post surgery. Overall, the 5-year RFS and DSS were 94.4% and 97.2%, respectively, Figure 1 and 2.

Discussion
The incidence of testicular cancer in Ireland is 6.2 per 100,000 per year (132 new cases per year)2 and the lifetime risk of dying from this cancer is about one in 5,0003. It predominantly affects young men and most of these never require addition surgical intervention, e.g. RPLND. As a result, the overall number of RPLNDs performed annually is low. In the US, RPLND is a standard approach for the surgical management of non-seminomatous germ cell tumors in both the primary and post-chemotherapy setting. The total lymph node yield of the RPLND is an independent predictor of disease recurrence, with more lymph nodes removed associated with improved outcomes. As is the case with other complex surgeries, RPLND performed by higher volume surgeons is associated with higher total lymph node count and may therefore be associated with improved outcomes and long-term survival12. Despite this, recent literature has shown that the median number of RPLNDs logged annually was one, with three urologists performing 23% of all RPLNDs performed in the United States. Seventy-five percent of urologists logged a single RPLND while urologists who logged two RPLNDs in a year were in the top 25% of performers with over half (52%) of all RPLNDs performed by urologists who logged one or two RPLND10. A recent national review of RPLND performed in the UK demonstrated 162 men underwent RPLND by 20 surgeons in 17 centres. The mean (range) case volume per centre was 9 (2-32) and the median (range) case volume per surgeon was 6 (1-30)13. In comparison Ireland- there are only a few surgeons (n=3) undertaking this surgery however our volume compares favorably. We report the experience of a single surgeon performing RPLND in the post chemotherapy setting.

The histological finding of RPLND specimens varies- with documented residual teratoma up to 60%6,8,14,15. Teratoma and necrotic tissue are the most common histology found with viable cancer rates at ~10%16. In a review by Heidenreich, teratoma was found in 30-40% of patients, viable germ cell tumour (GCT) in 10-20% and fibrosis found in remaining selection of patients17. Residual teratoma has the capacity to grow and invade local structures, leading to growing teratoma syndrome18. Malignant transformation has also been observed19. Late recurrence is also a risk for patients with teratoma, which increases the potential of being refractory to chemotherapy20. Viable cancer and teratoma was present in 83% of our series. Following RPNLD, only one patient in our cohort developed a recurrence within the field of dissection. The complexity of the surgery is highlighted by the number of additional procedures (22%) included such as nephrectomy and vascular resections. Djaladat et al. demonstrated that Thirty percent of patients require adjuvant procedures at the time of post-chemotherapy RPLND6. In that series 15% of adjuvant procedures were vascular such as aortic or caval resection/replacement while nephrectomy comprised 14%. Considine et al., reported a rate (28%) of additional procedures similar to our series however a much higher concomitant nephrectomy rate of 20.5% (n=16)9. The template of dissection and the disease burden has an impact on this.

Furthermore, there is considerable morbidity associated with the extensive resection however the peri-operative mortality rate is low21- possibly due to the fitness of these young male patients- there were no peri-operative deaths in our series. There was no peri-operative mortality in our cohort. We did experience an early complication rate of 42% however this reduced to 19% when minor (Clavien Dindo grade 1 and 2) complications were excluded. These findings are in line with a review of primary and PC-RPLND complications by Baniel et al22. It is acknowledged that PC-RPLND is a greater surgical challenge than primary RPLND and has an expected higher morbidity rate. The ability to perform a nerve sparing RPLND adds an additional layer of complexity to the procedure however can reduce the significant side effect of retrograde ejaculation which is a major factor for such young men. Despite this, our series demonstrates favourable recurrence free survival and disease specific survival rates.

Our study is only the second series of RPLND reported in Ireland. Metastatic testicular cancer is a rare disease and the number of PC-RPLND performed is low. Our retrospective series is limited in numbers but presents the single surgeon experience over 14 years with favourable peri-operative outcomes and follow up. Complex surgery such as RPLND needs to be performed by high volume surgeons- in Ireland currently there are only three surgeons performing this procedure in three separate centres. There are ongoing discussions regarding the centralisation of this service. In this study, we report a single centre experience of PC-RPLND for metastatic NSGT of the testes. The peri-operative management and overall outcomes are in-line with international standards- due to the small caseload and complexity of this disease we advocate the management of these cases in a limited number of tertiary referral centres.

Funding:
This research did not receive any specific grant from funding agencies in the public, commercial, or not-for-profit sectors.

Conflicts of Interest
No conflict of interest to declare

Ethical Approval:
The proposed study received ethical approval from the Clinical Research Ethics Committee (CREC) of the university teaching hospital. All procedures performed in studies involving human participants were in accordance with the ethical standards of the institutional and/or national research committee and with the 1964 Helsinki declaration and its later amendments or comparable ethical standards.