In a retrospective review of 106 consecutive vasectomy reversals (May 2002-April 2015) in our institution, patients were stratified according to post vasectomy obstructive interval (PVOI); less than 5 years, 5–10 years, 10-15 years and >15 years. Positive semen analysis and live birth rates were analysed. Logistic regression tested potential predictors for these outcomes. Overall patency rate (positive semen analysis) was 75% and live birth rate was 41%. Shorter PVOI was a significant predictor for positive semen analysis (p=0.028). Male smoking or male age at reversal had no significant correlation (p=0.99 and 0.95 respectively). For a live birth, PVOI and female age (threshold: 36 years) at reversal were significant predictors (p=0.007 and p=0.043 respectively).  Outcomes compared favourably with international series yielding satisfactory pregnancy rates, particularly with a short obstructive interval and in females <36 years of age.

An alternative to vasectomy reversal is epididymal or testicular sperm retrieval by aspiration or open surgical extraction followed by in vitro fertilisation (IVF) with intracytoplasmic sperm injection (ICSI). Pregnancy rates with ICSI range from 20-44%5. The live birth rate with this assisted reproductive technique (ART) using testis sperm extraction (TESE) and ICSI is 23% in our institution and reaches 27% in cases of obstructive azoospermia6. Such ARTs, and to a lesser extent for vasectomy reversal, are time consuming, have potential morbidity, and incur psychological and financial costs7. Units offering such complex technology should publish their peer reviewed results including predictors for successful outcomes6. To facilitate couples in making informed treatment decisions, we reviewed our success rates (patency and live birth rates) and variables influencing success after vasectomy reversal, to compare this data with international results and our TESE and ICSI published outcomes.

A retrospective review was performed on all men undergoing vasectomy reversal in the Assisted Conception Unit of Clane General Hospital from May 2002 – April 2015. The original vasectomies had been performed between 1983 and 2012 in various centres.

Reversal of vasectomy by vasovasostomy was performed by a single urologist (JT). Under general anaesthesia via a midline 2-3 cm. incision, the vasectomy site was bypassed, by end to end anastomoses, completing a modified 1-layer technique, using 7-0 monocryl sutures over a 2-0 nylon suture stent in all procedures. Visual aid was by surgical loupes, not operating microscope. Post-operative care included scrotal support dressing, analgesia and suggested rest. Stent sutures were removed at day 5.

Recorded patient demographics included male age at vasectomy and reversal, male smoking status, female partner age at reversal, post vasectomy obstructive interval (PVOI), indication for reversal, indication for cancelled reversal, concomitant TESE, postoperative semen analysis, and pregnancy outcome. Postoperative semen analysis was offered to all patients 3 months after surgery.  Patency was defined as the presence of sperm with tails, with or without motility8.  The dependent variables of interest were positive semen analysis and spontaneous pregnancy occurrence with a live birth. Patients were stratified according to PVOI; less than 5 years, 5 – 10 years, 10 -15 years and >15 years.  Live births were determined by direct patient enquiry. The study was approved by the institutional ethics committee.

Amongst this non randomised cohort, a proportion of couples with risk factors for failed vasectomy reversal (prolonged PVOI and/or increased female age) were offered intraoperative sperm retrieval by TESE with cryopreservation concomitant with reversal procedure. In the event of failed reversal such couples could proceed directly to ICSI.  The technique for TESE involved a transverse 5mm incision through the tunica albuginea whereby testicular parenchyma was extruded to deliver a 5x5mm fragment10.

Statistical data are represented as mean ± standard deviation. Given that patency and spontaneous pregnancy after vasectomy reversal are both nominal/binary variables (success/failure, occurrence/non-occurrence), logistic regression was the appropriate analytical method. Analysis was carried out in the MATLAB© development environment. 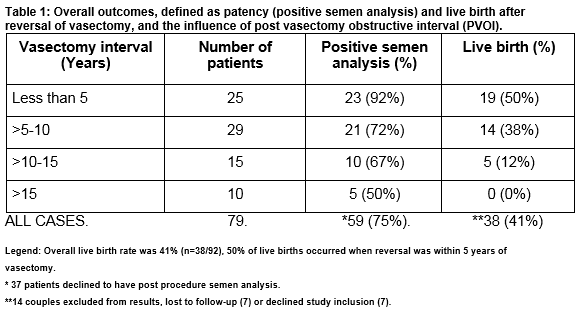 With increasing rates of vasectomy worldwide and societal changes, international data indicates increasing numbers of men seeking vasectomy reversal11-13. This trend, although not documented, likely pertains in Ireland. The high percentage of men in this series with a new partner reflects societal changes in Ireland. The significant one-third of couples seeking reversal because of change of mind after vasectomy may reflect inadequate counselling prior to vasectomy.  As expected, the death of a child was a rare but unavoidably sad indication for reversal.

Options for couples seeking a family after vasectomy include; local or international adoption, artificial insemination with donor sperm, vasectomy reversal, and TESE sperm retrieval and subsequent ICSI. Considerations among couples include; availability and access to services, success rates, couples ages and time restraints, complexity and associated morbidity, avoidance of treatment to healthy female partner (i.e. achieving a spontaneous/ natural pregnancy), cost considerations, and moral/ societal factors2,3,9,13. The comparative costs, complexity and success of ART by vasectomy reversal versus TESE and ICSI are particularly relevant in this vulnerable patient group because of the lack of availability of the latter treatments in the public health sector14. There is a conflict of interest for sub-specialists in reproductive medicine in this era of multi-media internet access to achieve the correct balance between patient information about services and outcomes versus unobjective advertising15. For these reasons, we now report our results for vasectomy reversal to be considered with our previous report on TESE6.

For couples, their criterion for success after vasectomy reversal is a live birth. Our success rate of 41% compares favourably with international figures (20-70%) from individual specialist centres and metanalyses2,8. Regarding predictive factors for success, our findings confirm PVOI and female age at reversal are independent predictors for achievinga live birth. Ovarian reserve, decreasing with advancing age, is a critical factor in female fertility especially with a male with reversed vasectomy16. Confirming female age >36 years an adverse predictor for successful vasectomy reversal, such couples in this unit are all counselled on alternative ARTs with potentially higher success rates.

Prolonged PVOI was confirmed to be an adverse predictive factor as in other series2.  No live birth was achieved with obstructive interval >15 years, whereas 50% of live births occurred with obstructive interval <5 years.  Again such couples in this unit are offered the alternate approach of TESE and ICSI with our higher documented success rates6.  The couples with prolonged PVOI in this series who after counselling opted for reversal did so either because of reduced costs versus TESE and ICSI, non-acceptance of ART because of complexity or on moral grounds, or a diminished ambition for a pregnancy.

While male smoking was suggested as an adverse predictor for patency after reversal in a metanalyses17, neither male smoking nor male age at reversal correlated with post-operative patency or live birth in our smaller series.

Only 75% of patients attended for postoperative semen analysis at 3 months.  Many couples with diminished ambition for pregnancy, or on moral grounds, were satisfied to omit post-operative testing and instead wait for any spontaneous pregnancy outcome. A similar large proportion of men neglect to have a semen analysis after vasectomy in this and units elsewhere18. Our patency rate of 75% may have increased after repeated semen analysis at 3 monthly intervals (not routinely offered in our unit) as patency can be achieved up to 1 year after surgery19. The standard definition of a post reversal positive semen analysis (i.e. presence of any sperm with tails, with or without motility) excludes the relevance of motility.  Sperm motility was a predictor of pregnancy in one study, where motility <5% versus >20% at 3 months, represented a probability of conception of 19% versus 53% after 2 years8. In this unit, motility is reported but was not included as an analytic variable in this study.

The role for TESE in conjunction with vasectomy reversal is debated20. Dual concomitant procedures can be offered when; only vasoepididymostomy not vasovasostomy is possible, prolonged PVOI, and /or increased female age21. The average female age at ICSI in our cohort is 37 years (range: 27 - 44)6.  In this unit, both primary vasoepidydimostomy for reversal, and secondary vasoepidydimostomy (i.e. repeat attempted reversal vasectomy after failed procedure here or elsewhere) were abandoned prior to this study based on poor outcomes. Such couples are routinely offered TESE/ICSI as alternative ART. Couples' factors in considering dual procedures include cost, desire for a natural pregnancy and avoidance of intervention by ART in a healthy female partner21.In this series, the sub cohort who opted for concomitant TESE had prolonged PVOI but achieved 47% reasonable patency rate. The low subsequent spontaneous pregnancy rate of 9% justified performing TESE, but of interest only a small minority proceeded to ICSI6. Regarding financial considerations, vasectomy reversal may be more cost-effective than ICSI when more than one child is desired22. A USA cost analysis on vasectomy reversal and with female partners <37 years demonstrated a live delivery rate of 17% and 8% for vasectomy reversal and ICSI with costs per delivery of $28,530 and $103,940 respectively22.

Our patency and live birth rates are comparable with international studies. We   confirm female age and interval to vasectomy reversal as independent predictors for a live birth. These results show reversal yields favourable live birth rates but mainly in couples with a short obstructive interval and in females <36 years of age.  Couples should be counselled openly about these expectations for success and alternate approaches (including no intervention) offered if they have adverse predictors.

The authors declare they have no conflicts of interest relating to this study and publication.