Non-Tuberculous Mycobacterial (NTM) infections occur in HIV-negative patients with or without underlying lung disease. It is generally felt that these organisms are acquired from the environment. Unlike tuberculosis, there are no convincing data demonstrating human-to-human OR animal-to-human transmission of NTM. We report a case of NTM infection in a 38 year old patient with underlying emphysematous lung disease. The case highlights the diagnostic dilemma which occurs when persistent sputum Acid- Fast Bacilli (AFB) smears are positive, but Nucleic acid amplification test is negative. To aid the diagnosis and rule out Pulmonary Tuberculosis as the other differential diagnosis, we applied American Thoracic Society/Infectious Disease Society of America (ATS/IDSA) guidelines & recommendations1. The decision to treat was taken on basis of CT findings, clinical, microbiologic criteria and expert consultation with Microbiology department at Waterford.

A 38 Year old gentleman, truck driver by occupation, presented with productive cough, shortness of breath on exertion & night sweats of 15 days duration. He had joint pains with rash affecting ankle joints for 15 days which resolved spontaneously. He was a keen football player and would feel short of breath whilst playing football in the three months prior to presentation. He attributed this to smoking. He smoked 3 packs/day for 15 years. There was no history of sexual promiscuity, drug or alcohol abuse. He had tattoos over both arms. His background history was significant for a spontaneous Pneumothorax treated conservatively 18 years ago. There was no history of Pulmonary TB or TB exposure in the past. He was BCG vaccinated. There was no family history of Emphysema or Liver disease. His Chest X Ray showed Right upper zone infiltrates. His CT Thorax shows bilateral extensive emphysematous lung disease with Right upper lobe infiltrates. 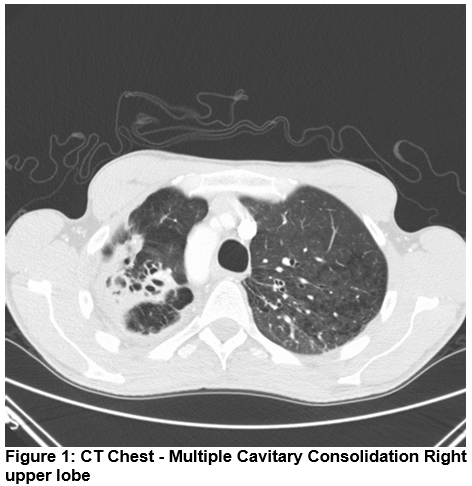 Pulmonary infections with NTM occur in patients with or without predisposing conditions and recognition of this disease is delayed due to its indolent nature3. Symptoms & signs are non-specific. Fever & weight loss occur less frequently than in patients with typical tuberculosis. Since these infections frequently coexist with underlying lung disease such as COPD or Bronchiectasis, physical findings of the latter disease may predominate4,5. In our case report, findings of underlying emphysematous lung disease were subtle & symptoms of shortness of breath on exertion was elicited only on further probing. Laboratory results in our patient showing persistent sputum for AFB positive & Gene Xpert for M. Tuberculosis negative raised a diagnostic dilemma both in terms of isolation of the patient & treatment involved7. Final diagnosis of M. Malmoense infection was made as the BAL specimen confirmed growth on culture

As suggested by ATS/IDSA guidelines, Expert consultation should be obtained when NTM are recovered. Patients who are suspected of having NTM lung disease, but do not meet diagnostic criteria should be followed until the diagnosis is finally established or excluded6,8. Making the diagnosis of NTM lung disease does not per se necessitate the institution of therapy, which is a decision based on potential risk & benefits of therapy for symptomatic patients.

The authors confirm no conflict of interest.