Spontaneous Pneumothorax; a Collapse in Management?

Revised guidelines for the management of spontaneous pneumothoraces were published by the British Thoracic Society in 2010, however compliance remains poor. A retrospective review was performed on patients diagnosed with a pneumothorax over a 26 month period (January 2012 – March 2014). Of the 57 patients identified, 43 (75%) were diagnosed with spontaneous pneumothorax. 12 patients (21%) had pre-existing lung disease, and 16 patients (28%) admitted to having had a previously documented pneumothorax. 19 patients (33%) were reported as smokers. The main symptoms reported were chest pain (93%) and shortness of breath (54%). Observation was appropriate in 18 cases (31%), while aspiration alone was performed in 9 (16%) with chest drains required in 25 cases (44%). Five patients (9%) were admitted directly under a medical team. Our study demonstrated good compliance with BTS guidelines. The decision to observe, aspirate, insert a chest drain or directly refer to the medical team was appropriate in the majority of cases studied.

A pneumothorax may be defined as an abnormal collection of air in the pleural space, or the area between the lungs and chest wall1. A primary spontaneous pneumothorax (PSP) is a pneumothorax that occurs without a precipitating event in a person with no previous history of lung disease. In contrast, a secondary pneumothorax is one that occurs in the setting of underlying lung disease, such as chronic obstructive pulmonary disease (COPD). Another type includes traumatic pneumothoraces, often the result of blunt trauma or penetrating injury to the chest wall. In the majority of cases PSPs are the result of the rupture of small sacs of air, called blebs or bullae. These emphysematous-like changes may often be present in previously asymptomatic patients and detected incidentally. Rupture of these blebs may be caused by changes in air pressure or a sudden deep breath, resulting in the release of air into the pleural space. This creates abnormal pressure on the lung and may facilitate its subsequent collapse. Smoking is a well-known risk factor in the development of PSPs, and the relative risk increases as the number of cigarettes smoked per day increases. Additional risk factors include a positive family history, Marfan’s syndrome and an increased height-to-weight ratio, and pregnancy2. Some authors also postulate that genetic factors may play a role. The incidence of PSPs varies geographically, from 7.4 per 100,000 population per year in the United States to 37 per 100,000 population per year in the United Kingdom1. In Ireland, pneumothorax admissions accounted for approximately 5,418 bed days3.

Clinical presentation often varies, and may be quite dramatic in certain cases of large pneumothoraces. Shortness of breath and pleuritic chest pain remain the most common presenting symptoms. However a minority of patients may be aysmptomatic and the diagnosis may be made incidentally on physical examination or during evaluation of another medical condition. Initial treatment is directed at removing air from the pleural space, with subsequent management focused on preventing recurrence.  Initial management options include observation with oxygen supplementation, manual aspiration and chest drain insertion, while surgical intervention may occasionally be warranted4. In recent years published clinical consensus statements have been developed to aid physicians in the diagnosis and management of PSPs5,6. However despite recent studies suggesting that compliance with these guidelines is improving, adherence remains suboptimal among general medicine and Emergency medicine staff5,7. This study was conducted to ascertain the adherence to published guidelines in managing patients presenting with PSPs. These guidelines and standards include the BTS Guidelines 20104 and the American College of Chest Physicians Delphi Consensus Statement 20016.

A retrospective study was performed using data collected from 43 patients diagnosed with a PSP in the Emergency Department (ED) of St. Vincent’s University Hospital over a 26 month period (January 2012 – March 2014). Diagnoses were identified using an electronic patient tracking IMS system, MAXIMS. A study tool was designed using the Sphinx software system and used to record adherence to the aforementioned standards when manually viewing patient records via MAXIMS. The primary outcome measures that this audit sought to establish was the rate of failure of conservative management and aspiration alone as the primary treatment modality for PSPs in our ED. Secondary outcome measures included documentation of smoking status, presenting symptoms and signs, imaging modalities used, appropriate size classification, appropriate management based on size of pneumothorax and clinical presentation, patient disposition and rates of complications. 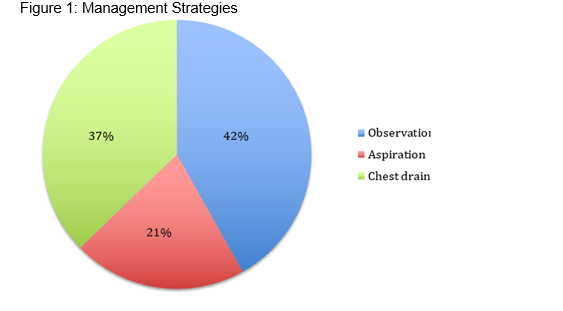 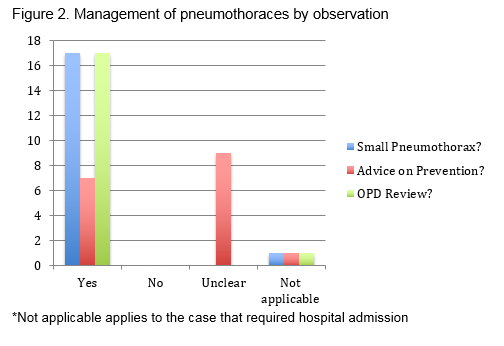 A total of 43 patients were identified with a documented diagnosis of primary spontaneous pneumothorax. 20 patients (47%) were reported as smokers. 12 patients (28%) had no history of smoking, while smoking history was not documented in 11 cases (26%). The main symptoms reported were chest pain (40 patients (93%)) and shortness of breath (25 patients (54%)). 6 patients (14%) were found to be hypoxic (02 sats<94%) on presentation to ED. Other vital signs were stable in all patients. Physical signs such as decreased breath sounds and hyper-resonant percussion were documented in 15 patients (35%). All 43 patients had a Chest Xray (CXR) on admission. Of these, 23 were classified as small pneumothoraces (visible rim <2cm between lung margin and chest wall) (53%) and 20 were classified as large (visible rim > 2 cm) (47%). Management strategies employed are displayed in Figure 1. 18 cases (42%) were managed with observation alone. 9 patients (21%) were managed with aspiration alone. 16 cases (37%) required chest drain insertion.

In patients who were observed and offered conservative management, all 18 patients (100%) were diagnosed with a small pneumothorax based on CXR. 17 patients (94%) were clinically stable or non distressed at presentation (Figure 2). 1 patient was initially diagnosed as a small pneumothorax and managed conservatively, however ultimately required admission for observation after repeat imaging showed a slight increase in size of the pneumothorax. 17 patients (94%) were appropriately discharged despite the presence of a small residual pneumothorax. Advice against prevention was documented in only 7 of these cases (41%), however all discharged patients were provided with an outpatient review and repeat CXR within 2-4 weeks.

In those managed by aspiration alone, 7 of the 9 cases (78%) were aspirated as per BTS guidelines (no more than 2.5L of air) using a 16-18G cannula. The amount of air aspirated was not documented in two cases (Figure 3). All 9 patients improved symptomatically post aspiration, remained for a period of observation and had a repeat CXR shortly after the procedure.  None of these patients required a second intervention (either repeat aspiration or chest drain insertion). In 7 patients (78%) the repeat CXR demonstrated decreased size or resolution of the pneumothorax prior to discharge. Documentation regarding education on prevention of recurrent pneumothorax was observed in only 6 cases (67%). An outpatient review was correctly arranged for 8 of the 9 patients. The remaining patient managed by aspiration alone required hospital admission for overnight observation due to persistent size of the pneumothorax. 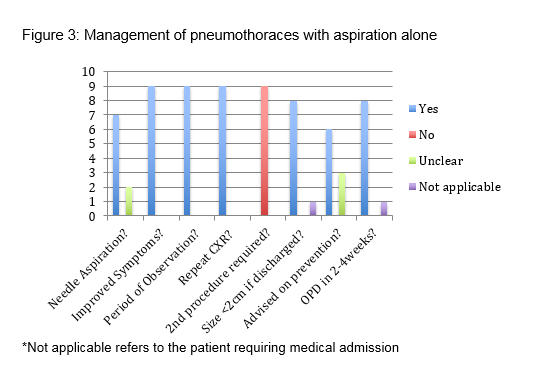 As per BTS guidelines, 16 patients (37%) were managed with a arrow chest drain, consisting of an 8Fr polyurethane catheter over an 18G needle using the Seldinger technique. 94% (15 patients) of these were large pneumothoraces at presentation. All of these patients were symptomatic, and aspiration had previously been attempted in 10 cases (63%). It was not documented if a second aspiration was attempted in these cases. All patients received a CXR post procedure and no complications were reported. All patients were also admitted or referred to a respiratory physician. 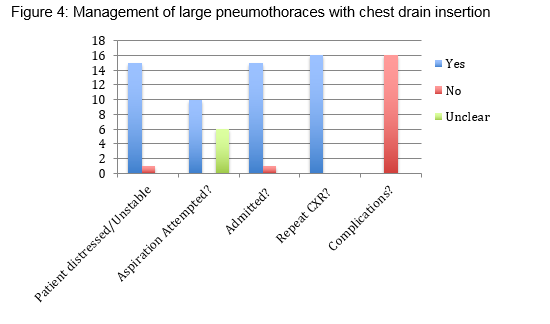 This study considered patients in terms of their presenting symptoms, background and size of pneumothorax, and demonstrated good compliance in managing pneumothoraces as per the BTS Guidelines set in 2010. The decision to observe, aspirate or insert a chest drain was appropriate in the majority of cases studied. The primary outcome measures that this audit sought to establish was the rate of failure of conservative management and aspiration alone as the primary treatment modality for pneumothorax in our emergency department. Conservative management was found to be a safe, effective strategy in patients who were diagnosed with a small pneumothorax and clinically stable. Advice on prevention and an early outpatient review is paramount to ensure a favourable outcome. All cases managed conservatively showed resolution of pneumothorax at their outpatient review two weeks after discharge. In those presenting with a large pneumothorax or clinically distressed, aspiration of no more than 2.5 litres of air is recommended as a first line intervention. 63% of our cases initially aspirated ultimately required a chest drain. In the remaining cases it was unclear if an aspiration attempt had been made prior to chest drain insertion. It was also unclear in the majority of these cases whether a second attempt at aspiration had been performed. However in the majority cases managed with aspiration alone there was successful resolution of the pneumothorax both in terms of symptoms and imaging, and no complications were reported. 37% of our patients (16/43 patients) required thoracotomy and drain insertion. Almost all were clinically distressed and associated with a large pneumothorax on imaging. Of note at least 63% of these cases (10/16 patients) had failed aspiration.

This study also considered secondary outcome measures such as presenting symptoms and signs, risk factors, imaging modalities and complication rates with regards to the management of primary spontaneous pneumothoraces. At least one third of our patients presented were smokers, a known risk factor for the development of pneumothoraces. The main symptoms reported were chest pain and shortness of breath. Decreased breath sounds and hyper resonant percussion are also key clinical findings suggestive of the presence of a pneumothorax, and these were also documented after physical examination. Vital signs were stable in the majority of patients. As per BTS guidelines, the size of the pneumothorax guides management. The majority of cases were correctly identified by Chest XRays. The value of upright expiratory chest radiographs in detecting pneumothoraces has recently been questioned and one study using inspiratory and expiratory upright chest radiographs detected pneumothorax with equal sensitivity8. All patients received a Chest X-Ray post procedure. Appropriate follow up was also arranged for those deemed fit for discharge. These patients were given an outpatient appointment within two weeks of their discharge with a repeat CXR to ensure resolution of the pneumothorax. There were no patients that were documented to have had recurrence of symptoms.

The rate of documentation as to whether advice was given to patients prior to discharge with regards to preventative strategies for pneumothorax recurrence, for example smoking cessation, flying etc, was noted to be low. Pneumothoraces and their treatment may be associated with both immediate and delayed complications, and patients should be informed of these. In a large or persistent pneumothorax, pulmonary oedema may be caused by abrupt re-expansion of the lung (10%); chest drain insertion may damage blood vessels resulting in haemothorax (5%)9. Recurrence rates often vary, and depend on the treatment method and the follow-up period, but some studies have documented recurrence rates of up to 30%10. Other complications include vagal reactions secondary to pain caused by lung re-expansion and intercostal neuralgia. Introduction of a patient discharge advice leaflet may provide a cost effective means to prevent these complications.