Quantifying the Benefits of cycling

The World Health Organization developed the Health Economic Assessment Tool (HEAT) to estimate the value of reductions in mortality resulting from specified amounts of cycling 1. From a recent meta-analysis of studies investigating the effect of cycling on all-cause mortality, the reduction in mortality risk for cycling 100 minutes per week is estimated to be 10.0% (95% confidence interval = 6.0 – 13.0%) 2. This risk reduction is controlled for other forms of physical activity, e.g. leisure-time or occupational physical activity, and other health behaviours such as smoking 3. At the average journey time for the Irish commuter (28 minutes in 2016) 4, a commuter would be cycling for 280 minutes per week.

In the decade following the publication of Ireland’s first National Cycle Policy Framework, much effort has been made to achieve the overall target of 10% commuting by bike by 2020 6. It does not seem likely that the target will be achieved. Between Census 2011 and Census 2016, the proportion of the total commuting population who chose cycling as their main mode of transport increased from 2.2% to only 2.7% 5.

Among the Framework’s comprehensive package of interventions that can increase numbers of people cycling, one of the major objectives is the development of physical cycling infrastructure. In particular, this would ensure that the urban road infrastructure (excepting motorways) is designed / retrofitted to be cyclist-friendly, and that traffic management measures are also cyclist-friendly 6.

The Greater Dublin Area Cycle Network Plan notes that the most plausible way of achieving the national target is to achieve a much higher proportion of trips by bicycle in urban areas compared to the national average, particularly in the greater Dublin area, where cycling is already much more common 7. If the target 10% national figure were to be achieved by focusing on increasing the number of cyclists in the Dublin region alone, the proportion of commuters cycling in Dublin would need to reach 31.5%. In Census 2016, 6.3% of the commuting population in Dublin were cycling 5.

In 2013, the National Transport Authority published a survey of current cycling infrastructure in the greater Dublin area, along with detailed recommendations for a state-of-the-art cycling network 7. The survey found that the quality of service provided by current cycling infrastructure in Dublin was far below the standard advised in the Irish National Cycle Manual 8, where the predominant provision for cycling in the Dublin City Council (DCC) area was by either on-street (painted) cycle lanes or shared bus lanes.

The percentage of the whole commuting population in the Dublin region commuting by bicycle in Census 2016 was 6.3% 5. The equivalent figure for the same time period in the Greater Copenhagen area was 41% of trips to work or study 9.

We mapped the current state of cycling infrastructure along a sample of 8 radial routes into Dublin city centre in April 2018. Routes were selected from local knowledge of busiest arterial commuter routes. Details of cycling infrastructure were recorded for a total of 19km of roadway and mapped using a browser-based programme that allows for the creation of custom maps 10. Cycling link types were categorised as one of four broad types designated in the Irish National Cycle Manual 11 (Figure 2). These were mixed/shared street, cycle lanes, bus lanes and cycle track.

Mixed or shared streets are suitable in low-traffic single-lane environments, where cyclists and pedestrians take precedence over vehicular traffic. The key feature is that cyclists “take the lane” alongside motor vehicles.

Cycle lanes are lanes on the carriageway that are reserved either exclusively or primarily for the passage of cyclists and are normally located on the kerb side of the road. Crucially, cyclists are not physically protected from motorised traffic, and it is important that the traffic regime is appropriate to the presence of cyclists; they are only effective when unhindered by parking and loading activity.

The Irish National Cycle Manual includes three options within the definition of bus lanes. Cyclists can cycle with the buses in the bus lane, or in a mandatory cycle lane (marked with a solid white line) alongside the bus lane, or in an advisory cycle lane (marked with a broken white line) with a bus lane alongside it. For this study, all three options are reported in the same category as there is little practical distinction between them in the Dublin region.

Cycle tracks differ from cycle lanes in being physically segregated from motorised traffic, either by a kerb or by bollards. Cycle tracks are generally for situations where the traffic regime is unsuitable for cycling and cannot be otherwise mitigated, as on arterial roads with a high volume of traffic.

For comparison, 8 radial routes into Copenhagen city centre were selected using local knowledge and surveyed using Google Street View images from May–June 2017. Details of cycling infrastructure were recorded for a total of 15km of roadway and custom-mapped using the same browser-based programme. The routes were surveyed using detailed Street View and satellite imaging, and cycling infrastructure was categorised as before.

Descriptive statistics for the current infrastructure in the two cities were produced for comparison. 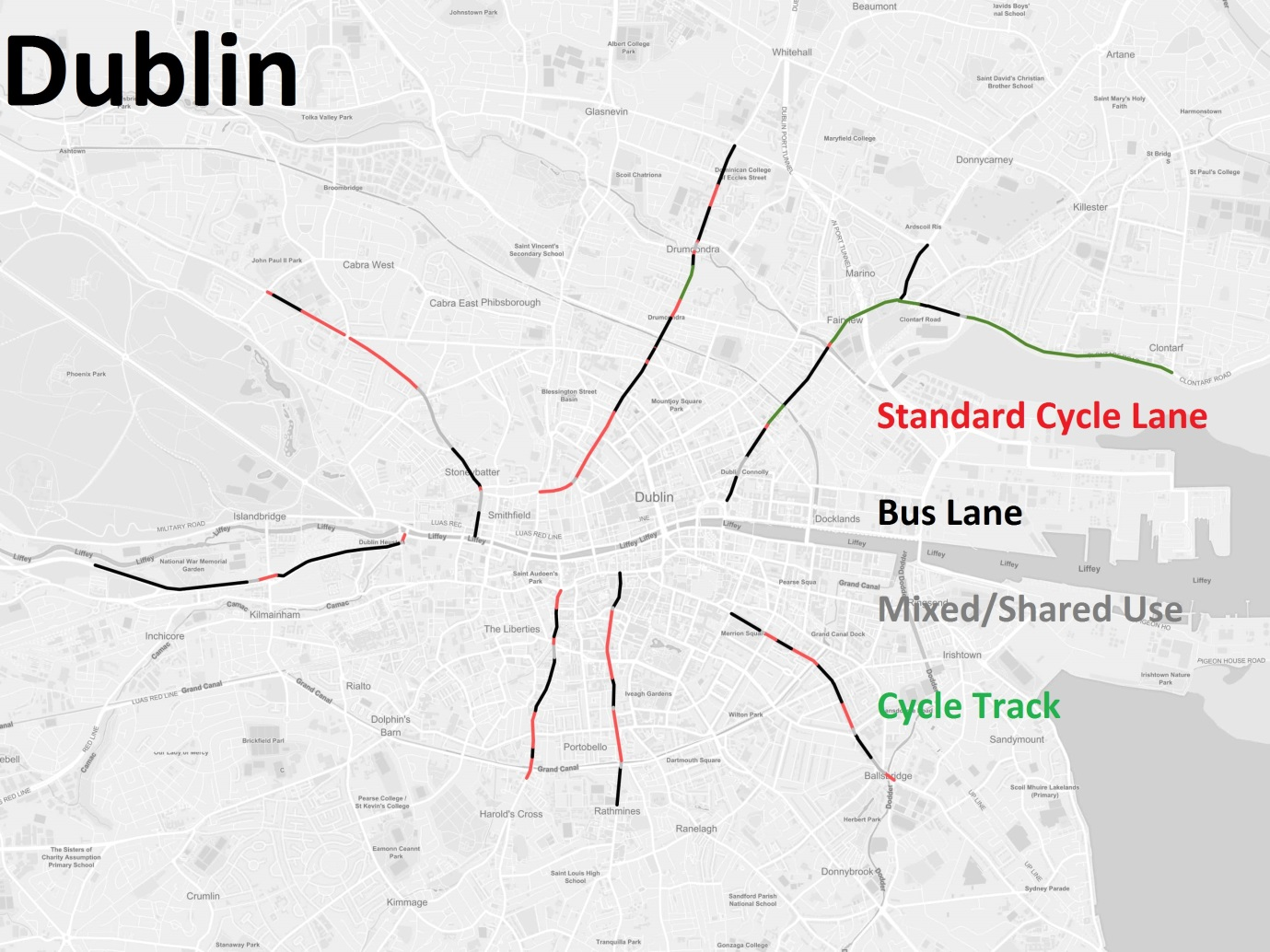 In Dublin, 26.7% of major commuter routes into the city centre were marked with standard (painted) cycle lanes, 48.7% of the routes were shared with bus lanes, 8.5% had no marking for either bus or cycle lane and were by definition shared use, and 16.1% were cycle tracks.

In Copenhagen, 11.6% of the major commuter routes were marked with standard (painted) cycle lanes, 0% were shared with bus lanes, 11.1% had no marking for either bus or cycle lane and were by definition shared use, and 77.2% were cycle tracks.

The partially implemented plans of the National Cycle Policy Framework and the Greater Dublin Area Cycle Network plan have produced partially fulfilled targets. While some of the objectives of the National Cycle Policy Framework have been met, including providing public bikes in cities (Dublinbikes) and supporting the provision of fiscal incentives to cycle (Bike to Work scheme), many more key objectives have not been achieved: providing cycle-friendly routes to all schools, adequate cycling parking facilities within schools, and cycling training to all school pupils; ensuring that all surfaces used by cyclists are maintained to a high standard and are well lit; providing secure parking for bikes and ensuring integration between cycling and public transport; and, most importantly, ensuring that the urban road infrastructure is designed/retrofitted to be cycle-friendly, and that traffic management measures are also cycle-friendly.

The sample of major arterial routes chosen in Dublin city may over-represent the quality of cycle links, in particular the amount of cycle tracks. The sample included a 2.3km section of coastal road which has one of only 4 major cycle track links in the city noted in the Greater Dublin Area Cycle Network survey, yet the inclusion of this route in the data accounted for most of the cycle track length 7. The study method does not allow for the representation of how different the cycle networks are in terms of their logic and continuity; for example, the difference in delays to cyclists caused by the prioritisation of motorised traffic at junctions, the quality of road markings, signage and signals, and discontinuity caused by illegal parking or time-allowed parking in cycling links.