PSA testing is widespread throughout Europe for diagnostic purposes and follow up. We performed a prospective outpatient cohort study of 250 men (2013-2015) in two hospital sites. Included were those men being followed up by urology with PSA blood testing. First appointments and those men in whom non-PSA tests were ordered by urology were excluded. The median age was 67.2yrs (46-88). Eighty-one point two percent of samples had a combination of 21 different serology tests at an added cost of >€18,000. Abnormal serology resulted in 53 referrals. Twenty-six-six percentof correspondence referenced abnormal serology other than PSA. Follow up of non-PSA test results poses a challenge in an outpatient setting with failure to appropriately follow-up on abnormal results, increased costs, and medico-legal implications. There is currently no Irish legislature in place to safeguard hospital physicians. This study quantifies the levels of expenditure, resources and risk associated with ambulant PSA testing.

Introduction
PSA testing is widespread throughout Europe within screened and non-screened populations for diagnosis and follow up purposes1. PSA testing is often carried out in Primary Care, both as a screening test and as a requirement prior to a patient’s attendance at their outpatients appointment. The PSA result supplied by the patient’s General Practitioner (GP) is often accompanied by other serology testing and it is commonly unclear if any abnormal results found amongst these tests have been previously addressed by the GP as there is usually no written documentation furnished to this effect. Follow up of non-PSA test results poses a challenge in an outpatient setting. A patient’s medical history is often limited by what is available within the patient’s hospital record or correspondence with Primary Care and other physicians. Furthermore the reliability of the patient’s record of events relating to Primary Care decision-making is speculative without written evidence. Addressing increased volumes of tests such as those added on by GPs can be time consuming and abnormal results place further pressures on an already strained outpatient department. This may result in failure to appropriately follow-up on abnormal results, increased costs, and medico-legal implications. What is also unclear is on whom the onus of responsibility lays. The aim of our study is to firstly quantify the number of test results being reviewed by a tertiary Urological facility, which they had not requested; secondly to determine what action was undertaken for abnormal results and thirdly to determine the cost to a public healthcare system of these unnecessary tests.

Methods
We carried out a prospective outpatient cohort study of 250 consecutive men (2013-2015) over two hospital sites. Inclusion criteria were those men who were being followed up by urology with PSA blood testing. Exclusion criteria included first appointments and those men in whom tests other than PSA were ordered by urology. Data was collected on what tests these men had carried out by their GP apart from the PSA as had been requested by the Urologist. These test results were then analysed to ascertain what proportion of these results were abnormal. Of those patients who were discovered to have an abnormal test result excluding PSA, a comprehensive chart review was carried out to examine if these results were addressed by communication firstly from the GP to the Urologist and secondly from the Urologist to the GP. We also attempted to determine which of these added tests were relevant given the patients history. Univariate and multivariate analyses were performed using SPSS v20© (IBM corporation).

Results
The total extra tests carried out by GPs amounted to 2427 tests, excluding PSA testing which amounted to 1182 in one hospital site and 1,245 in the other (See Table 1). The most commonly ordered tests were renal profile, of which there were 203 ordered and Full Blood Counts, of which there were 199. Notably there was a considerable number of unrequested tumour markers amongst the tests - HCG, AFP, CEA, CA19-9, none of which were abnormal (p<0.01). Each male had an average number of 8 added tests carried out. These extra tests add up to a total unnecessary cost of €18,275. 25% (63) of the tests carried out, excluding PSA, were appropriate given the patient’s medical history available in the hospital chart. 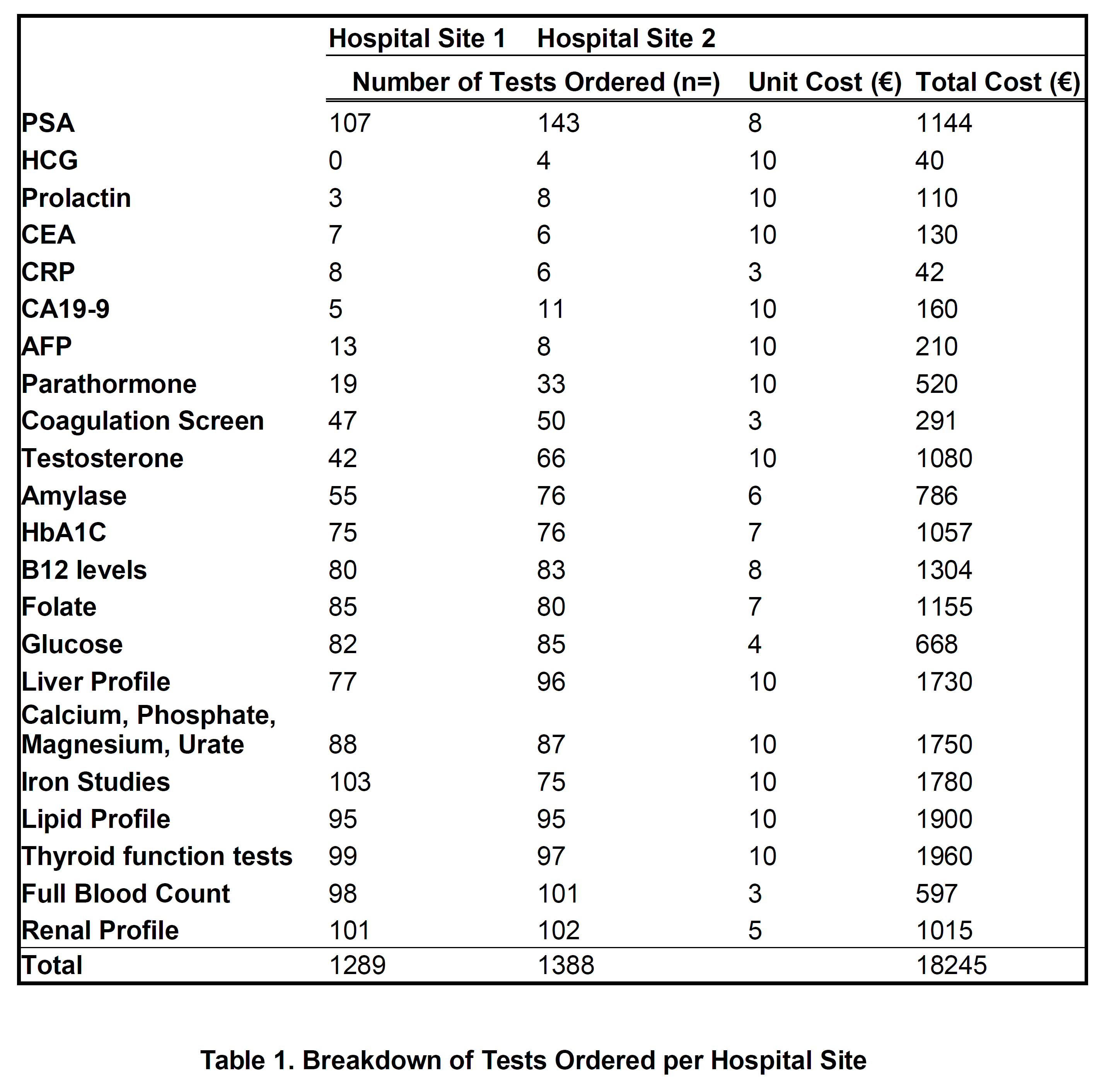 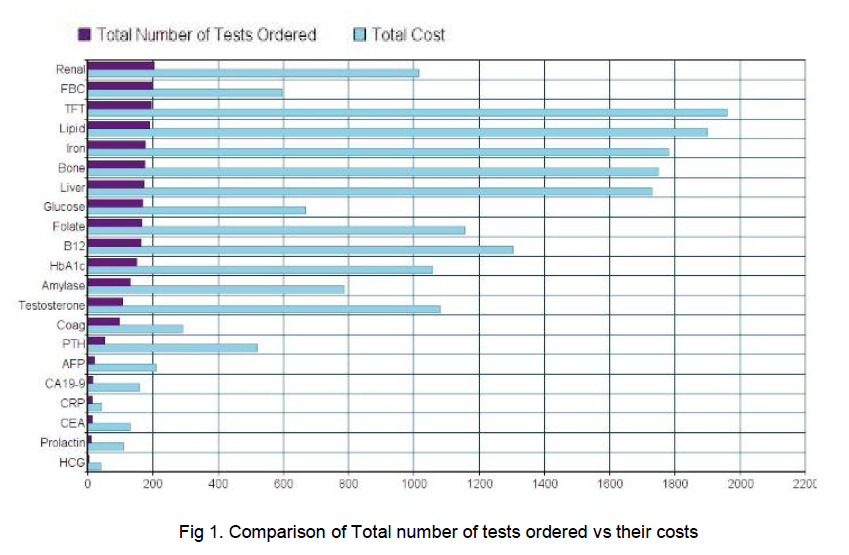 Out of the 250 men there were 91 abnormal tests identified, which constitutes 45%. Out of these 91 abnormal results, only 53 resulted in index referrals in the outpatients which means that 38 of these abnormal results were missed or ignored. The odds ratio that an intern or SHO would miss an abnormal result over a Registrar or Consultant was 1.6 (p<0.01). Additionally, only 1/4 of these tests were addressed in correspondence to GP. 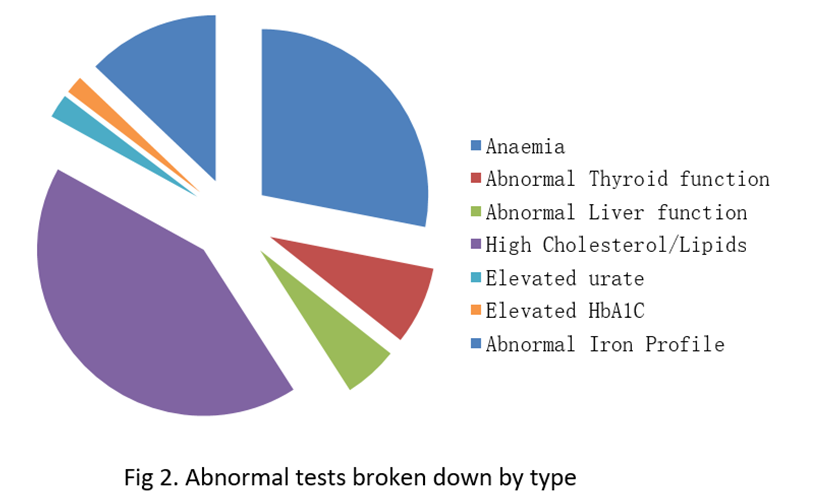 Discussion
There is a wide variation in rates reported of failure to follow up laboratory testing with a range of 6.8% to 62% reported in one systematic review2. The failure rate in this study exceeds this at approximately 75%. However it should be noted that the above systematic review considered failure of follow-up as the ordering physician neglecting to document actions relating to a test result, whereas this study deals with the failure to follow up laboratory tests by physicians who have not ordered those tests. It is common for Urological centres to request that GPs carry out PSA testing on a patient prior to an outpatient clinic review as this is often more convenient for the patient. However, many other tests are carried out simultaneously by the GP that have not been requested by the Urologist. The difficulty then for the Urologist when supplied with added test results, is choosing the correct action to take given the lack of context furnished with these results. An abnormal result may already have been dealt with by the GP but this is not a safe assumption to make.
The impact of missed test results can be significant. There is no data on any adverse outcomes which may have occurred as a result of the 91 abnormal results in this study. Studies report missed cancer diagnoses, hospitalisation for electrolyte abnormalities, or missed hypo/hyperthyroidism2. Gandhi et al reviewed closed medical malpractice cases and reported that 59% of diagnostic errors involved cancer as the main diagnosis, and attributed inappropriate or inadequate follow up to causing 48% of these missed cancer diagnoses3. Lending credence to these implications is that 25% of malpractice cases are due to failure in follow up according to a review by a large medical insurer4. Unfortunately these studies do not reference laboratory testing alone, the only issue addressed in our study. Therefore the extent to which this data can be applied to our results is limited. It nonetheless supports the conclusion that failure to follow up testing has significant implications for both the patient and the physician.

Gandhi et al also reported that communication factors contributed to 30% of missed or delayed diagnoses with 30% of these factors attributed to failing to establish clear lines of responsibility3. Communication plays a very important role in patient care and there is increased risk for litigation resulting from failing to notify test results4. Our analysis showed that communication between healthcare providers is an important issue in the cases examined. According to our results 203 men out of the 250 studied had test results which had not been requested by the Urologist. Additionally 25% of these tests were inappropriate or unnecessary based on the patients’ medical history available in the patients hospital chart. These tests may have been warranted, but a lack of communication can leave the tertiary physician exposed. Of the 91 abnormal test results discovered, no communication was forthcoming from the GP as to whether these test results had been addressed. This is a major issue for the reviewing physician in the outpatients department, as some results may require referrals to other medical sub-specialties. It is not feasible, nor is it appropriate for a tertiary physician to co-ordinate a patient’s overall medical care outside their specialty. Our results also demonstrate that only 26% of letters to GPs address these abnormal results. In addition, it is not possible to identify to what extent patients are aware of tests being carried out or indeed if they had been counselled regarding their implications. In a study by Woolf et al errors or failure of communication comprised 80% of proximal errors in cascade events (i.e. those events which occurred due to multiple concurrent errors,) known as the Swiss cheese model5,6. Communication errors in this study were directly responsible for 63% of incidents reported by Primary Care providers and of the 64 communication errors made; 12% were due to inaccessible medical records5. This is applicable to this study as neither the GP nor the Urologist had access to the others records on any particular patient.

The high rate of failure to follow up in this study can likely be attributed to the assumption that responsibility for test results lies on the physician who ordered the tests. Within the Irish Statute Book, there is no enacted legislation with regard to who bears the responsibility for test results and any subsequent appropriate action required. This is also not addressed in the Guide to Professional Conduct and Ethics drawn up by the Irish Medical Council, the main set of guidelines available for physicians in Ireland7. The use of Clinical Practice guidelines in medicine is low and a numbers of barriers to guideline uptake have been identified, the main being a lack of agreement by the physician with the guidelines associated with a lack of applicability or evidence8,9,10. Another review postulated that guidelines may be seen by physicians as interfering with their clinical decision making and autonomy9. It also raised the issue that inflexible guidelines may make it difficult to treat patients with a non-classic presentation of illness9. While these are valid points against their use, clinical guidelines can provide clarity on the most appropriate action to be taken and which interventions are of proven benefit9. Guidelines can also serve to reduce medical error and in the setting of a tertiary referral centre, would serve to clarify the action required to be taken by the physician with regard to results which they themselves had not requested11.

Finally, an issue which requires clarification is the responsibility a patient has for following up on his or her own test results. A panel held by Medisec, a GP indemnity insurer, advised that an informed patient had a responsibility to follow up on their own test results. However, it did acknowledge that there should be protocols in place for reviewing and following up on a patient’s results12. This sentiment on a patient’s role in their own follow up was echoed by Callen et al and an observational study by Unruh et al actually concluded that patients play a significant role in detecting and preventing medical errors in an outpatient setting2,13.

There are multiple factors contributing toward missed test results such as a lack of guidelines related to test management, lack of a central or integrated database and the need of the patient to acknowledge their role in follow up. Upon a review of the literature our study appears to be the only that deals with this contentious issue. This study addresses many issues, such as the significant added cost to our healthcare system of these added tests, and of the need for better communication systems between primary and tertiary care. The central tenet however, is on whom the responsibility for follow up lies. Not following up on an abnormal test results has been shown to have significant detrimental effects on patient care. Guidelines would provide physicians with clarity of what actions need to be taken on test results; a central database of results or even patient notes could reduce the amount of error induced by miscommunication and lack of context. Finally the patient should be enabled to manage their own medical care as it has been shown that they can be a valuable asset in reducing medical error.