Therapeutic hypothermia is now the standard of care for infants with moderate to severe hypoxic ischaemic encephalopathy. Sixty-three infants received therapeutic hypothermia at Cork University Maternity Hospital (CUMH) from 2010-2014. Median gestational age was 40 weeks. Eighteen (29%) infants were Sarnat grade 3, 41(65%) grade 2 and 4(6%) grade 1. Nineteen outborn infants arrived in CUMH at a median (IQR) age of 310 (270, 420) minutes. Four (21%) outborn infants were within the target temperature range on arrival. Median (IQR) time (minutes) from birth to achieve target temperature was 136 (90, 195) for inborn and 300 (240, 360) for outborn infants (p <.01). Overall, 35 (56%) infants had electrical seizures, 42 (74%) had a normal MRI at a median (IQR) age of 7(6,9) days and the median(IQR) length of stay was 9 (7,11) days. Although no difference in seizures or MRI findings was seen, passive cooling does not achieve consistent temperature control for outborn infants.

Therapeutic hypothermia is now the standard of care for newborn infants who develop moderate to severe hypoxic ischaemic encephalopathy (HIE).1 Animal models demonstrated that hypothermia can ameliorate the secondary cascade of neuronal cell death that occurs following a hypoxic ischaemic event.2 A 2013 Cochrane meta-analysis of eleven randomised controlled clinical trials confirmed that reducing an infant’s core temperature to 33-34°C within six hours of birth, for a period of 72 hours, will reduce the rates of death [RR 0.75 (CI 0.64-0.88)] and disability [RR 0.77 (0.63-0.94)] amongst survivors.3 There is therefore a potential six hour “window of opportunity” for commencing cooling. Therapeutic hypothermia is provided at four tertiary neonatal centres in Ireland, three based in Dublin and one in Cork. In accordance with international recommendations, infants born outside of these centres who may benefit from therapeutic hypothermia are transported postnatally to one of these centres. The current National Neonatal Transport Programme (NNTP) guideline recommends that infants are passively cooled until they arrive at the tertiary unit, where active servo-controlled cooling commences.4

The aims of this project are to 1) describe the clinical details of infants receiving therapeutic hypothermia at CUMH from January 2010 to December 2014 2) describe transport, temperature management and short term outcomes and 3) compare inborn with outborn infants. Infants were identified from the neonatal electronic database and hospital annual reports. A retrospective review of their medical charts was performed. Data collected included birthplace, birth history, temperature management, transport details, neonatal history, and biochemical results. Temperature management details included evidence of temperature monitoring during transport, temperature on arrival and total time (from birth) to attain the target temperature of 34°C. The Tecotherm Neo (Inspiration Healthcare, Leicester, UK) servo-controlled cooling mattress was used for all infants. Short term outcomes included electrical seizures, MRI findings, length of stay and survival to discharge.  All infants had continuous multi- channel EEG/aEEG. Only electrical seizures were included. These are defined as sudden evolving repetitive stereotypical waveforms lasting at least 10 seconds. Seizures were identified by both the neonatal staff and a dedicated neurophysiology research team. MRIs were graded as normal or abnormal and the patterns of injury reported. 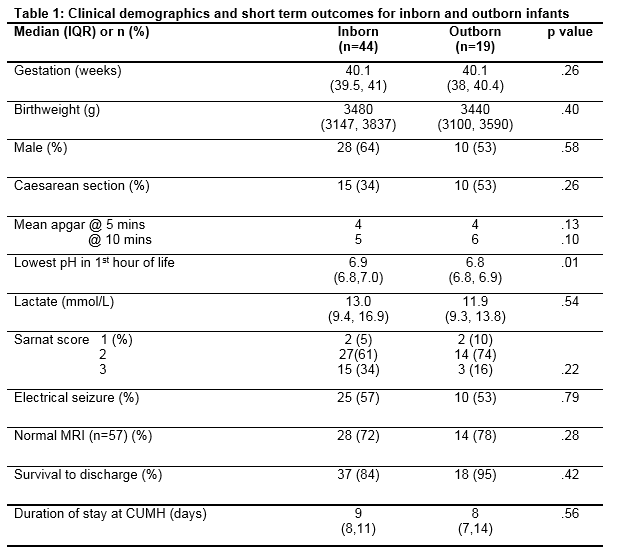 Sixty-three infants were treated with hypothermia, 44 inborn and 19 outborn. Clinical demographics are outlined in Table 1. There were four infants born at 36 weeks’ gestation. Four (6%) infants were classified as Sarnat grade 1, 41 (65%) as Sarnat grade 2 and 18 (29%) Sarnat grade 3. There were 25 (40%) infants delivered by caesarean section. Outborn infants had marginally lower pH of 6.8 vs 6.9 (p value .01) but no difference in lactate values was noted. Diagnoses in addition to HIE included one infant with each of the following subsequent diagnoses: peroxisomal disorder, infantile epileptic encephalopathy, possible meningitis, and a thoracic teratoma. One infant developed a bowel perforation on day 4 requiring transfer for surgery. One infant required transfer for ECMO therapy. 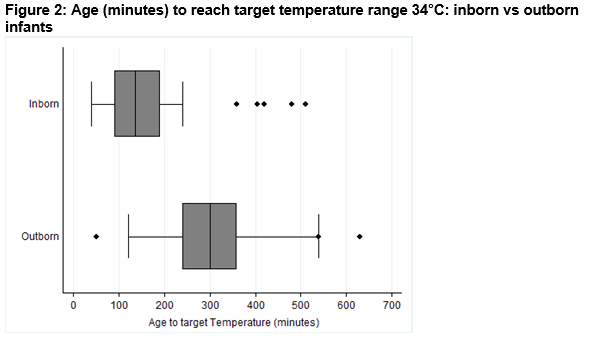 Thirty-five (56%) infants developed electrical seizures. Forty-three infants received anticonvulsants. Twenty-eight received phenobarbitone only and 15 received two or more medications. Eight infants died (seven inborn and one outborn). Six of these eight did not have an MRI. The remaining 57 infants underwent MRI on median day of life 7(6, 9). Forty-two (74%) infants had a normal MRI scan. In the 15 infants (7 Sarnat grade 3) with an abnormal MRI scan the pattern of injury was: bilateral deep nuclear gray matter (DNGM) (7), mixed pattern of DNGM, cortical and white matter (2), focal white matter or cortical involvement only (3), unilateral caudate haemorrhage (1). One infant had polymicrogyria consistent with a peroxisomal disorder. The infant who required ECMO had a small focal parietal cortical and white matter infarction that is likely to be an embolic complication of ECMO.

During the study period 42,636 infants were born in Cork and 44 infants were cooled (inborn cooling rate 1:1000). The rate from the local referring centres appears lower but these units may also be transferring infants to Dublin. The standard cooling criteria, adopted from the clinical trials, appear to be adhered to and certainly no infant less than 36 weeks was cooled. The Sarnat grade 2 and grade 3 ratio of 2-3:1 is as expected although there was a trend towards lower Sarnat grades in the outborn infants. Four babies were retrospectively reclassified as Sarnat grade 1. The decision to cool is made as soon as possible after birth, and some babies initially assessed as moderate encephalopathy will quickly improve and be reclassified to grade 1. This reflects the reality of the urgency of clinical decision making in this condition relative to the window of opportunity for neuroprotective intervention. There was no difference between inborn and outborn infants in relation to clinical demographics, apgars, Sarnat grade, seizures, MRI results or length of stay. A statistical but probably not clinically significant difference in the lowest pH was observed in the first hour but there was no difference in lactate (Table 1). Significant differences were observed in the temperature management that outborn infants received. Even if one allowed a temperature range of 32.5 – 34.5°C, nine (47%) infants would still be outside this range. Therefore some babies are not cooling down effectively, while some are reaching potentially unsafe lower temperatures.

Despite the difference in temperature management, no difference in outcomes was shown in this study. The rate of normal MRI brain (74%) pre discharge from hospital is higher than reported from the randomised trials.5,6 Whether this may be related to therapeutic creep (infants with milder degrees of encephalopathy being cooled), the timing of imaging or the beneficial effect of cooling is uncertain. The MRI scans are performed on day (median, IQR) 7 (6, 9) and reported by paediatric radiologists. The optimum timing of an early MRI scan using diffusion weighted imaging is 24 -96 hours after birth. Later scans using conventional T1 / T2 weighted imaging should be performed at 7 – 21 days. We perform diffusion weighted and conventional T1 and T2 sequences in a single scan. We are not aware of any centre that is currently routinely performing both an early and a later scan in these infants. Outborn infants require stabilisation, consideration of eligibility for therapeutic hypothermia and ambulance transfer. When therapeutic hypothermia was initially introduced there were concerns about safety of active non-servo controlled cooling during transport, and issues around commencing active cooling in a centre that may only do so once or twice per year. This led to recommendations for passive cooling on transport. Many international neonatal transport services have published their experience of cooling during transport.7-9 All demonstrate similar variation in temperature control with passive cooling, and that servo-controlled cooling during transport is feasible, more effective and potentially safer. Chaudary et al also showed a reduced time to arrival at the cooling centre using “active servo control” during transport. Using servo temperature control, at the local hospital and during transport, would potentially alleviate the current time pressure associated with transporting these infants, thus allowing paediatricians to refocus their attention on the conventional aspects of cardio-respiratory stabilisation and central vascular access. The cost of equipment (the cooling blanket) should not be a factor in this high risk population and training of local medical and nursing staff can be provided by the tertiary neonatal units.

Protocols from the randomised trials advised that cooling be “commenced” within 6 hours of birth, as distinct from achieving the target temperature within 6 hours. In clinical practice cooling is commenced as early as possible. We remain uncertain if earlier cooling is beneficial. The TOBY trial showed a trend towards better outcomes in infants when cooling was commenced at less than 4 hours.10 The NICHD trial showed no difference in outcomes between inborn (cooled at 4 hours) and outborn infants (cooled at 5 hours).11 However, what is clear from animal histological data is that there is no benefit in delaying the start of cooling.2 There are many challenges associated with transport of these unstable infants, including how and when to commence therapeutic hypothermia, and how to maintain it during transport. We recommend active servo-controlled cooling for all infants during transport and consideration be given to using servo-controlled cooling at the place of birth whilst awaiting transfer.

9. Hallberg B, Olson L, Bartocci M, Edqvist I, Blennow M. Passive induction of hypothermia during transport of asphyxiated infants: a risk of over cooling. Acta Paediatr 2009; 98: 942-6.