Scaphoid fractures are the most common carpal bone fracture. Up to 40% of scaphoid fractures can be missed at initial presentation and investigation. Follow-up plain film radiograph has overall poor sensitivity and reliability. MRI has been shown to have an almost 100% sensitivity and specificity and so is the gold standard in scaphoid fracture diagnosis. Additionally, early specialist involvement is recommended. We proposed that following a designated pathway, there would be no significant increase in MRI requests. Following implementation of a pathway for the management of suspected scaphoid fractures in St James’s Hospital in 2012 re-auditing demonstrated that management changed to either MRI directly after initial x-ray (16/145, 11%), MRI after second x-ray (9/28, 32%) or orthopaedic follow-up (19/28, 68%). The number of MRIs requested was consistent with our predictors of demand. Thus, our new protocol maximises diagnostics, cost effectiveness and quality of patient care.

Scaphoid fractures are the most common carpal bone fracture1. Up to 40% of scaphoid fractures can be missed at initial presentation and investigation2, and therefore further imaging is essential if scaphoid fracture is suspected. Follow-up plain film radiograph has overall poor sensitivity and reliability3 and so cannot be a standard for definitive diagnosis. Magnetic Resonance Imaging (MRI) is regarded as the investigation of choice in the clinically suspected scaphoid fracture after negative initial and 7-10 day follow up x rays4 and the American College of Radiologists recommends it as the first-choice, second-line investigation5. MRI has been shown to have an almost 100% sensitivity and specificity and so would be the gold standard in scaphoid fracture diagnosis6,7. While the hospital costs may increase with MRI, the non-hospital costs have been shown to significantly decrease8. Early MRI (within 1 to 6 days of initial negative radiographs) has also demonstrated cost effectiveness when compared with the standard management protocol of prolonged immobilisation and repeated outpatient assessment9. However, there are currently issues with the availability of MRI due to resource implications. Other modes of imaging that can be used as a low cost alternative include computed tomography (CT) scanning of the wrist. However, it has a lower sensitivity than NMIBS and difficulties with its interpretation restrict its specificity10. In our institution, minor injuries, such as suspected scaphoid fractures are predominantly seen by advanced nurse practitioners during day time hours. Current management in our hospital was for all patients with a suspected scaphoid fracture and negative initial x-ray to have a follow-up radiograph taken at 7-10 days. If scaphoid injury is still suspected and the second x-ray is negative an NM Isotope Bone Scan (NMIBS) was performed. The sensitivity of NMIBS approaches 100% however, a poor specificity gives false positive results in 25%10. We audited our hospitals initial and follow-up imaging for suspected scaphoid fracture. After discussions with diagnostic imaging and review of our data, we introduced a new protocol in our institution which hoped to maximise diagnostics, cost effectiveness and quality of patient care. We proposed that following the agreed protocol would not result in a significant number of increased MRI scan requests as compared to NMIBS.

The results for cycle A are shown in Figure 1. There were 92 initial scaphoid x-rays ordered in cycle A (n=92). Thirty-three (36%) had a fracture seen at first x-ray and of these, 16 were scaphoid fractures. Fifty-nine had no fracture identified at first x-ray (59/92, 64%) and of these, 36 were discharged without follow-up in our institution. Twenty-three patients received a second scaphoid series x-ray. The median follow up of second x-ray was 10 days. Two patients had a fracture identified at second x-ray (2/23). Of those with no fracture, 3/21 (14%) were sent to orthopaedic clinic for follow-up. Seven patients had a third x-ray carried out prior to discharge (7/21, 33%), 11/21 (52%) had NMIBS carried out and 2/11 (18%) required an MRI after the NMIBS. Eleven NMIBS carried out in a 5 month period in 2011 was used as a predictor of demand for MRI Imaging. 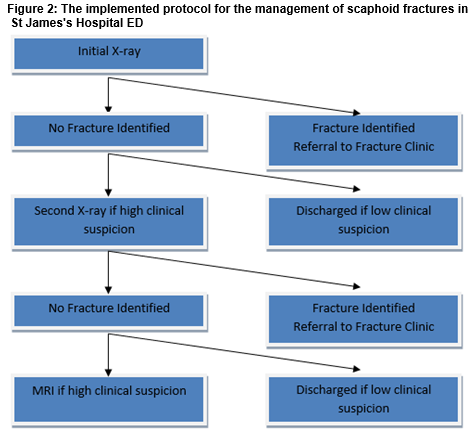 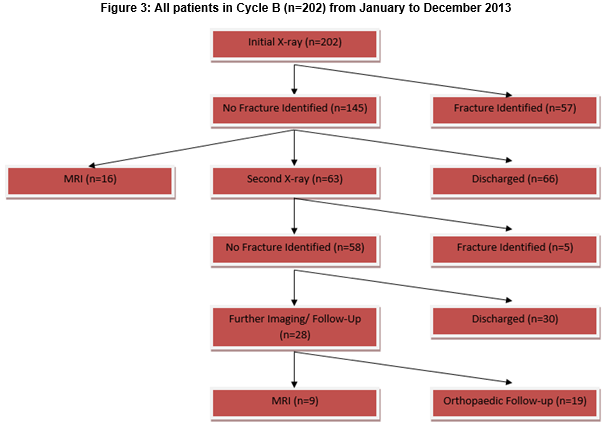 There is a wealth of evidence showing superiority of MRI versus NMIBS in the diagnosis of radiographically occult scaphoid fracture. This is based on the much higher specificity of MRI given the similar sensitivities of the two. As reflected by two patients in Cycle A, MRI is sometimes indicated to confirm or out-rule a scaphoid fracture in an ambiguous NMIBS result. By making MRI scanning the first choice, second line investigation in our institution this would have saved time and money as the NMIBS was suboptimal. Also, it would have saved those patients from an unnecessary dose of radiation. A protocol driven service always ensures that patients receive the highest quality of service and in theory, that no patient is lost to follow-up. As shown from the results of Cycle A only a small number of MRI's would be required in a scaphoid management pathway and thus, it would be acceptable to introduce a protocol which incorporates MRI when scaphoid fracture is suspected and two negative x-rays are present. The second cycle proves the effectiveness of such a protocol however, the exact timing of the MRI must be considered. Sixteen early MRI's were carried in the second cycle. These were completed as a follow-up investigation instead of a repeat plain film radiograph. This gave a definitive early diagnosis and prevented over treatment of patients if second x-ray was inconclusive. Previous work has shown that early MRI changes management in over 90% of cases6 and thus prevents over or under treatment of injuries.

The College of Emergency Medicine guidelines state that MRI should be the second line investigation of choice in clinically suspected scaphoid fractures12. Additionally, early MRI has been shown to be cost effective9. This may an alternative management option in our institution in the future. Nine out of sixteen (56%) had no fracture present at early MRI and so this group were prevented from unnecessary and prolonged immobilisation. The ordering of these MRIs deviated from the protocol set in cycle B and was due to local arrangements with the MRI department and individual patient factors. The diagnostic imaging department were happy to deviate from the protocol as pre-existing fears that the number of MRI requests would be significantly increased proved unfounded. Despite its proven benefits it would be impractical to carry out early MRI on all patients in our institution without further resources and financial support. Thus, as a compromise we will continue with the delayed MRI request after second negative x-ray when clinical suspicion remains, and if any physicians have serious concerns they can be sent for early orthopaedic specialist review. Shetty at al had previously recommended patients with a painful wrist following an injury and a negative radiograph should be referred early to an appropriate clinician13. During the first cycle only 3/21 (14%) were sent for orthopaedic follow-up after a second negative x-ray. This increased significantly in the second cycle with 19/28 (68%) (p<0.001) being sent for orthopaedic follow-up and the remainder 9/28 (32%) having an MRI organised by the emergency department. While the number of orthopaedic referrals increased prior to fracture identification between the first and second cycle the evidence suggests that this reduces unnecessary immobilisation and over treatment. This should be regarded as a positive improvement within the department as either a diagnosis was obtained via MRI scan of the wrist or a specialist involvement was sought. In the first Cycle, 35% of patients had follow-up plain film radiographs carried out inside the desired window (Range 7-16 days, Median 10 days). This follow-up x-ray window is based on the premise that decalcification on either side of the fracture line would render any fracture visible on the subsequent radiographs11.

Thus, too early an x-ray may not allow this decalcification to fully occur and too late an x-ray would leave a patient immobilised unnecessarily for a longer period. During the second cycle the average time from first to second x-ray was 10.6 days and the median 10 days. Forty-six percent had their follow-up x-ray in the specified time however, this wasn't significantly better than the first cycle (p=0.36). This needs to be addressed within the department to optimise patient care and re-audited at a later date. As demonstrated from this audit, there is an overall relatively low number of MRI's required in scaphoid fracture diagnosis in our hospital in a single year using the protocol given in Figure 2. Thus, even though St James's Hospital is one the largest and busiest tertiary referral centres in Ireland it is feasible to introduce MRI as the first choice, next line investigation in cases of a negative second x-ray. This very sensitive, very specific test would reduce the risk of under treatment to the patient and hopefully reduce the financial burden to society of overtreatment of patients. We would additionally leave orthopaedic referral to the treating physician’s discretion and level of concern.

The hard work and dedication of the advanced nurse Practitioners in the emergency department, without whom, this service would fail to run.

5. American College of Radiologists Practice Guidelines for the performance of magnetic resonance imaging (MRI) of the wrist (2007).

12. Guidelines for the management of clinically suspected scaphoid fractures in the emergency department, p5, College of Emergency Medicine, September 2013.