Myasthenia Gravis (MG) is a disorder affecting components of the neuromuscular junction. Epidemiological studies show rising incidence and prevalence rates. The aim of this study was to determine the incidence and prevalence of MG in the Republic of Ireland. Data sources included patient lists from consultant neurologists and ophthalmologists, a neuroimmunology laboratory, general practitioners and the Myasthenia Gravis Association. A total of 1,715 cases were identified, of which 706 definite, probable or possible autoimmune and congenital MG cases were included. The overall prevalence rate from the data obtained is 15.38/100,000. The study demonstrated a female preponderance (female:male of 1.3: 1) and some geographical variation within Ireland. The average incidence rate for the years 2000 to 2009 was 11.3 per year; the rate for the current decade is 18 per year. The increasing number of diagnoses may be due to improved access to diagnostic investigations and increasing awareness of the clinical manifestations.

Myasthenia Gravis (MG) can be categorised into autoimmune and congenital myasthenic syndromes. Both syndromes affect components of the neuromuscular junction and are characterised by fatigable weakness of skeletal muscles. Eighty-six per cent of patients with autoimmune MG initially present with ocular symptoms and, of these, up to 90% may develop generalised MG within three years.1 Autoimmune MG can occur at any age, but there tends to be a bimodal distribution to the age of onset with an early peak in the second and third decades (female preponderance) and a late peak in the sixth to eighth decade (male preponderance).2 Clinical manifestations of autoimmune MG arise from poor postsynaptic muscle stimulation due to the presence of autoantibodies. Diagnostic investigations include serology for acetylcholine receptor antibodies (AChR-Ab), muscle-specific kinase antibodies (MuSK-Ab) and anti-striated muscle antibodies, single fibre electromyogram, Tensilon testing and thymic imaging. AChR antibodies are detected in approximately 85% of generalised MG and 50% of ocular MG patients.3 Among seronegative generalised MG patients, rates of MuSK-Ab positivity vary considerably worldwide from 0% in Norway to 49% in one Turkish study.4 The frequency of MuSK MG decreases with increasing distance from the Equator.4 Thymic abnormalities are found in over 80% of AChR-Ab positive patients with generalised MG.5 Thymoma occurs in 15% of cases and thymic hyperplasia is common in early onset MG.6 European epidemiological studies from the 1980s demonstrated a significant increase in annual incidence rates of MG. This is thought to be attributable to improved case recognition, particularly in the elderly population.7 Diagnosis remains problematic due to the nonspecific and often fluctuating symptoms. MG may be misdiagnosed as Guillain-Barre syndrome, multiple sclerosis, amyotrophic lateral sclerosis or even as an anxiety disorder.

The aim of this study was to determine the incidence and prevalence of MG in the Republic of Ireland (ROI). Ethical approval for this study was obtained from the Ethics and Medical Research Committee of St Vincent’s University Hospital (SVUH). Sources of data included patient lists from consultant neurologists and ophthalmologists, the neuroimmunology laboratory in Oxford where all samples for AChR-Ab testing from the ROI are sent, general practitioners (GPs) and the Myasthenia Gravis Association (MGA). Neurology and ophthalmology consultants in the ROI were contacted and asked to provide their myasthenic patients with the research nurse’s contact details (opt-in trial design). The neuroimmunology laboratory provided AChR-Ab databases dating from 1982 to 2012. The GPs of consenting patients were also contacted. The MGA provided basic demographic information for their consenting members. MGA members and patients who contacted the research nurse were sent a research questionnaire in the post. The questionnaire contained questions relating to basic demographics, family history of autoimmune conditions, initial and current symptoms, date and place of diagnosis, investigations, current and previous medication, co-existing diagnoses and thymectomy history. A website (www.mgireland.com) was established, providing an option to answer the questionnaire online. In 2012, posters detailing the study were distributed to neurology departments. 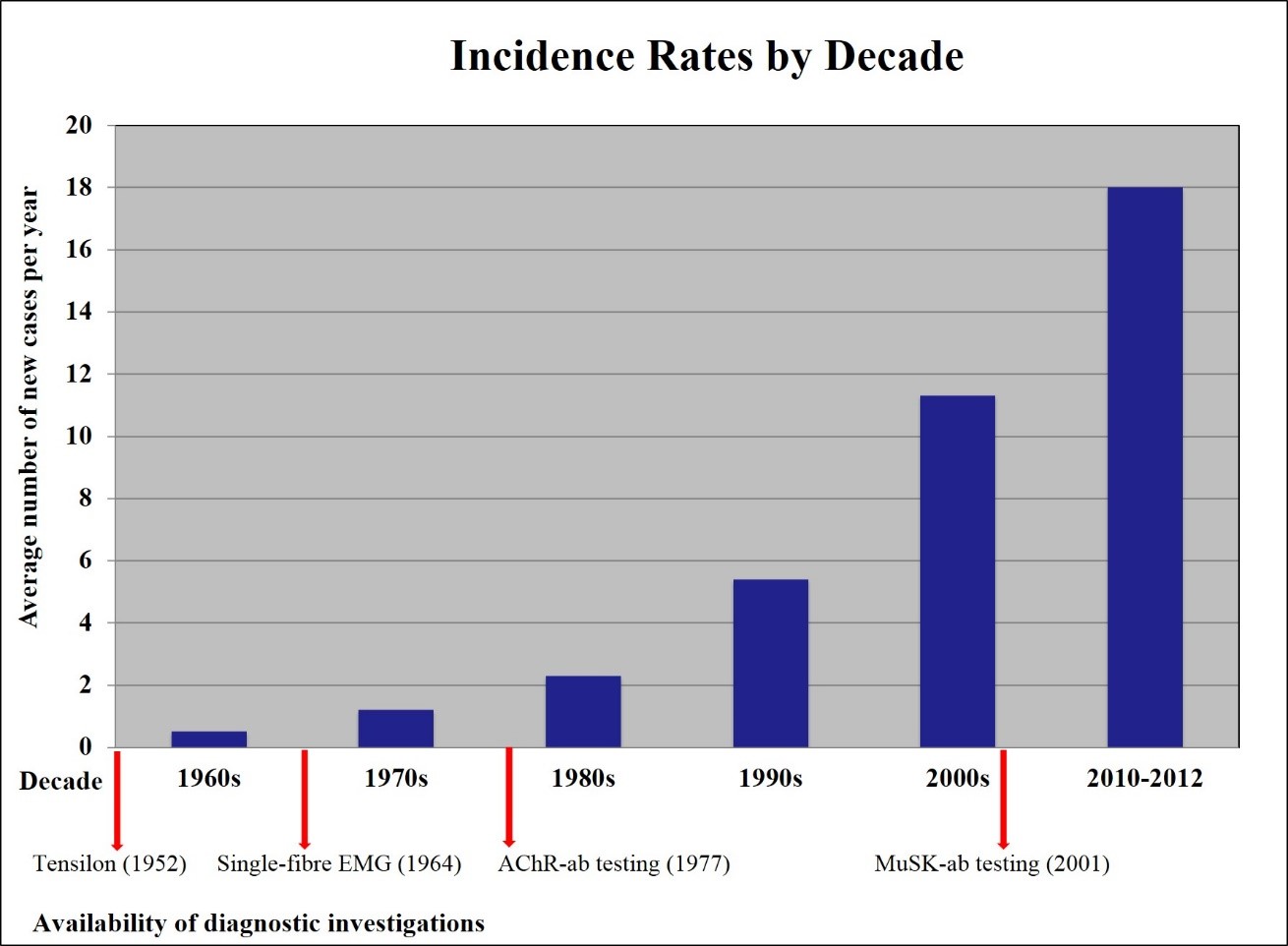 A total of 30 neurologists and 145 GPs were contacted with response rates of 53.3% and 45.5% respectively. Four ophthalmologists also responded. The Oxford neuroimmunology laboratory provided two databases, containing cases of AChR-Ab positive and negative patients from Irish hospitals, dating from 1982 to 2012. Those with negative AChR-Ab, duplicate names and those from non-ROI hospitals were excluded. The laboratory provided us with a total of 453 cases, 146 of which overlapped with previously sourced patients. Three hundred and fifty-seven cases were obtained from the MGA and 86 cases were recruited directly from the SVUH MG clinic. A neuromuscular research team provided another 176 cases. A total of 1,715 cases were obtained, of which 706 definite, probable or possible autoimmune and congenital MG cases were included in the study. A considerable number of cases (1,009) were excluded. Excluded cases were those with alternative diagnoses, duplicate cases, negative AChR-Ab with insufficient clinical information, cases from non-ROI hospitals, those known to be deceased and those with dates of birth dating from the early 1900s. Cases were categorised based on the diagnostic criteria developed by Carr et al.8 Definite cases are defined as those with a consistent clinical picture and one positive diagnostic investigation. Probable cases included those with an equivocal clinical picture and a positive diagnostic test. Cases with information insufficient to meet these criteria were categorised based on their source (Table 1). Gender was documented in 685 cases with a gender ratio of female:male of 1.3: 1. Geographical distribution of cases was categorised by province and based on the home address of the participant. This information was available in only 392/706 (55.5%) cases as certain sources did not provide this information.

The study demonstrated an uneven geographical distribution of cases across Ireland. Leinster’s population was 2,504,814 as of April 20119. Two hundred and forty-eight cases were identified within Leinster giving the province a prevalence rate of 9.9 per 100,000. Ulster’s prevalence rate is 4.7. Munster and Connacht have prevalence rates of 7.9 and 5.7 respectively. The overall prevalence rate for the ROI on the data obtained is 15.38/100,000. This is higher than the individual prevalence rates in any of the provinces because of the missing address data. Participant age at onset of symptoms was recorded in 218 cases and divided into decades, as shown in Figure 1. A female predominance was noted in early onset MG, equal gender distribution in the 5th, 6th and 8th decades, with a male predominance seen in the 7th decade of life. There is a bi-modal distribution in the age of onset with equal numbers of early and late onset MG. The average incidence rate in the years 2000 – 2009 was 11.3 new cases per year; the rate for the present decade is 18 new cases per year (Figure 2). Eighteen percent of participants were diagnosed between 2010 and 2012, 44% were diagnosed between 2000 and 2009, 21% were diagnosed in the 1990’s and 9% in the 80’s, 4.7% in the 70’s, 2% in the 60’s, 0% in the 50’s and 0.8% claim to have been diagnosed in the 40’s. Information regarding initial symptoms was available for 214 cases (Table 2). Eighty-six per cent of patients reported ocular symptoms at onset, either alone or associated with non-ocular symptoms. Similar rates were described in a study of 2000 MG patients.10 The most common current symptoms reported were mixed ocular and non-ocular symptoms (such as ptosis with fatigue).

Trends in bi-modal age of onset are well supported in the literature2 but there is evidence of an increasing incidence of late onset MG11,12, with the incidence of early onset MG remaining stable.11 Female predominance is also described in the literature. A female:male ratio of 2: 1 was found in an epidemiological study in England13 whilst a recent Northern Irish epidemiological study found a female:male ratio of 1.1: 1.14 The varying geographical distribution of MG cases may be due to genetic and environmental factors increasing the risk of the development of disease. D’Alessandro et al.15 examined two Italian provinces and found a significantly higher prevalence rate in Ferrara compared to Bologna. The study claimed no methodological, racial or socio-economic differences between study regions and reasoned that other aetiological factors, probably environmental, must play a part.15 Epidemiological studies in other countries have demonstrated higher rates of MG in urban areas.16 In our study, the higher prevalence rate in the more urbanised province of Leinster may be indicative of undetermined urban risk factors for MG or a genetic clustering. However, it is more likely due to ascertainment bias, whereby those living in urban areas may be more likely to attend neurology outpatients and be linked in with the MGA. Those living in more rural areas may be less likely to seek medical attention and therefore remain undiagnosed.

Additionally, Ireland has the lowest number of consultant neurologists per capita in Europe and 38% of patients wait more than twelve months for a neurology out-patients appointment.17 The recent Northern Irish (NI) epidemiological study demonstrated a prevalence rate of 20.7 per 100,000.14 Due to the geographical proximity and genetic similarity, we expected to find a similar prevalence rate. Based on the NI figures, we expected to obtain approximately 931 cases with a prevalence of 20.3. Our prevalence rate was, in fact, 15.4/100,000 (706 cases). This is probably an under-representation related to difficulties in case ascertainment. Neurology consultants were invited to suggest involvement in the study to patients attending their clinics; this relied on patients making contact with the research nurse. We did not utilise neurophysiology databases which could have provided us with additional cases. Information collected from cases included basic demographics, socioeconomic status, initial and current symptoms, age at onset and thymectomy history. However, fully completed details were only obtained in 229/706 (32.4%) cases. This affected the accuracy of categorising patients and meant that comparisons of certain details involved small sample numbers. Patients were categorised by province based on current home address, which may not have been their address at the time of diagnosis. Our data shows increasing incidence rates of MG in the ROI over the last sixty years and particularly over the past few years. The increasing number of diagnoses may be due to improved diagnostic investigations (Figure 2) with increased awareness and recognition of the clinical manifestations, particularly in the elderly population.12

A large systematic review of epidemiological studies showed increasing frequency of MG with year of study and improved study quality. This most likely reflects improved case ascertainment but other factors must also influence disease onset resulting in the variation in incidence rates across geographically and genetically similar populations.2 Outpatient departments are becoming busier as our population grows. Myasthenic patients are often referred to ENT surgeons, psychiatrists, rheumatologists or respiratory physicians which may delay diagnosis and treatment. Multi-centre collaboration is required to obtain more accurate numbers of myasthenic patients living in the ROI. Increasing awareness among physicians may help to increase recognition of this disease, particularly in elderly patients. Improved efficiency in diagnosis will lead to more timely management of this treatable disorder.

The neurologists in Republic of Ireland and Northern Ireland, particularly A Carr, S Lefter and A Ryan; the neuromuscular research team in Cork, the Myasthenia Gravis Association of Ireland, A Vincent’s neuroimmunology lab in Oxford, GPs in Ireland and the people with myasthenia gravis who took part in this study.