There is little published data on cycling injuries in Ireland and the present study aims to describe the cycling related injuries presenting to the emergency department (ED), of a tertiary urban university hospital. This is a retrospective review of cycling-related injuries presenting to the ED of St.  Vincent’s University Hospital (SVUH) from 1st of January to 31st of December 2014. There were 534 cycling related injuries presenting to the ED during the study period. Just over 71% of the patients were male, and 14.8% of patients presented following a collision with a motor vehicle. Forty patients required admission to hospital following their injury with 6 of these patients spending time in the intensive care unit. Cycling is now a very popular means of transport and exercise activity in Ireland and using hospital based data, it is possible that EDs may provide a vector for guiding injury prevention strategies in the future.

Cycling has been shown to have significant health and environmental benefits1. Public rental bicycle and tax incentive schemes have been introduced in Ireland in recent times, and the Central Statistics Office (CSO) reported in the 2011 census that there was a 9.6% increase in the number of people cycling to work when compared to 20062. As the number of cyclists increases, this may lead to more cycling injuries presenting to hospital.

The Road Safety Authority (RSA) reported that 639 cyclists were injured on Irish roads in 2012. This represented a 56% increase in the number of injuries when compared to 20113. This data is collected from reports regarding any collision on a public road involving a cyclist that was reported to the police. The RSA conclude from the 2012 report that 83% of cycling injuries in Ireland involved a collision with a motor vehicle. There is little published research on the prevalence of cycling injuries presenting to Irish emergency departments (EDs) and the RSA does not include hospital data in their collation of cycling statistics3.

The aim of this study is to describe the cycling related injuries presenting to the ED of a tertiary urban university hospital.

This is a retrospective review of patients with a cycling-related injury presenting to the ED of St.  Vincent’s University Hospital (SVUH) from 1st of January to 31st of December 2014. This is a tertiary adult university hospital serving a population of 300,000. Patients under 14 years old are transferred to paediatric facilities if required. The catchment area includes urban as well as rural areas popular for outdoor recreational activities.

Subjects were identified by interrogating the Maxims Clinical© ED patient information system. Triage records were electronically searched for the keywords: “bike”, “cycling”, “cyclist”, “pushbike” and “bicycle”. The triage and medical notes were screened to identify cycling-related injuries.  The medical records of matches were then reviewed by two independent researchers. (JF, AK).

Using Syngo© radiology database, imaging records were reviewed to determine the type of imaging performed and the injuries sustained. SVUH participates in the Trauma Audit and Research Network (TARN). and data was extracted from this database, e.g. the injury severity score (ISS) for patients who fulfilled the criteria for TARN4.

There were 52,621 presentations to SVUH ED during the study period. Our search strategy identified 1697 patients. Five hundred and thirty four patients fulfilled the criteria, accounting for just over 1.0% of all attendances. Eight patients did not wait to be seen in ED and there were no notes available for a further 8 patients, so information beyond demographics and triage details was not attainable for these 16 patients (2.9%). Three hundred and eighty (71.2%) were male. The mean age was 36.6 years (standard deviation (SD) 14.3; range 1-87). There were three patients under the age of 14 years. Twenty-two patients (4.1%) were aged between 14 and 18 years and 21 patients (3.9%) were over the age of 65 years. 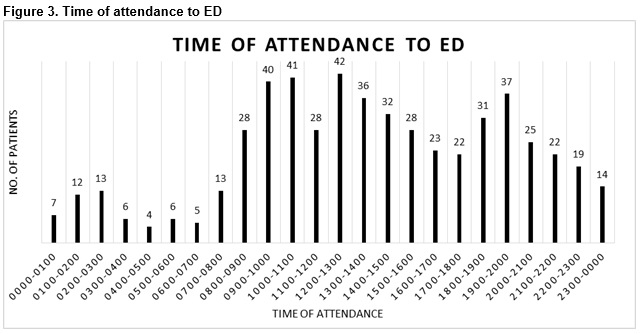 Eighty-three patients were documented as having a head injury. Four of these patients (0.75%) were found to have an intracranial haemorrhage. Two patients (0.37%) had skull fractures and 7 patients (1.3%) had facial bone fractures.  A diagnosis of concussion was made in 70 patients (13.1%).

There were two mortalities (0.37%) during the study period. Eleven patients (2.1%) were included in TARN with ISS varying from 4 to 24. An ISS ≥15 is defined as major trauma and in our cohort, 5 patients met this criterion. This group’s age range was from 45 to 61 years, and injuries included bilateral pneumothoraces, haemothoraces, spinal fractures, basal skull fractures and intracranial haemorrhage.

Seventy-four (13.9%) patients had a cast applied in ED. Six of the 7 patients with dislocations required procedural sedation for their reductions. Three patients underwent chest drain insertion in ED. Thirty-four patients (6.4%) presented to ED on spinal precautions. Three of these patients were cleared of spinal injury on examination without further investigation. 20 of this cohort (62.5%) underwent x-rays of their cervical spine and 6 of these patients subsequently underwent a CT brain or c-spine. Eleven patients had a CT of their cervical spine without x-rays. All of the spinal fractures in this cohort had spinal precautions on arrival to the ED.

Forty patients (7.5%) were admitted to the hospital and 16 (3.0%) to the clinical decision unit (CDU). The CDU is a short-stay admission facility adjacent to the ED managed by consultants in Emergency Medicine (EM)5. 452 (84.6%) were discharged home. Ten patients (5.3%) were transferred to another hospital. One hundred and forty-three patients (26.8%) were referred to outpatient services for follow up. Referrals were made to orthopaedic surgery (n=130), physiotherapy (n=6), plastic surgery (n=4), ENT (n=2) and urology (n=1). Thirty-eight patients (7.1%) were referred to the ED review clinic, most commonly for further imaging or wound review.

Thirty patients (5.6% of total) were admitted by orthopaedics, 6 (1.1%) by general surgery, 2 (0.4%) by cardiothoracic surgery and 2 (0.4%) by general medicine. Twenty-nine patients (5.4%) required surgery and underwent general anaesthetic in theatre. Six patients were admitted to the intensive care unit. The mean length of stay in ICU was 5 days (SD 5.65; 1-9). The mean length of stay of the admitted patients overall in this cohort was 4.6 days (SD 4.9; 1-22). Of the patients admitted to CDU, 11 required neurological observation, four were awaiting advanced imaging and one required pain control. The mean LOS in CDU was 12.4 hours (SD 11.1; 2-27).

According to RSA data, there has been an exponential increase in cycling injuries since 20023. However, the RSA does not include hospital statistics in their data collection. From our study, we concluded that in one tertiary university teaching hospital in Dublin, there were 534 cycling injuries in 2014. If we were to include all the hospital data in Ireland, the total of cycling injuries presenting to Irish hospitals would be much higher than current RSA data trends suggest.

We found that 14.8% of injuries involved at least one motor vehicle. When compared with the RSA’s findings (83%), this indicates that there may be a large number of cycling collisions occurring that are not being reported and therefore are not included in the RSA collision statistics.

Our study is the first of its kind in Ireland to date. This study has some limitations. This sample was from one Irish hospital only and the incidence of cycling injuries is based on the population of the study area. This is a retrospective study, and while data collection was rigorous, certain variables such as helmet documentation, location of the injury, exact time and date of the injury or mechanism of injury in particular were not documented in detail. Therefore, the impact of helmet use on the incidence and outcomes of head injury could not be assessed.

It is clear that the true number of cycling injuries on Irish roads is being under-reported and that cycling safety requires a scrutinizing review. Using hospital data may inform future policy regarding the implementation of higher safety standards on Irish roads for cyclists. The trend of under-reporting road traffic collisions has been studied internationally previously and Aptel et al showed that up to 37.3% of non-fatal injuries in road traffic collisions were not reported by police while Juhra et al estimated in 2012 that of the cyclists that attended ED in Germany, only 13% of the collisions were reported by police1,6. Similarly Elvik reported in 1999 that 95% of fatal injuries are reported but the level of reporting of non-fatal injuries depended on the severity of the injury. Interestingly, the lowest rate of reporting in this meta-analysis was for cyclists.7 This would correlate with our findings and suggests that there needs to be an alternative mechanism for reporting cycling injuries in Ireland.

There is a discrepancy between the data from the RSA and this study and it is possible that collisions not involving a motor vehicle are not being captured by the RSA, which would correlate with previous international studies. Cycling is now a very popular means of transport and exercise activity in Ireland and using hospital based data, it is possible that EDs may provide a vector for guiding injury preventing strategies in the future.