Clinical decision units (CDUs) are areas within an emergency department (ED) providing care for the patient who may benefit from an extended observation period, usually for a maximum of twenty-four hours. A retrospective patient record audit was performed to determine the characteristics of patients admitted to the Cork University Hospital (CUH) CDU over 12 months. The average length of stay of a patient in the CDU was 29 hours. The most common diagnoses admitted to the CDU were chest pain (9.5%) and headache (7.2%). The research implies that the CDU provided a means for CUH to save approximately €2 million annually

A Clinical Decision Unit (CDU) is a designated area of an Emergency Department (ED) in which patients undergo a short, intense period of investigation or observation under the care of a consultant physician specialised in emergency medicine (EM). Ideally care should be for a maximum length of stay of 24 hours. The CDU in CUH is a 12 trolley unit under the care of the EM consultants, working alongside NCHDs and nursing staff. This research was undertaken to assess the characteristics of patients admitted to the CUH CDU over a twelve month period, with an aim of establishing the most common presenting medical diagnoses.

The total number of patients admitted to the CDU during 2012 was 2,307, 4% of all ED admissions, with 1,320 (57%) males and 987 (43%) females. In total, 503 ICD-10 disease classifications presented to the CDU from the ED department. However 439 of these medical conditions had an incidence of five patients or less. For this reason, the top 12 presentations were included for analysis, with these being the only conditions with an incidence of 30 or more. The 12 most frequent presentations are shown in Table 1. The average age of a patient admitted to the CDU was 41.7 years. As males were the majority of patients admitted they also had the predominant incidence of the top twelve principal diagnoses. A total number of 2,126 (92%) of the 2,307 patients admitted to the CDU were discharged home from the CDU and did not warrant inpatient admission. The average length of stay of a patient who was discharged home from the CDU was 29 hours. The median length of stay of such a patient was 42 hours. There were 181 (8%) patients admitted to an inpatient ward from the CDU. The average length of stay of these patients before admittance to an inpatient ward was 26 hours with the median length of stay being 36 hours. In total, 51 (28%) of the 181 patients stayed less than 24 hours in the CDU before inpatient admission. Table 2 shows the average length of stay in the CDU per 12 most common causes of admission. The cardiology service had the highest amount (18%) of all CDU patients to an inpatient ward. The causes for CDU admission with a higher incidence in males include chest pain, cellulitis of lower limb and unspecified convulsions. The causes for CDU admission with a higher incidence in females include migraine, headache and paracetamol overdose. 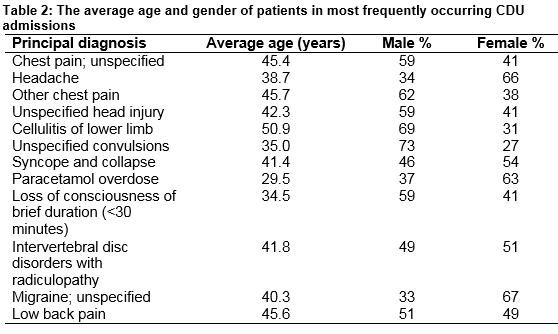 This research is some of the first assessing the functioning of the CUH CDU and its place in the provision of emergency care within the hospital. Previous studies have established that a CDU is a cost-effective means of emergency care provision1-3. The 2,126 patients discharged home from the CDU accounted for 2,568 inpatient bed days in the CDU. The 2012 HIPE report states that acute inpatient average length of stay was 3.9 days in the HSE South region. According to the HSE’s Acute Medicine Programme the average daily cost of a patient stay in hospital is around €900, with this estimation excluding the use of diagnostic tests4. This implies that the CDU provided a means for CUH to avoid the spending of approximately €2 million, thus allowing a better use of its financial resources. A similar saving of €1.7million was made in Tallaght Hospital ED, as quoted in a 2009 study on the cost-effectiveness of their CDU5. This research is not without its limitations. The HIPE data does not allow differentiation between patients who may have been admitted to the CDU more than once in 2012. The lack of data from other CDUs in Ireland makes it difficult to compare the performance of the CUH CDU to its national counterparts. Further research should be initiated into the activity of other CDUs within Ireland.

The author has no financial or any other conflict of interest to declare.