Tuberculoid leprosy is an uncommon presentation in Ireland. It may be a diagnosis worth considering in a certain cohort of patients, particularly those from the Indian subcontinent.

A 30-year old mother of three children, originally from Bangladesh presented to her GP complaining of a 2 year history of an itchy rash on her right arm (Fig 1). On examination an annular granulomatous rash was present. This was confined largely to the extensor surface of her right arm. It presented in 5-6 irregular lesions with clear, well defined, raised borders and an elevated erythematous outer margin. The patient described the lesions as itchy and occasionally tender to firm touch. No associated neurological or systemic manifestations of her condition were noted. Her medical history was unremarkable. She was on no regular medications.

The rash was initially treated with topical miconazole and steroid preparations without improvement. She was then referred to the Dermatology service where a differential diagnosis of Granuloma Annulare was postulated and she was commenced on topical tacrolimus without benefit. A punch biopsy was taken by her GP for histology. In the interim a trial of topical clobetasone initially showed some improvement. The biopsy demonstrated ‘cutaneous granulomatous inflammation, which is likely due to systemic granulomatous disease’. Special strains of acid fast bacilli and fungi were negative. The histology report stated ‘Systemic granulomatous disease including tuberculoid leprosy should be considered.’ Chest x-ray and baseline haematological investigations were normal.

Her rash spread and increased in size. Testing for HIV, antiprotinease 3 and anti-myleoperoxidase were negative and she was referred to the Infectious disease service for further investigation. A diagnosis of tuberculoid leprosy was confirmed on repeat biopsy, and the patient commenced treatment: rifampacin 600mgs and clofazimine 300mgs monthly followed by daily diaminodiphenyl sulfone 100mgs & clofazimine 50mgs daily for one year. Treatment concordance was limited initially by hyperpigmentation of the patient’s skin, possibly a side effect of rifampacin treatment1.

Several forms of Leprosy (Mycobacterium leprae) exist; all are chronic and generally affect the skin and peripheral nerves. Clinical manifestations present in a polar spectrum: lepromatous to tuberculoid2. While cases in warm, wet climates such as parts of Africa, India and South East Asia are not uncommon (250,000 new cases annually, 70% occur in India)3 it is still a rare presentation in Ireland3,4. Diagnosis is made on skin biopsy. Special staining of the tissue may show acid fast bacilli and confirmation is with nucleic acid amplification tests2,4. Treatment is aimed at minimising progression and thus disability. The disease ceases to be infectious once treatment is commenced. Medication adherence is paramount².

No cases of leprosy were recorded in Ireland between 1981-20123. Since then 2 cases have been reported4: Leprosy has been listed as a notifiable disease since 20114. Cases in the indigenous population are extremely rare with no previous reports identified3,4. With current trends towards inward migration into the EU, Leprosy may become a condition which warrants consideration in certain populations when constructing a differential for rashes not responding to conventional treatment. 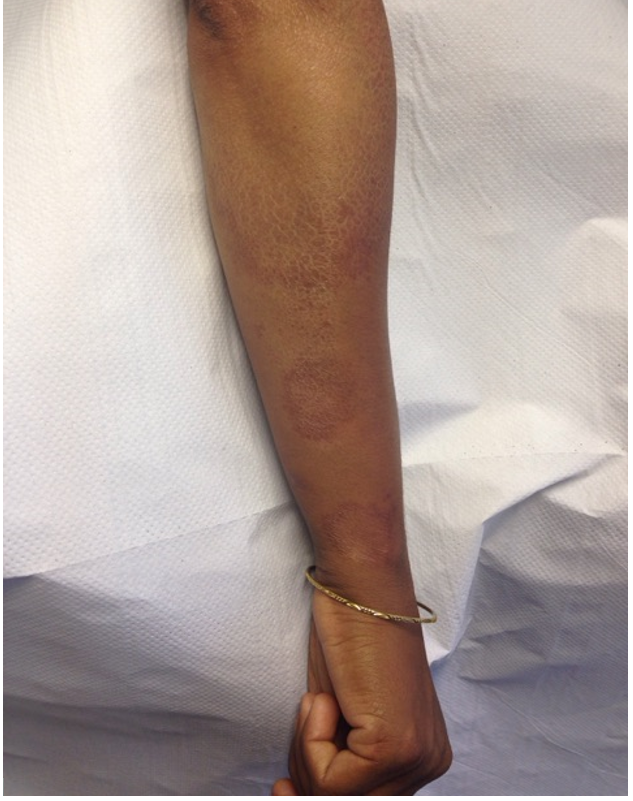