An increase in invasive group A streptococcus (GAS) cases referred to the paediatric infectious disease (PID) department of the Children’s University Hospital (CUH), Temple Street, prompted review of all invasive GAS cases in 2016. All of the 10 cases identified occurred over a 16-week period from February to June, of which 6 (60%) required admission to the paediatric intensive care unit. The median length of stay was 21.5 days. Seven had active chickenpox infection at diagnosis. This study highlights the significant morbidity of invasive GAS in children in Ireland. Most cases were associated with a vaccine preventable illness, which should prompt reappraisal of the absence of varicella vaccine from the national immunisation schedule in Ireland.

Introduction
Group A streptococcus (GAS) causes a variety of acute clinical syndromes from pharyngitis and scarlet fever commonly seen in primary care to more severe life-threatening invasive disease. Invasive GAS, categorised into three groups - necrotising fasciitis, streptococcal toxic shock syndrome and sepsis with or without an identifiable source of infection- is a notifiable disease to the Health Protection Surveillance Centre (HPSC)1. Laboratory criteria for a confirmed case require isolation of GAS from a normally sterile site. The HPSC previously reported a marked increase in the incidence of invasive GAS infections from 1.65/100,000 population in 2011 to 3.65/100,000 in 20132. The increased incidence was notable also for a 300% increase in the proportion of invasive GAS cases in children. After a slight decrease in incidence in 20153 (2.3/100000), we noted a cluster of invasive GAS cases referred to the paediatric infectious disease (PID) department of Children’s University Hospital (CUH), Temple Street, in 2016. We sought to further characterise this cluster of paediatric invasive GAS infections.

Methods
All referrals to the PID service in CUH are recorded on an electronic database that includes diagnosis and causative organism. This database was searched for any cases involving GAS infection in 2016. Invasive GAS infection was defined as per the HPSC. Cases that did not fit criteria for invasive disease were excluded. A medical chart review was carried out for all patients with invasive GAS and data collected on patient demographics, clinical presentation and hospital course.

Results
Sixteen patients were referred to the PID service in CUH in 2016 with GAS infection, of whom 10 fulfilled criteria for invasive disease and are included in this analysis. All 10 cases occurred over a 16-week period from February to June. Median age was 2.5 years (range, 0.8 - 3.9yrs) and 5 were male. All were previously healthy without history of underlying immunocompromise. Diagnoses and interventions are shown in the table. Seven had active primary chicken pox with admission occurring a median of 5 days after onset of rash. All had either secondary (5, 71%) or persisting, increasing fever (2, 29%). Six patients (including three with chicken pox) required admission to the paediatric intensive care unit (PICU). The median length of stay (LOS) in PICU was 6.5 days (range, 3- 22 days). The median LOS in hospital for all 10 patients was 21.5 days (range, 7-103 days). 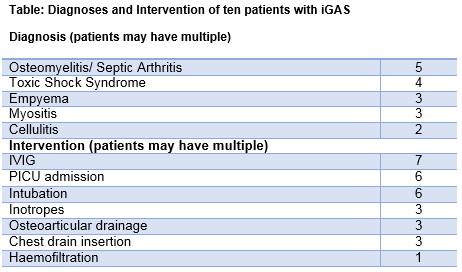 Conflicts Of Interest
There are no conflicts of interest on the paper.