Neural tube defects (NTD) are potentially preventable in two-thirds of cases by periconceptional maternal Folic Acid (FA) supplementation. A national audit for the years 2009-11 showed no decline in NTD rates over twenty years. The aim of this national audit was to determine trends/rates and inform revision of national FA supplementation and food fortification strategies. Of 274,732 live and stillbirths there were 121(42.0%) cases of anencephaly, 136(47.2%) cases of spina bifida and 31(10.8%) cases of encephalocoele giving a total of 288 and overall rate of 1.05/1000 compared with 1.04/1000 in 2009-11(NS). In the 184 women where the information was available, only 29.9%(n=55) reported starting FA before pregnancy. The number of cases diagnosed antenatally was 91%(n=262) and 53%(n=154) were live-born. This audit confirms that over a generation, healthcare interventions have not succeeded in decreasing the number of pregnancies in Ireland complicated by NTD, and that revised strategies need to be developed and implemented.

Introduction
Following two landmark randomised controlled trials showing that Folic Acid (FA) supplementation before pregnancy prevented Neural Tube Defects (NTD)1,2, national guidelines from 1993 recommended periconceptional FA supplementation for all women planning a pregnancy. These recommendations had little impact on NTD prevalence worldwide3 as half of clinical pregnancies are unplanned, and many women are unaware of the benefits of supplementation4,5. Subsequently, mandatory FA food fortification with folate was implemented in many countries6. This led to a reduction in the prevalence of NTD particularly in North America7,8. In Ireland, the Food Safety Authority (FSAI) published a 2006 report9 recommending mandatory fortification at a level of 120μg/100g in bread. In 2008, a follow up report on implementation recommended continuing voluntary rather than implementing mandatory fortification because a national survey of maternity units suggested that NTD rates were falling10. Following anecdotal reports of an increase in cases requiring neonatal surgery for spina bifida, we conducted a comprehensive national audit of NTD for the years 2009-1111. We found that rates of NTD had not fallen after the introduction of the FA supplementation, and indeed may be increasing. Subsequently, similar reports were published from the UK and Europe12,13.

Consequently, the FSAI published an updated 2016 report recommending mandatory FA food fortification14 as an option, and the Department of Health established a Folic Acid Policy Group. A challenge in evaluating mandatory fortification in other countries has been the absence of high quality baseline pre-implementation rates. The purpose of this national contemporary audit of NTD was to inform the work of the Policy Group by updating the previous audit, to establish recent trends and baseline rates prior to developing updated supplementation guidelines and evaluating mandatory food fortification.

Methods
NTD were defined as anencephaly, spina bifida and encephalocoele. Cases of iniencephaly were grouped with anencephaly, lipomyelomeningocoele and atretic encephalocoele were excluded. Pregnancy outcomes were classified as live-birth, stillbirths, termination of pregnancy for fetal abnormality (TOPFA) and miscarriages. The audit used multiple sources of information, with each data source verified and crosschecked by a single researcher (VD), as in the previous audit, so that duplication of cases and omissions were avoided.

The NPRS provided data on stillbirths and neonatal deaths. There is no national audit on pregnancy losses, including TOPFA, where the fetus weighs less than 500g. However, it was possible to confirm that the outcome of the majority of pregnancies where an NTD was diagnosed prenatally and where the mother did not give birth in the hospital where booked for maternity care, was a termination of pregnancy. This information was provided by the clinicians providing care. For women of Irish and foreign nationality, the clinicians informed us that it was very unlikely that mothers would have gone abroad and given birth abroad without clinical communication between the Irish clinician and the clinician in the hospital of birth, considering the presence of a major congenital abnormality. Limited sociodemographic data and no delivery data were available for cases where the outcome was a TOPFA. 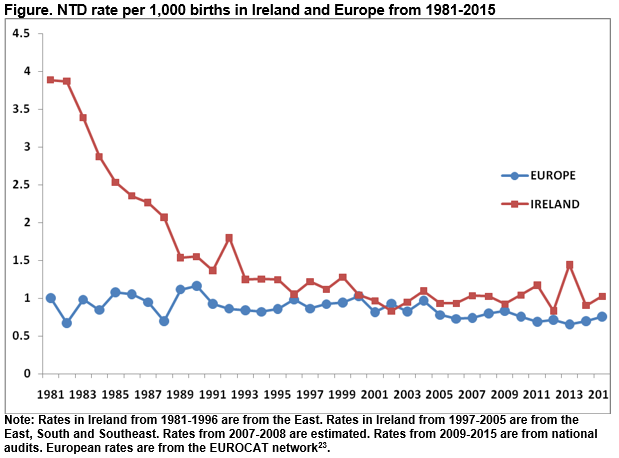 Discussion
This comprehensive repeat national audit found that the overall incidence of NTD was 1.05 per 1,000 births in the four years 2012-15, which is remarkably similar to the rate of 1.04 per 1,000 births reported for the three previous years 2009-11 using the same methodology11, and includes live births, stillbirths, TOPFA cases and miscarriages. The findings also demonstrate that there has been no decrease in NTD rates in the Republic of Ireland since the publication of national recommendations on FA supplementation in 1993 and notwithstanding voluntary food fortification of folate. The findings are also similar to those published from other European countries since 199312,13.

Two thirds of NTD are thought to be preventable by FA and it is disappointing that only 29.9% of women reported taking FA before they conceived. Even in cases where women had a history of infertility and presumably attended for gynaecological consultation, only 50.0% took FA before they conceived. It is a concern that women at high risk of NTD are not taking high dose FA supplementation despite evidence from the 1991 RCT and subsequent international recommendations. These observations further highlight that current guidelines on supplementation need to be consistent and updated in the light of new scientific evidence17.

The overall number of cases diagnosed prenatally increased between 2009-11 and 2012-15 from 83% to 91%. However, cases that were not diagnosed may reflect variations in anomaly ultrasound services between maternity units18. This strengthens the case for standardisation of ultrasound services and practices across the 19 maternity units and the development of clear care pathways for the subsequent management of women with pregnancies complicated by fetal anomalies. It is also notable that although the rate of prenatal diagnosis of spina bifida increased from 74% (2009-11) to 87% in 2012-15, three quarters of pregnancies resulted in a live birth, which is twice as common as in other European countries. In view of the heavy burden of lifelong illness for children with spina bifida and for their families, and in view of the heavy fiscal cost to the health services, the prevention of NTD should be prioritised in Ireland.

Although 31% (54/173) of women in our audit were clinically obese, it is disappointing that only two of these 54 women, had taken a high dose of 5mg FA, particularly with the known obesity-NTD link19,20, and also in light of the recommendation in clinical practice guidelines in Ireland21 and the United Kingdom22 of a high FA 5mg dose for obese women. Our findings confirm that the strategy of voluntary food fortification with folate has been unsuccessful. Mandatory fortification has reduced the numbers of NTD by 30% in United States7 and more so in Canada8. While other countries may implement national screening policies using maternal prenatal biomarkers and ultrasound anomaly scanning and offer TOPFA in selected cases, it is difficult to understand why no country in the European Union (EU) has implemented mandatory FA fortification. In view of the free movement of food and food ingredients across national boundaries, implementing mandatory fortification in Ireland will almost certainly require EU legislation and regulation. There is a strong interdependence between Ireland and the UK when it comes to the provision of food and thus mandatory fortification will be a further challenge post Brexit.

In conclusion, our finding that current supplementation and voluntary folate food fortification strategies have failed to reduce NTD rates in Ireland since 1993 will inform the development of new national strategies following the 2016 FSAI report14 and the Report currently being crafted by the Department of Health Folic Acid Policy Group. These results provide a robust baseline rate of NTD which can be used in the future to evaluate the success or failure of new public health interventions.