Can 'Hot Spotting' Prove to be a Useful Tool to Identify Disproportionate ED Use in the Rural General Hospital Setting?

‘Hot spotting’ allows the identification of areas with disproportionate use of  Emergency Department (ED) services. To date, ‘hot spotting’ has focused on large urban centres. The aim of this study was to determine if there are geographic hotspots for ED use in the rural general hospital. ED attendances were logged between 1st July 2013 and 30th June 2014. Frequent users and super users were isolated. Addresses were cross referenced against national census data to determine number of users per 500 population in geographically distinct regions. The number of frequent users ranged from 1.00/500 population to 4.88/500 population. Four out of nineteen areas had ≥4 frequent users per 500 population. There was no correlation between number of users and distance from MGH (p=0.44). 77% of frequent users presented with mixed aetiologies. Nineteen percent of frequent attenders presented via GP referral only, 13% attended via self-referral only and 88% attended via GP and self-referral routes.

Worldwide, Emergency Department (ED) attendance is continuing to increase, especially in the setting of universal health coverage supported by a strong primary care service1,2. Previous work has shown that frequent users of Emergency Department services can compromise between 4.5-8% of the patient population, but can account for up to 28% of ED attendances3. There are a number of important issues around frequent ED attendance. Frequent users often have complex chronic medical conditions unsuitable for management in the ED setting3,4. Furthermore, frequent attendees of EDs are also frequent users of other healthcare services. It has previously been shown that early community based intervention for frequent users of emergency services can lead to both a reduction in attendance as well as a significant cost saving per patient5,8. ‘Hot spotting’ is a method of determining if there are distinct geographic areas disproportionately contributing to frequent ED use, that may benefit from early community based interventions in an effort to reduce unnecessary ED attendance. The rural general hospital offers a particular challenge in allocating community resources. In contrast to urban centres, the rural hospital deals with a geographically dispersed population, where distances from the community to the hospital are often far in excess of city-based hospitals. There are no studies to date examining whether geographic hotspots exist for the rural setting or whether they may be of use in allocating scarce community resources. The aim of this pilot project was to examine patterns of ED attendance in our institution to determine if specific geographic hot spots exist that may form the basis for future community-based interventions.

Over a one-year time period between 1st July 2013 and 30th June 2014 ED attendances to Mayo General Hospital (MGH) were logged. There are a wide range of definitions of frequent use and super use of the ED. For the purposes of this study, frequent users were identified as attending between four and 7 times in a 12 month period9. Super-users were defined as having 8 or more ED attendances in a 12 month period. Frequent users and super users were isolated from our ED attendance log. Data recorded included patient age, address, presenting complaint and method of referral. Home addresses of frequent users and super users were mapped geographically. National census data for population per area was cross referenced against user addresses10. Population centres with more than 500 residents were included. In order to maintain anonymity of patients and GP practices, frequent users and super users were calculated per 500 population, and each location was then anonymised. Nineteen population centres were included in the study. The distance from each population centre in kilometres, using public roads, to MGH was calculated using Google Maps software (Map Data ©Google, 2015). The relationship between frequency of ED attendance and distance to the ED was examined using logistic regression analysis (StatsDirect Ltd. 2013). 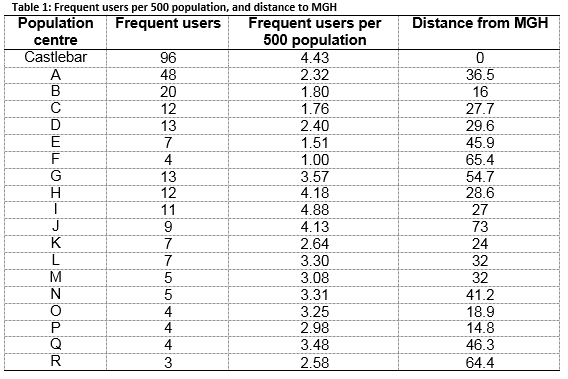 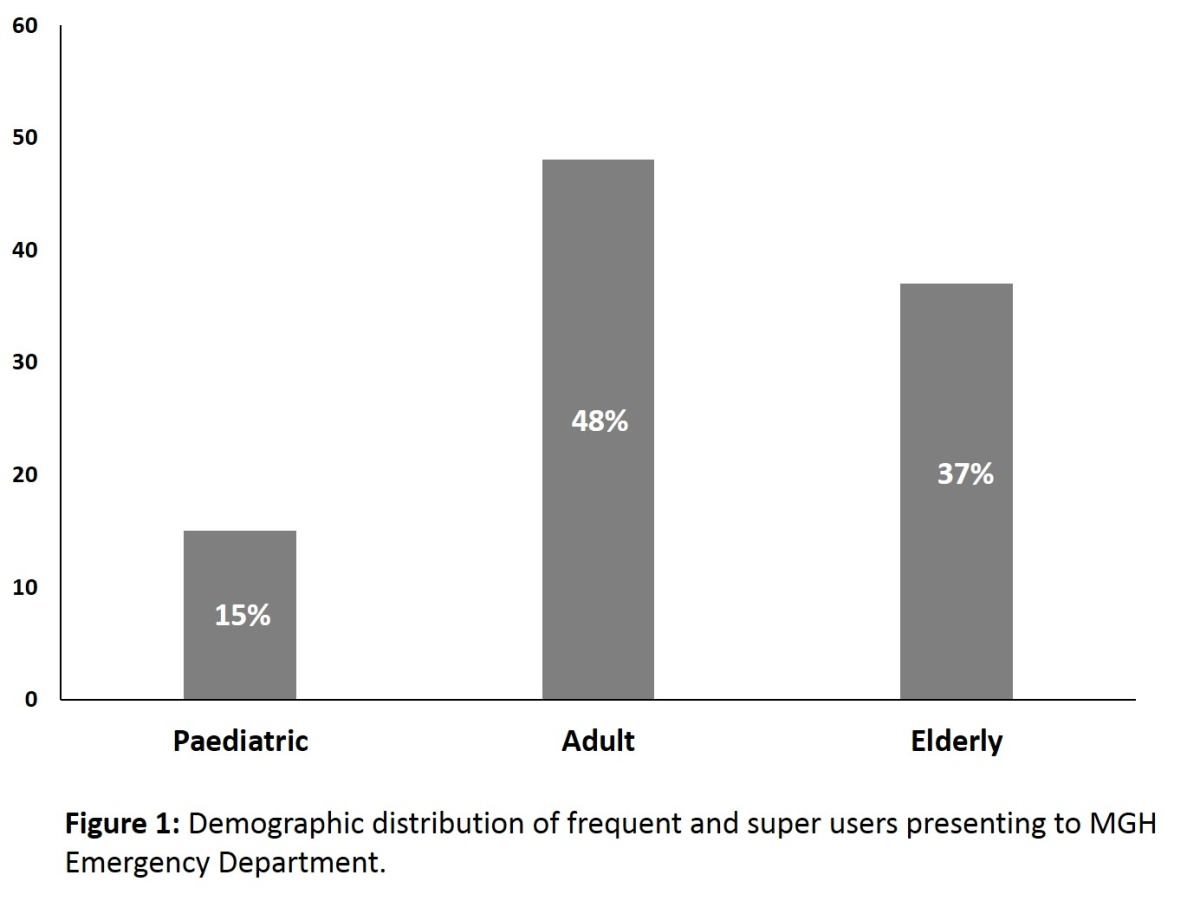 To determine if distance from the ED was associated with frequency of use, logistic regression analysis was performed. This showed that there was no correlation between distance from the ED and the presence of frequent or super users (p=0.48). There was a wide age distribution of frequent and super users. Fifteen percent of our population were paediatric (age <16), 48% were adult (age 16-64), and 37% were elderly (age ≥65). When we looked at the presenting complaints, only 23% of users presented with the same complaint on multiple occasions, as defined by the triage nurses. The other 77% of patients had a mixed pattern of presentation. Finally, we examined referral patterns to the ED to determine if patients were attending ED services in place of general practice usage. Sixty-eight percent of frequent and super users had a mixed picture of GP referral and self-referral. Nineteen percent of patients only attended having been referred by GPs, and 13% of patients never saw a GP before presenting to the ED (Figure 2). 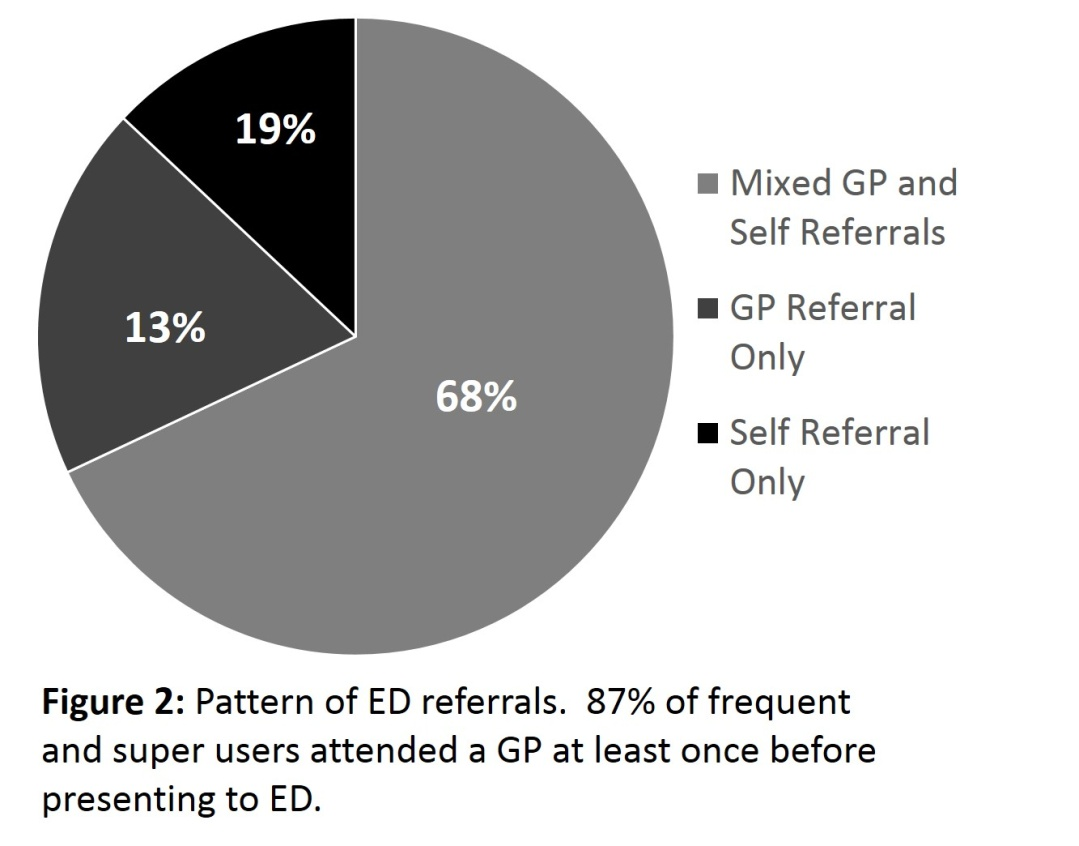 Emergency Department crowding is increasingly acting as a barrier to accessing timely care in the acute setting. Emergency Department crowding occurs when the demand outstrips the availability of services, leading to patients being monitored and cared for in sub-optimal conditions, including on chairs and trolleys in hallways11. The ED plays a central role in the health care service, acting as a critical interface between community health services and hospital-based care. It must be stressed that acute and chronic healthcare services are indeed two aspects of the same service, and that inappropriate stressors on one element of the system may affect service delivery across the entire hospital system11. In the Irish context, this can be seen when strain on ED services in winter frequently leads to the cancellation of elective surgeries.  When considering ED crowding, there are three areas to examine: input factors, throughput factors and output factors11,12. The aim of this pilot study was to focus on input factors; to determine if we could identify if there are particular ‘hotspots’ in our large geographic catchment area that disproportionately use ED services. As expected, Castlebar, the town where MGH is located, demonstrated a high level of ED usage based on population. However, area H demonstrated a higher level of use, in spite of being geographically remote to MGH. Furthermore, a number of other locations showed levels of use comparable to Castlebar, again while being remote to MGH. There was no correlation between distance to our ED and frequency of usage. This suggests that factors other than ease of access are at work. Andersen and Laake described three factors affecting ED usage: patient need for services; patient factors affecting the likelihood of seeking ED care, and enabling factors that affect the ability to access care13.

Our patient population was distributed between paediatric, adult and elderly groups, with adults making up the highest proportion of ED users. This is consistent with other studies14. The proportion of patients who are inappropriately using ED services varies widely in the literature and although Sempere-Selva et al reported a figure of 29.4%, they also report national data from Spain suggesting it can range from 10% to 90%14. Common sources of inappropriate ED attendance are due to non-urgent visits (frequently due to chronic health conditions or dissatisfaction with waiting times for elective procedures), ‘frequent flyer’ patients and spikes in attendance due to influenza or norovirus12. Although our population showed a wide variation in presenting complaints, it is reasonable to suggest that a proportion of these, such as patients presenting with recurrent musculoskeletal pain, should not be using the ED as their point of care. The authors believe that by focusing resources on the hot spots of highest ED usage, it may be possible to reduce the burden on our ED. Furthermore, the reasons motivating frequent ED use must be identified. These may be genuine healthcare concerns, however other factors such as lack of availability of primary care and delays in accessing outpatient specialist care need to be elucidated and understood14.

A critical element of input factors affecting ED usage is the referral pattern to the ED. In our study population of frequent users, 13% of our patients never saw a general practitioner before attending. Although this takes into account patients brought in by ambulance as emergencies, there are a proportion of patients who deliberately attend without seeing a GP. A further 68% of our patients had at least one of their presentations without attending primary care. This is similar to other studies14, but also suggests that at least some of these attendances could potentially be avoided if patients were encouraged to use primary care for non-emergency conditions. A number of interventions to decrease frequent ED use have been suggested, split into three main areas: case management, individualised care plans and information sharing. Case management is a multidisciplinary approach where a single point of contact is appointed to manage care in conjunction with a multidisciplinary team15. A recent systematic review by Soril et al demonstrated that although case management as a strategy has a significant investment cost, it leads to a long term cost saving on a per-patient basis16. Furthermore, the Royal College of Emergency Medicine recommend a case management approach to managing frequent ED use17,18. Individualised care plans differ from case management in that although there is a care plan drawn up for each frequent attender, there is no designated point of contact to manage their ED access. There is conflict in the data as to whether they provide a significant cost saving per patient16.

Information sharing is an information technology based strategy to combat frequent ED use. This method needs an excellent IT infrastructure both in the hospital and in the primary care setting. Each time a frequent user attends the ED, their primary care physician and appropriate allied health professional get an electronic update and summary of their hospital care. This can lead to a significant decrease in ED usage and a cost saving per patient 16. The challenge that the authors see is adapting these strategies to effectively manage ED access in a rural general hospital setting, where there is no immediate prospect of receiving funding to initiate a project intervening in this fashion. We propose focusing our limited resources on using the hotspots identified in this study to implement a combination of individualised plans and information sharing with primary care. We have identified a number of geographic hotspots that disproportionately utilise our ED services. This will lead to more focused planning around healthcare resources in an effort support early community interventions and decrease unnecessary ED attendance.

The authors confirm there are no conflicts of interest