Comparing cardiovascular risk factors, disease and treatment in participants with rheumatoid arthritis and without arthritis in a population based study

Rheumatoid Arthritis (RA) is associated with a significant increase in mortality compared to the general population, with cardiovascular disease (CVD) the leading cause of death. The aim of this study is to compare the prevalence and treatment of modifiable CV risk factors and history of CVD in those with RA and those without arthritis in Ireland. Data from the Irish Longitudinal Study on Ageing (TILDA), a population-representative cohort study of people in Ireland aged 50 or over, was used. Participants with RA (n=457) were twice as likely to be obese (OR 2.02, 95% CI 1.99 to 2.06) compared to those without arthritis (n=4,063). Participants with RA were also more likely to be physically inactive (OR 1.73, 95% CI 1.69 to 1.76) and taking antihypertensive medication than those without arthritis. Exercise can have a beneficial impact on CVD and specific interventions to increase physical activity in those with RA may be warranted.

Introduction
RA is associated with a significant increase in mortality compared to the general population with CVD the leading cause of death1,2. RA is associated with a 60% increase in risk of CVD-related death compared with the general population (standardised mortality rate 1.6, 95% CI 1.5 to 1.8)3. CVD-related death in RA may be attributed to persistent chronic active inflammation due to poor disease control as well as the increased burden of traditional CV risk factors. These risk factors include hypertension, diabetes mellitus (DM), dyslipidaemia, obesity, and smoking4,5. A meta-analysis of 15 case control studies concluded that traditional risk factors such as smoking, DM and lower high density lipoprotein (HDL) levels appear to be more prevalent in RA patients than in age and sex matched healthy controls6. Whether hypertension is more prevalent in patients with RA compared to the general population is as yet unclear7, however, there is some evidence that hypertension is underdiagnosed and undertreated in patients with RA8. The aim of this study is to compare the prevalence and treatment of modifiable CV risk factors and CVD in participants with RA, and those without a self-reported diagnosis of arthritis from a population based study on aging in people aged over 50 in Ireland.

Methods
The Irish Longitudinal Study on Ageing (TILDA) is a population-representative prospective cohort study of over 8,500 community living people resident in the Republic of Ireland aged 50 or over. Participants in TILDA were sampled in geographic clusters, with each member of the Irish population aged 50 and older having an equal probability of being invited to participate in the study9. Ethical approval was obtained from the Trinity College Dublin Research Ethics Committee. Data from the first wave of data collection, between 2009 and 2011, were used. A subset of 5,880 participants was selected for this analysis based on participation in the health assessment and availability of data on blood pressure and blood lipids. Participants who reported having arthritis were asked which type of arthritis they had. The options included osteoarthritis, rheumatoid arthritis, some other kind of arthritis, and don’t know. Participants were also asked if they had ever been told by a doctor that they had any of the following: hypertension, angina, heart attack, congestive heart failure (CHF), diabetes, stroke, TIA, high cholesterol, heart murmurs and abnormal heart rhythm. All medications being taken by participants were classified according to the WHO Anatomical Therapeutic Chemical (ATC) classification system. Antihypertensive medication was taken to include antiadrenergic agents, diuretics, beta blocking agents, calcium channel blockers and ACE inhibitors10. Objectively measured hypertension was defined as systolic blood pressure (SBP) ≥140 mm Hg and/or diastolic blood pressure (DBP)≥90 mm Hg.  Participants were defined as having objectively measured hypercholesterolemia if total cholesterol ≥ 5.2 mmol/L. Height was measured using a wall-mounted measuring rod while weight was measured using electronic floor scales. Body mass index (BMI) was calculated as weight/height2 with weight measured in kilograms and height in meters. Obesity was defined as a BMI of ≥ 30kg/m2. The International Physical Activity Questionnaire11 was used for self-report of physical activity and categorised activity into low, moderate and high levels. Sampling weights were used in all analyses to account for selection and participation bias. These weights were constructed based on age, sex, educational attainment, marital status and geographic location. Weighted numerical summaries are presented for demographic and clinical characteristics. An independent samples t-test was used to compare means across groups (no arthritis, RA). A chi-squared test was used to test for associations between categorical variables. A Mann-Whitney test was used to compare medians across groups. A 5% level of significance was used for all tests.

Cohen’s f2 was used to evaluate effect size for numeric variables with Cohen’s f2=0.2 representing a small effect, 0.5 a medium effect and 0.8 a large effect.  Cramer’s V was used to evaluate effect size for categorical variables with Cramer’s V=0.1 representing a weak association, 0.3 a moderate association and 0.5 a relatively strong association. Binary logistic regression models were used to predict self-reported prevalence (yes, no) of each CV risk factor and disease after adjusting for age, sex and group (no arthritis, RA). Models to predict obesity also adjusted for physical inactivity. Models to predict taking antihypertensive medication adjusted for obesity and physical inactivity. Odds ratios (ORs) and 95% confidence intervals are reported. Goodness of fit was assessed using the Hosmer-Lemeshow chi-squared test. IBM SPSS Statistics Version 20 for Windows and SAS software Version 9.2 for Windows (SAS Institute, Inc.) were used to carry out the analysis.

Results
Of those with valid blood pressure, blood lipid data and sample weights, 4,063 (72.4%) reported no diagnosis of arthritis; 457 (8.5%) reported a diagnosis of RA and 735 (12.6%) reported a diagnosis of osteoarthritis. 6.5% of participants either had other forms of arthritis or didn’t specify the type of arthritis. Table 1 summarises demographic, self-reported medical history and objective measurements of BMI and waist to hip ratio of participants by two groups (no arthritis, RA). Those with RA were older, more likely to be female, with lower levels of education, higher rates of physical inactivity and were less likely to have private health insurance compared to those without arthritis. While differences across groups were statistically significant for all variables, effect sizes were small (Cramer’s V < 0.1) except for education, self-reported hypertension, and obesity. Table 2 summarises the odds of self-reported CV risk factors and history of CVD after adjusting for age and sex. Those with RA had higher odds of self-reported hypertension, diabetes, high cholesterol, angina, heart attack, CHF, stroke, TIA, heart murmur and abnormal heart rhythm compared to those without arthritis. They also had higher odds of physical inactivity after adjusting for age and sex. 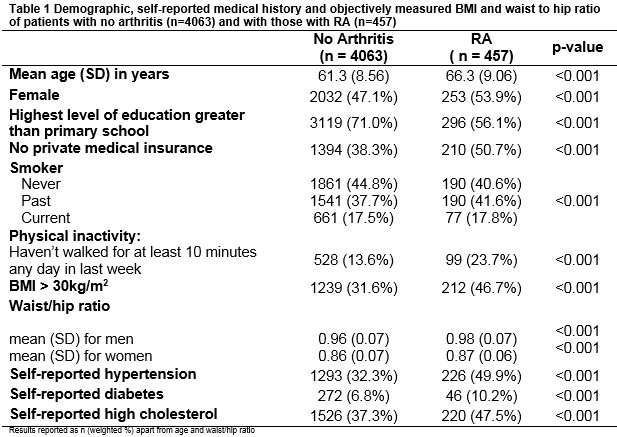 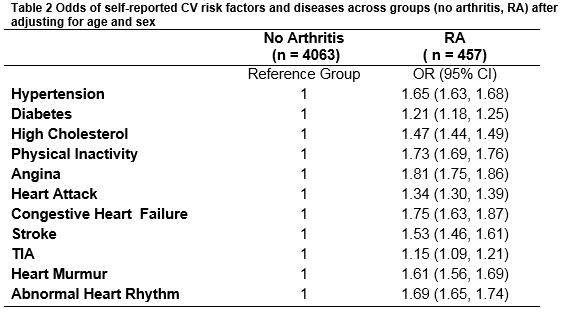 Discussion
Arthritis is highly prevalent in those aged over 50 in Ireland with 28% of participants reporting some form of arthritis in this study. The prevalence of RA in those over 50 was estimated at 8.5% which is comparable to the estimate of 6.2% reported by Ong12 in those aged over 40 in the US based on the U.S National Health and Nutrition Survey (NHANES) 1999-2008. While the relationship between inflammation and increased CV risk has received much attention, there is a gap in the research on the prevalence and treatment of traditional modifiable CV risk factors in subjects with inflammatory arthritis compared to the general population. Our study adds to the literature by comparing traditional CV risk factors of those with RA to those without self-reported arthritis in a population-representative cohort study in Ireland. Participants in this study with RA had an excess risk of self-reported diabetes compared to those without arthritis after adjusting for age and sex. Significantly higher rates of obesity were also found in participants with RA using both BMI and waist to hip ratio as measures of adiposity. There is limited research on the treatment of hypertension in those with RA compared to the general population. While our study found that those with RA had higher odds of self-reported hypertension than those without arthritis, we found no evidence of under treatment of hypertension. Those with RA were significantly more likely to be taking anti-hypertensive medication than those without arthritis after accounting for higher rates of obesity and physical inactivity.  The treatment rates in our study were higher than those observed by Meek13 in patients in a rheumatology outpatient population. This could be a consequence of better access to primary care which was provided free until recently for all those aged over 70 in Ireland and ongoing education of general practitioners in the management of hypertension in primary care14.

Exercise can have a major beneficial impact on the likelihood to develop, suffer symptomatically or die from CVD by reducing risk factors such as obesity15,16. A recent systematic review of physical activity levels in those with RA concluded that levels of physical activity may be lower among individuals with RA when compared with healthy controls or normative data17. Almost one in four of participants with RA in our study reported not having walked for at least 10 minutes any day in the past week, almost twice the rate of physical inactivity reported by those without arthritis. There may be disease related reasons for inactivity e.g. joint symptoms or lack of advice from health care providers on physical activity and lack of available arthritis-specific exercise programs18. However, properly designed physical exercise programs for those with RA have been shown to improve cardiorespiratory fitness and CV health, increase muscle mass, reduce adiposity, and improve strength and physical functioning. This can be achieved without exacerbation of disease activity or joint damage19. Recommendations for CVD risk management in those with RA by the European League Against Rheumatism (EULAR) taskforce in 2009 did not discuss diet or exercise but updated guidelines in 2015 acknowledge the increasing evidence that structured exercise therapy has beneficial CVD effects in patients with RA, at least in the short and medium term20. Specific interventions to increase levels of physical activity in the RA population and ongoing education of health care providers on the benefits of physical activity in this population may therefore be warranted17.

The strength of this study is a large sample which is representative of the general population in Ireland. Blood pressure, blood lipids, height, weight and waist to hip ratio were objectively measured. A limitation is the self-report of medical history, physical activity and diagnosis of arthritis. Also this analysis is cross-sectional but the cohort will be followed every two years for the next decade which will provide the opportunity for longitudinal research of physical inactivity, obesity and other CV risk factors, their treatment and the prevalence of CVD in those with RA compared to those without arthritis in the general population.

Conflict of Interest:
There are no conflicts of interest