Background:
Oocyte donation pregnancies- non-disclosure of oocyte recipient (OR) status to obstetric care providers and perinatal outcomes.Many studies report a higher rate of pregnancy-induced hypertension (PIH) and severe pre-eclampsia (PET) in OR pregnancies. The objective is to determine the rates of non-disclosure of OR pregnancy to obstetric care providers and also the rates of perinatal complications.

Method:
This was a retrospective review of all oocyte recipient (OR) pregnancies, who subsequently delivered at Cork University Maternity Hospital, between 2007- 2012 inclusive. Obstetric case notes were reviewed to investigate perinatal outcomes and whether OR status had been documented (unambiguously, in code or not at all).

There was a low rate of clear documentation of OR status. Gestational hypertensive disorders occurred with increased frequency.

Introduction
Oocyte donation (OD), since its introduction 30 years ago, has become an increasingly common solution to involuntary childlessness. Initially, it was used to enable women with premature ovarian failure to conceive1. Increasingly, it is recommended to women of advanced reproductive age and to those with intractably poor embryo quality2. The most recent European data continues to demonstrate a year on year rise in the number of OD cycles. Between 2011 and 2012 there was a 10% rise in the number of OD cycles, and a 28.2% increase on the previous year3,4. The vast majority of Irish couples travel abroad for oocyte donation treatment, most frequently to Spain and the Czech Republic; a tiny minority undergo treatment in Ireland using an altruistic donor. Couples undergoing oocyte donation treatment are counselled to inform their child about his/her donor conception.5 However, in pregnancy, many couples are undecided or do not wish to inform the child and therefore do not wish to disclose their OR status to obstetric care providers. OR pregnancies have a higher incidence of pregnancy complications- particularly hypertension6,7. Non-disclosure of OR status makes it difficult to identify these higher-risk pregnancies, target antenatal care appropriately and may inflate the incidence of complications in OR pregnancies. The objective of this study was to establish the proportion of women who disclose the origin of their pregnancy to their obstetric care provider and the true rate of complications.

Methods
All OR pregnancies were retrospectively identified from the patient database at Cork Fertility and those that delivered at Cork University Maternity Hospital (8,500 births annually with public and private maternity care delivered in a single unit), during the period January 2007- December 2012, were included. Those who delivered elsewhere were excluded. Oocyte donation treatment with both known and anonymous donors is carried out at Cork Fertility as well as medical support for women who undergo oocyte donation treatment in other clinics. The fertility charts of the study population were reviewed. Obstetric charts were reviewed for documentation of OR status: unambiguous documentation (OR status clearly documented in writing), coded identification (OR status identifiable through a subtle, non-standardised coding system, familiar only to the obstetrician) and no documentation.

Obstetric medical records were reviewed to identify the rate of maternal complications. Specifically, gestational hypertensive disorders, either pre-eclampsia (defined as persistent blood pressure of ≥ 140/90mmHg after 20 weeks’ gestation with associated proteinuria >300mg/24 hours) or pregnancy-induced hypertension (persistent blood pressure readings ≥ 140/90mmHg, without associated proteinuria, occurring after 20 weeks’ gestation), gestational diabetes mellitus and obstetric cholestasis. The gestation, onset of labour and mode of delivery, were recorded. The rates of maternal complications were assessed according to age ranges: 45 years or older, 40-44 years, 35-39 years and less than 35 years. These were further divided according to parity. The data was also compared to that of the general hospital population8. In this study, we report descriptive statistics on maternal characteristics, clinical practice, maternal and perinatal outcome using SPSS (IBM SPSS Statistics version 20). 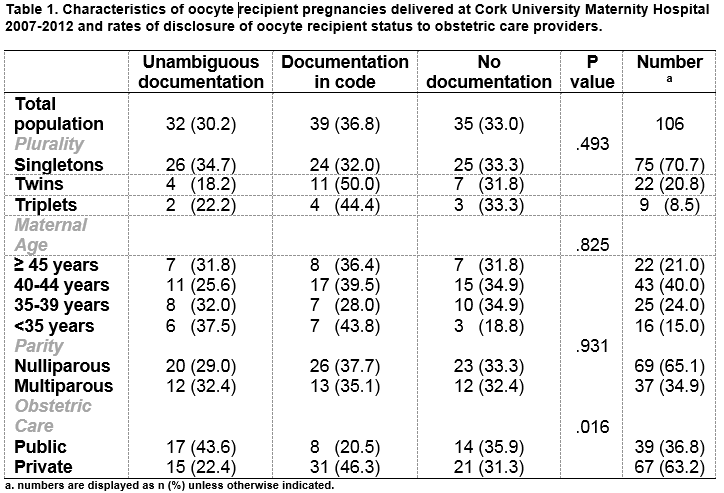 Disclosure of oocyte recipient status
Thirty percent (30.2%; n=32/106) had unambiguous documentation of OR status in their obstetric case notes. A further 36.8% (39/106) had coded identification. Coding included underlining the first two letters of the abbreviation ‘E.D.D.’ (‘estimated date of delivery’) or writing the abbreviations ‘DE’ (‘donor egg’) or ‘ED’ (‘egg donation’) discreetly in the obstetric records. (Table 1). One third (33%; 35/106) had no form of documentation of OR status. Of this group, 27 had ‘IVF treatment’ documented and the remainder (n=9) had no documentation of any assisted conception. There were no differences in rates of disclosure according to plurality (p=.493). Similarly, there were no significant differences in rates of disclosure according to age profile, however those less than 35 years had a low rate (18.8%) of having no documentation of OR status. This age group had the highest proportion of infertility due to premature ovarian failure (56%). Women attending for private obstetric care were more likely to have coded documentation (p <0.05). (Table 1)

Maternal Complications
Gestational hypertension was the most frequently diagnosed maternal complication, occurring in almost one-third (28.3%; n=30). Both PET and PIH occurred with equal frequency. (Table 2) Both PET and Gestational Diabetes occurred at a significantly higher rate than that of the general hospital population (14.2; n=15/106 v 1.4 %; n= 495/34490 and 3.7% n= 4/106 v 1.2%; n= 423/34490 respectively)8. Only one-quarter of all women who developed gestational hypertensive disorders had unambiguous documentation of OR status. (Table 2) 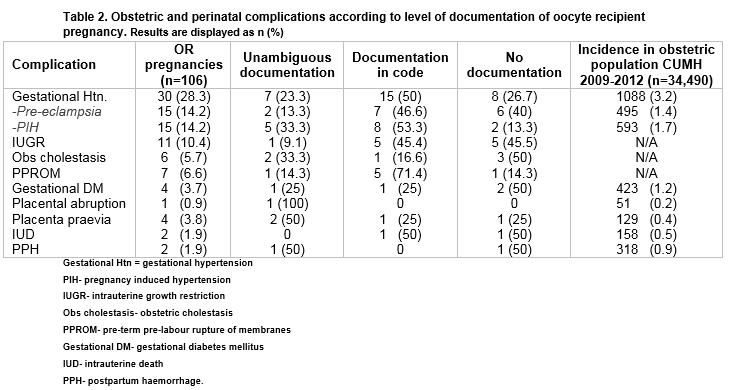 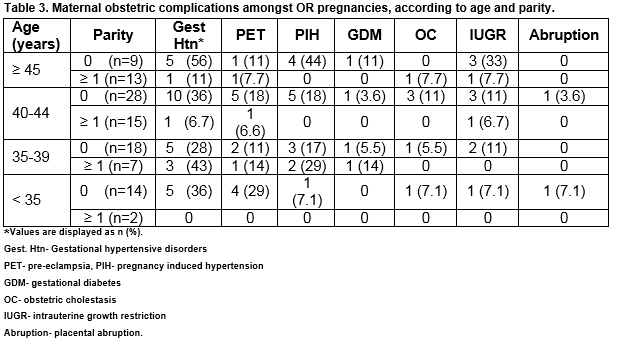 According to the recommendations from National Institute for Health and Care Excellence regarding hypertension in pregnancy, aspirin is advised from 12 weeks’ gestation in the presence of two or more moderate risk factors which include; first pregnancy, age ≥ 40 years old and multiple pregnancy9. Less than one third (31.4% n= 16/51) of the women with two or more of these risk factors were appropriately prescribed aspirin. The rate was highest amongst the multiple pregnancy group (42.8%; n= 12/28) and only 17.4% (n= 4/23) amongst at-risk singleton pregnancies. During the study period, there was one case of severe life-threatening pre-eclampsia. In this case there was no documentation of either donor oocyte or assisted conception. The 35 year old nullipara with diminished ovarian reserve, presented at 18 weeks’ gestation with acute PET. She developed severe HELLP syndrome and an associated liver laceration, requiring laparotomy and hysterotomy to deliver the fetus10.

Discussion
This study highlights a low rate of clear documentation of OR status in 106 oocyte recipient pregnancies, one-third of which were complicated by gestational hypertensive disorders. Gestational Diabetes (GDM) occurred with increased frequency compared with the general hospital population. The strength of this study is that it is the first to report on rates of non- disclosure of oocyte recipient status to the obstetric care provider. It is particularly relevant in those jurisdictions where egg donation is not legally or readily available, requiring prospective oocyte recipients to travel abroad for treatment. The recently enacted Children and Family Relationships Bill in Ireland contains legislation relating to donor conception11. This legislation prohibits the use of anonymous egg donation in the country. However, it is accepted that anonymous egg donation treatment abroad, where, commonly, anonymity is mandatory, will not be prohibited by the Act. This means that large numbers of Irish couples will continue to have anonymous egg donation treatment abroad and many will continue to conceal the status of their pregnancies to their obstetric care providers.

We are aware of the limitations of our study particularly the inability to obtain a suitable control group, conceiving with autologous oocytes, matched for age and parity. Data was not available on the general population in terms of age and parity to compare incidence of complications. From this study, we were unable to distinguish if it is request by patients or suggestion by the obstetrician that led to non-disclosure or coded documentation in obstetric records. This important distinction warrants further investigation as it would allow insight into the extent of patient comfort with disclosure and associated concerns regarding confidentiality.

Almost one-third of OR pregnancies were complicated by gestational hypertension and the rates of PIH in particular are similar to those reported in previous studies12-17. Nulliparity and maternal age 45 years or above accounted for the highest proportion of women with PIH. However, nulliparas less than 35 years of age had the highest incidence of pre-eclampsia. Studies by Levron et al and Keegan et al had similar findings, where young oocyte recipients had the higher rate of pregnancy-induced hypertension and pre-eclampsia when compared to IVF patients conceiving with autologous oocytes. They suggest the possibility of a causal link between the pathophysiology of early loss of ovarian function and the development of PIH, which could warrant further investigation18,19. Although our numbers are small, thus limiting interpretation of the data, all cases of GDM in the study group occurred in women aged 35 years or more, which is consistent with the link between advanced maternal age and increased prevalence of GDM 20. There was one case of early-onset, life threatening pre-eclampsia with an associated late miscarriage where there was no documentation of OR status. There are several similar reports in the literature including one by Pecks et al of severe life-threatening pre-eclampsia in OR pregnancies 6,21.

The low rate of disclosure and clear documentation limits the obstetric team in the delivery of appropriate antenatal surveillance. Furthermore, opportunities for appropriate intervention, such as the prescribing of aspirin, are missed. The low rates of disclosure and clear documentation of OR pregnancies should be addressed in a sensitive way in order to maintain confidentiality while allowing the obstetric care provider to optimise antenatal surveillance in this higher-risk pregnancy group.

Funding
No funding was received for this study

Authors’ Contributions
MG, SM, KOD and JW contributed to critical revision of the manuscript for intellectual content and approved its submission for publication

Acknowledgements
The authors would like to acknowledge Eilis McCarthy, Egg donation co-ordinator at Cork Fertility for her significant contribution to data collection