Paediatric patients represent a large percentage of Emergency Department (ED) visits and there is often a perception that the acuity of these presentations is low. The decision-making process that results in parents attending the ED is poorly understood. We designed a cross-sectional cohort study to explore the reasons for attendance, the treatment initiated at home and to assess parental perception of the economic cost of attendance. Data was collected on 200 patients using a survey administered to parents in ED with a follow-up phone call 4-6 weeks later. Our results suggest that attendances are often prompted by parental anxiety rather than clinical deterioration and that prior ED usage is common among those presenting for assessment. Many parents had attempted community therapy with 128/200 patients (64%) having been referred by a healthcare professional and medical therapy at home having been employed by 114/200 (57%) parents before attendance. Parental knowledge of the safety of over-the-counter medications was variable the economic cost of an ED visit was poorly understood by participants. The results of our study suggest that parental desire for control over worrisome symptoms drives much of their management strategy prior to hospital attendance. Strategies in the ED may need to focus more on managing parental expectations than on managing the illness itself and management strategies employed should focus not only on medical therapy of the child’s illness but on educating and empowering the parent.

For parents of unwell children, it is the perceived seriousness of acute illness or the perceived loss of control that prompts them to seek medical help either with their family physicians or through direct attendance to the Emergency Department (ED)1. Prior to attendance at the doctor or ED most parents will have enacted treatment strategies. On availing of medical assessments parents may reflect on the value for money that they have received. This study was undertaken to explore parental knowledge and decision-making regarding prehospital therapy and the economics of the ED visit.

This study was conducted in the ED at Mayo University Hospital. The study utilised a cross-sectional survey which evaluated a) patient demographics b) illness symptoms c) healthcare utilisation, d) treatment strategies inclusive of medications, and e) knowledge of medications used. The study was restricted to children and adolescents under 16 years presenting to the paediatric ED over a 2-month period (May-June2013), not requiring immediate resuscitation. The survey was administered to parents prior to the child or adolescent being assessed. Telephone contact was undertaken with participants 4-6 weeks after the initial visit to evaluate the number of parents who had received a bill following their attendance and whether they felt the visit had represented value for money. The study was approved by the Mayo University Hospital ethics committee.

Two hundred and seventy-five parents were invited to participate of whom 200 (73%) completed surveys. One-hundred and eight of 200 (54%) were referred by their family physician, 56/200 (28%) were self-referrals and 36/200 (18%) did not answer. One-hundred and twenty-eight of 200 (64%) had a letter of referral from a healthcare professional (GP/medical officer/public health nurse).

Symptom complexes that prompted ED attendance are outlined in table 1. One-hundred and two of 200 (51%) of those surveyed were admitted to hospital for observation and treatment.

Examples of parental reasons for attending the ED

Space was provided on the questionnaire for parents to elaborate on their reasons for attending the ED with their child. Below are examples of some typical narrative responses provided:

“Tummy pain and vomiting not relieved by neurofen or calpol.”

“For info on what I can do at home so maybe we won’t have to stay in the hospital.”

“On Inhaler, no change. Seems to have got worse.”

“For peace of mind that there is nothing serious going on.”

One-hundred and fourteen of 200 parents had administered some form of medical therapy before attendance with 95/114 (83%) indicating they would adopt the same therapeutic strategy again and 65/114 (57%) indicating it represented value for money. Table 2 lists the type of medications given by parents before arrival. 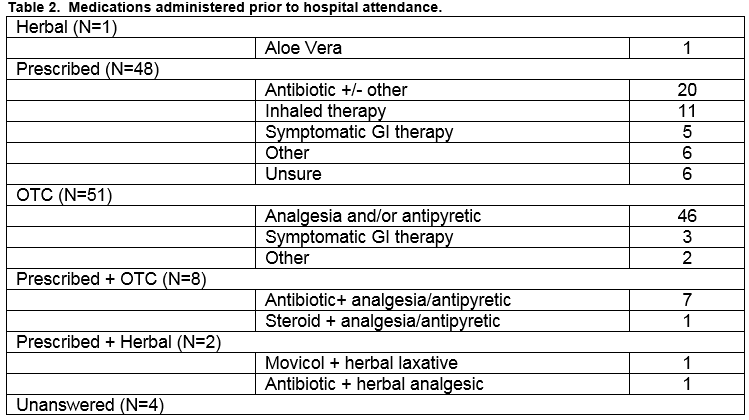 Parental beliefs on safety of medications in children was assessed by asking directly about their willingness to use four commonly prescribed medications and whether they felt these medications were safe in children. The results are summarised in Table 3. Parents were also asked how they would decide on dosing for each of the four medications. Response rates for this question varied greatly between the 4 medications (range of response rates 27%-61%). Of those who responded on average 11.2% stated that they would use the instructions on the label.

Economics of the visit

One-hundred and seventy-four of 200 (87%) participants were successfully contacted 4-6 weeks after discharge. Twenty-two of one-hundred and seventy-four (12.6%) had received a bill for their time in the ED as they were not in receipt of a medical card or referral letter. All but one of these had expected to be charged. Mean satisfaction score of parents who had been billed was 4/5 (range 2-5).

Prior ED usage in our parents was frequent with fewer than 30% stating that this was their first visit and almost half having attended in the past year. The admission rate in our cohort was 51% (102/200) which was higher than expected. This likely reflects a sampling bias as those with minor illness are discharged, spending less time in the ED and having less time to complete and return surveys. Admission rate is also known to be affected by the time of day and given that this was a sample of convenience it is likely that certain time periods were over-represented.

The majority of our population had consulted a general practitioner (GP) prior to arrival, and while it has been suggested that >80% of GP referrals are discharged home from the paediatric ED2, published data shows that the majority of paediatric patients are managed appropriately in primary care without hospital referral3. It is worth noting that 21.5% (43/200) of those surveyed were presenting for a second time with the same illness and from the narrative responses provided by parents it seemed to be a combination of either genuine clinical deterioration or parental anxiety due to continued symptoms at home. Parents in our institute are routinely advised at ED discharge to represent if they have ongoing concerns, and while this advice provides a very valid safety net, it also mandates a small number of inappropriate re-attendances. Also noteworthy is the fact that 10% of patients were attending the OPD with the same problem prompting ED attendance, however almost all of these cases were for clearly defined chronic medical illnesses with a natural history of acute exacerbation (e.g. asthma, diabetes).

Our qualitative data suggests that many attendances were prompted by parental decisions rather than referrals by healthcare professionals based on clinical severity per se, this is reflected in the selected quotations from parents in our results. Many parents stated in the qualitative section that their GP had provided them a letter “just in case” they became worried outside of regular working hours and wished to have their child reassessed. The advantage of this approach is that parents feel reassured that they have a strategy if their child’s condition deteriorates and it prevents re-attendance at an out of hours GP that will be unfamiliar with the family dynamic and the child’s current health issues. The obvious disadvantage is that, for those few patients that wish to avail of ED services inappropriately for minor illness, it provides an easier avenue for attendance and in certain cases may act to legitimise ED attendance in the “worried well”.

Research suggests that parents recognise illness in their children but have difficulty grading severity4. Data from general practice suggests that the majority of minor childhood illnesses are managed by parents at home5, and medical consultation is only undertaken if they perceive home therapy to be ineffective or symptoms have not improved . Despite this, our data shows that prior ED usage among parents was very common, with less than 30% having never used the ED before and almost half of our patients having attended at least once in the past year, a figure similar to that recorded in previous studies2. These high attendance rates are despite the relatively easy access to out-of-hours GP services in our locale, and our qualitative data suggests that attendance is often based on parental uncertainty and worry rather than the child being critically ill. Children are known to be among the commonest inappropriate attenders with large-scale data from UK ED records confirming that inappropriate attendances peak in the paediatric age group7. A previous study of 1029 patients attending the ED in a Northern Irish hospital indicated a relationship between proximity to the ED and usage8, suggesting convenience may impact decision making9,10.

Respiratory, gastrointestinal and pyrexia-related symptoms were the commonest reasons prompting ED attendance, data which is unsurprising given the long-standing beliefs that parents hold regarding the seriousness of these symptoms1,5,11. Most parents had used some form of medical therapy before consultation reflecting previously established norms in parental care of children in times of illness12,13. Medications given were usually appropriate to symptoms present and all medications employed were licensed for paediatric use. Eighty-three percent (95/114) reported that they would use the medication again despite only 57% (65/114) reporting value for money with the product used; perhaps reflecting the parental instinct that they must do something in the face of childhood illness even if their efforts are perceived as unlikely to succeed. The medication which parents most frequently listed as providing value for money were: combined antibiotic and OTC 100% (8/8), prescribed or OTC symptomatic GI therapy 75% (6/8), antipyretics alone 65% (30/46) and antibiotics alone 35% (7/20). The narrative responses provided by parents for using medications suggest a need to control problematic or worrisome symptoms. The most commonly used medications were antipyretics reflecting their well-established safety profile14, and the parental perception of fever as a worrisome symptom15. Hawkins showed that 96% of children had received some form of medication before 6 months of age16, and the ALSPAC study revealed that ¾ children have used some form of medication before the age of 8 weeks, even in cases where the medication is unlicensed17. Use of antipyretics are known to be liberal in children with even mild symptoms18, which may reflect poor parental understanding of diseases processes19, or lay misconceptions regarding the difference between symptom management and ‘cure’20.

ED attendance in Ireland is free with either a state-provided medical card or a referral letter from a medical practitioner and fewer than ¾ parents were aware of this. Knowledge of the actual fee incurred when neither of these is available (€100) was variable and this combined data reflects poor parental awareness of the economics of an ED visit. Data on the perceived value from the ED visit showed that the experience was generally considered to be good value with the average Likert score being 4/5 for those incurring direct expense.

Our study has limitations. We utilised a convenience sample who were predominantly recruited during daytime hours. This leads to a sampling bias which would not be present had the patients been enrolled sequentially. It is likely that the profile of attendances at night would have been quite different and may have represented many more of the “worried well” discussed earlier, and as a result we hypothesise that the data presented herein may represent a cohort with greater baseline morbidity than may otherwise have been present. While these factors limit the generalisability of results to all ED attendances we feel that the data presented is of great value as, regardless of the illness present, it allows insight into the events leading to presentation and it is this decision-making process, rather than the underlying illness, that we sought to understand. Parental desire for control over worrisome symptoms drives much of their management strategy prior to hospital attendance and their management of minor illness is not ideal. Strategies in the ED should focus more on managing parental expectations than on managing the illness itself and utilise the visit to both educate and empower the parent.