Post stroke fatigue (PSF) is a frequently reported symptom by stroke survivors undergoing rehabilitation. This cross sectional observational study was undertaken in a rehabilitation facility to look at its prevalence and relationship with various variables like personal factors, type of stroke, social context, hemispheric involvement on CT scan and mobility status. The results showed that PSF was present in 83% (25 out of 30) of the patients included in the study. No clear association could be established between PSF, social, radiological and functional characteristics.

Introduction
Post stroke fatigue is a common yet under diagnosed phenomenon among stroke patients. Relatively little is known about how it is experienced and how mobility deficits, social supports and radiological associations relate to it. On the other hand, fatigue is a well-researched symptom in multiple sclerosis with number of scales used for evaluation and various treatment modalities in place including medications and nonpharmacological strategies. This study aimed to determine the point prevalence of post stroke fatigue in a rehabilitation hospital, its relationship to sociodemographic, clinical and radiological factors.

Methods
Cross sectional observational study. All the stroke inpatients with age >18 years in the National Rehabilitation Hospital Jan- Feb 2015 admitted for rehabilitation who had a stroke in the last 6 months of admission were interviewed using a structured questionnaire and review of medical record. Patients with profound aphasia, cognitive impairments, who refused to participate, with background liver and renal dysfunction were excluded from the study. Post stroke fatigue was assessed by using the Fatigue severity scale and the Fatigue severity visual analogue scale. The level of functioning was assessed by the disability rating scale.

Results
A total of 30 (21 males, 9 females) patients fulfilled the inclusion criteria, out of which n=25 reported fatigue at the time of interview with a mean age of 47.4. Five patients with mean age of 55 denied the symptom. Sample included 21 patients with ischemic stroke and 9 with haemorrhagic stroke. Out of the 25 who reported fatigue, n=17 had sustained an ischemic stroke. Mean time since injury was four months in the fatigued and three months in the non-fatigued group. N=12 were employed, n=8 lived alone, n=10 were moderately dependent out of the 25 individuals who reported fatigue. There were 17 smokers and 7 alcohol dependant individuals in the fatigue group. Past medical history of depression was present in four (16 %) and hypothyroidism in two (8 %) patients who reported fatigue. No significant past medical history was seen in the non-fatigue group. There was right sided involvement on the CT scan in n=9 (36 %), and n=2 (40 %) in fatigued and non-fatigued group respectively. Sixteen (64 %) patients had left sided involvement in the fatigued group versus three (60%) in the nonfatigued patients. Out of 25, 16 patients in the fatigue group were mobile with or without aid and all 5 out of 5 were mobile in the nonfatigued group. 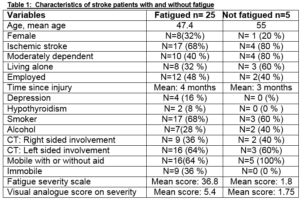 Overall, fatigue was more prevalent in the male smoker population who had sustained an ischemic stroke in the last four months more so with left sided radiological involvement. Demographics, socioeconomic and clinical characteristics of both these groups included in the analysis are enlisted in table 1. The differences between fatigued and not fatigued patients were assessed by chi-square test. Data was analysed using SPSS v. 17.

This survey shows that post stroke fatigue is a prevalent symptom n= 25 (83.3 %) in patients undergoing rehabilitation post stroke in the NRH. The limitation of the study is its small sample size. No clear correlation could be concluded between fatigue, psychosocial, clinical or radiological variables. No association was established between fatigue, level of functioning and mobility. However, the survey does suggest necessity of formal assessment of fatigue in stroke rehabilitation. It would be interesting to look at the effect of fatigue on multidisciplinary therapies.

Discussion
Persistent fatigue is a common and debilitating consequence of stroke. Prevalence rates of post stroke fatigue (PSF) are substantial, varying between 38 and 73%1. It has been hypothesized that fatigue after stroke results from a combination of organic brain lesion and psychosocial stress related to adjustment to a new life situation. It interferes with the rehabilitation process and impairs the patient’s ability to regain functions lost because of the stroke2. Besides being frequent, PSF was judged by between 23% and 59.5% of stroke patients to be one of their worst symptoms. Nevertheless, the level of awareness of this condition among relatives, work colleagues and medical staff remains low3. Risk factors for post stroke fatigue include older age and female sex, activities of daily living impairment, living alone or in an institution, anxiety, pre stroke depression, leukoaraiosis, myocardial infarction, diabetes mellitus, pain and sleeping disturbances4,5.

There is no uniform definition of PSF and it is generally defined as “a subjective experience of extreme and persistent tiredness, weakness, or exhaustion after stroke, which can present itself mentally, physically or both and which is unrelated to previous exertion levels”. Since this definition is intrinsically subjective and no derivative assessment tools have been specifically constructed for patients with stroke, a large variety of fatigue rating scales have been used in research and clinical practice. Some of these tools assess the dimension of fatigue severity, such as Visual Analogue Scales others, such as the Fatigue Severity Scale, measure the impact of fatigue in daily life1. A better understanding of PSF will enable healthcare professionals to recognize this ‘invisible handicap’ more frequently and explain it clearly to the patients3.  Further research is required to operationalize and validate fatigue assessment tools and to identify specific interventions that may alleviate fatigue post brain injury6.