In the Republic of Ireland, the schedule of state-funded immunisation for children is comprehensive and includes diphtheria, pertussis, tetanus, pneumococcus, hepatitis B, meningococcus C, haemophilus B, polio, measles, rubella and mumps. Varicella and meningococcal B vaccines are commercially available but are not currently funded by the government. Each of the illnesses preventable by these vaccines can cause substantial morbidity, and rarely mortality, in infants and children. Our PICU continues to see serious illness due to avoidable infection. There were 39 admissions in a 4 year period, with 34 children surviving to discharge. Nine children were infected with pneumococcus, with 4 deaths. There was one case of pertussis, causing death. Most infections occurred in previously healthy children. These preventable conditions represent a significant burden on children, families, and on social and healthcare resources.

Introduction
Children who do not receive immunisation remain vulnerable to life-threatening infection from a number of different bacterial and viral pathogens. In Ireland, children are offered vaccination as part of the State-funded scheduled immunisation programme1. There are several additional vaccines available through general practitioners (GP), with parents paying for the vaccine and its administration.

Each year, the 23-bed university-affiliated Paediatric Intensive Care Unit in Our Lady’s Children’s Hospital, Crumlin, admits 900-1100 patients. This paper describes the ongoing pattern of admission and outcomes due to vaccine preventable conditions over a four year period. This pattern may change in the future, as vaccines are added to the funded schedule.

Methods
This study was a retrospective review of admission data from 2011-2015 using existing data collection and recording tools (PicaNet and ICIP). Ethics committee approval was waived as it is part of ongoing clinical data collection. All children admitted to PICU with a diagnosis of sepsis secondary to a bacteria or virus for which there is a widely available vaccine were included. 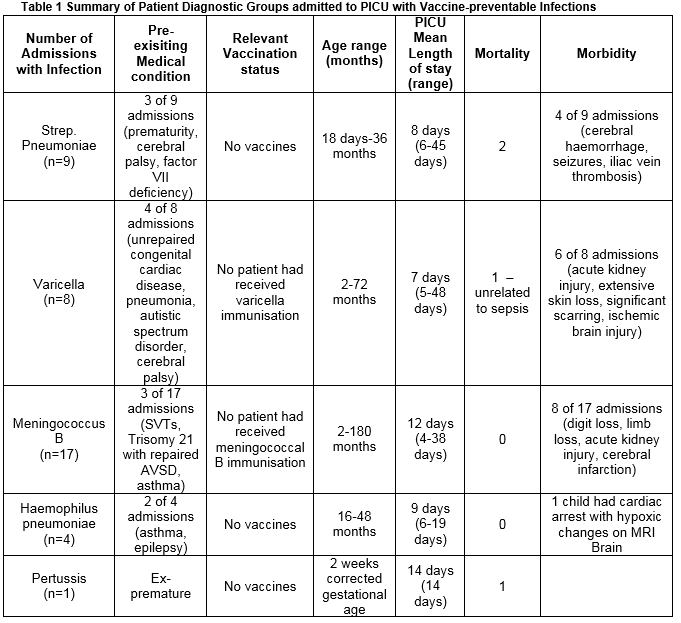 Discussion
There are many reasons why children do not receive their scheduled immunisation, including illness2. Children are screened for fever, rash and malaise before vaccination, and this may result in planned vaccination being deferred. Parents may choose not to have their child immunised following the routine schedule because of concerns over the effects of vaccine medications2,3. There were no cases of vaccine failure resulting in serious illness. Eight younger infants who presented with severe pneumococcal infection less than 6 weeks of age had not commenced their schedule of vaccines. One infant was admitted to PICU with pertussis infection, at corrected age of two weeks. The infection occurred 4 weeks before the anticipated age for administration, and this child did not survive. Neonates rely on herd immunity to protect them against infection4,5. The level of immunity decreases when overall rates of immunisation fall within a community6, which is why the Health Protection Surveilance Centre (HPSC) has strongly recommended that pregnant women receive pertussis immunisation in the third trimester7. Children with varicella infection (n=8), presented with secondary bacterial infection. Organisms isolated included invasive Group A Streptococcus and Staphylococcus aureus, and these super-infections led to systemic sepsis, cellulitis and empyema. Varicella infection may be avoided with an organism-specific vaccine, which is not funded by the Irish Health Service8. Parents may ask their GP to administer this two-dose vaccine at an average cost of €300.

Meningococcal B sepsis was the largest diagnostic group (n=17), with 10 patients experiencing serious morbidity. There were no deaths in this group, reflecting improvements in early recognition and critical care management9. The vaccine for meningococcal B infection is commercially available since 2014, at a cost of approximately €300. Routine administration as part of the primary schedule is planned. Families who cannot afford to pay would not be offered these vaccines routinely. Our audit illustrates that bacterial and viral infection continues to result in significant morbidity and mortality in a small number of Irish children. Most of these infections and their subsequent burden of illness may be avoided with immunisation. Critical care admission is costly in terms of physical, psychological and family support required, and in socio-economic terms10. Although overall numbers are small, each case represents a child and family who have had a traumatic and avoidable experience, some with serious longterm consequences.

Conflicts of interest:
There were no external or internal sources of funding sought or obtained in preparation of this paper. The authors do not have any conflict of interest in issues discussed in this manuscript.