Venous Thromboembolic (VTE) events in hospitalised patients are associated with significant mortality and morbidity and a major economic burden on the health service. It is well established in the literature that active implementation of a mandatory risk assessment tool and thromboprophylaxis policy reduces the incidence of hospital associated thrombosis (HAT). This study examines the utilization of a VTE risk assessment tool and thromboprophylaxis (TP) policy in Irish hospitals that manage acute admissions. A national survey was distributed to forty acute hospitals throughout Ireland. The response rate was 78% (31/40). The results showed that only 26% (n=8/31) of acute hospitals in Ireland have a local implemented TP policy. Six (75%) of these eight had a risk assessment tool in conjunction with the TP policy. All respondents who did not report to have a TP policy and risk assessment tool agreed that they should implement VTE prevention policy at their hospital. Based on the data from this survey and evidence from the effectiveness of the VTE prevention programme introduced in the United Kingdom, there is a need for a national risk assessment and thromboprophylaxis policy in Ireland. This change in practice would have the potential to prevent or reduce the morbidity and mortality associated with hospital acquired thrombosis

Venous thromboembolism (VTE), which includes deep vein thrombosis (DVT) and pulmonary embolism (PE), is a major cause of preventable morbidity and mortality in hospitalized patients1. In 2004 there were more than half a million deaths related to VTE across the European Union2. Three quarters of these deaths were associated with Hospital Acquired Thrombosis (HAT). There is a consistent association between the rising incidence of VTE and increasing age. In Ireland, 33% of the hospitalised population is above 65 years3. Prevention is the key to reduce death and disability resulting from HAT4-6. There is no national VTE risk assessment (RA) tool or thromboprophylaxis (TP) policy in Ireland. The aim of this survey was to examine how many acute hospitals in Ireland utilise a VTE risk assessment tool and TP policy.

There is no validated survey in the literature to collect the data required therefore a survey was constructed by the investigating research team. The team included haematologists with a special interest in haemostasis and thrombosis. The survey contained ten questions which collected data relating to thromboprophylaxis policy and practices around the country (table 1). The survey was distributed by email to all Chief Executive Officers (CEOs)/General Managers (GMs) and Clinical Directors of acute hospitals in Ireland via the Medical Director of Cork University Hospital in April 2015.  Maternity, paediatric and non-acute hospitals such as community hospitals were excluded from this survey. A hard copy of the survey was also sent with a stamp addressed return envelope for those who preferred to use this method.  Responses were anonymised to increase the response rate and openness. Results were analysed using Microsoft Excel. 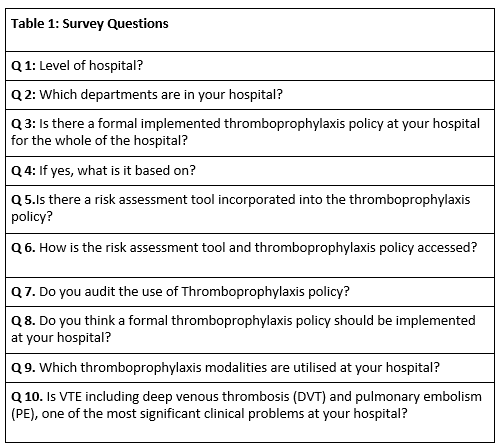 Forty surveys were distributed to hospitals throughout Ireland. Thirteen surveys were completed online and eighteen were completed by post. This resulted in a response rate of 78% (31/40). Questions one and two were excluded from analysis for the following reasons. Question one was unanswered by all respondents. There was a technical difficulty with question two which meant that respondents were not able to make multiple selections of the departments within their hospital using the online survey. Therefore, it was decided by the investigators to exclude this question. A TP policy was implemented in 26% (n=8/31) hospitals.

Questions four to seven were only relevant to those that had a TP policy in place and focused on the policy content. Eight out of eight hospitals reported their policy is based on National Institute of health and Clinical Excellence (NICE) guidelines. One respondent reported using American College of Chest Physicians (ACCP) guidance in addition to NICE. Six (75%) of these eight had a risk assessment tool in conjunction with the TP policy. 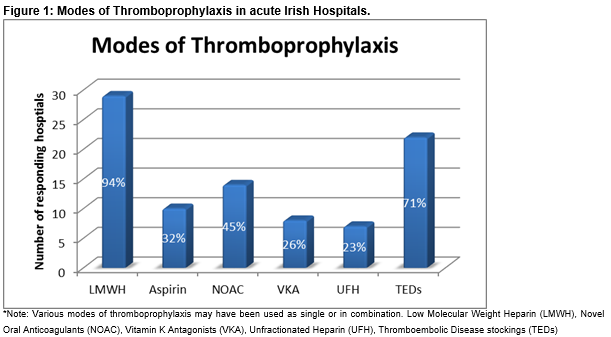 The last question in the survey asked respondents if they agreed or disagreed that “VTE, including DVT and PE, is one of the most significant clinical problems in your hospital”. There was agreement among 42% (n=13/31) of responders and one respondent did not reply to this question.

This is the first survey addressing the issue of thromboprophylaxis in Irish hospitals. It demonstrated wide variations in practices among hospitals. VTE is a major cause of preventable morbidity and mortality in hospitalized patients7-10. Three quarters of Irish acute hospitals have no TP policy.  Hospital acquired VTE may be prevented by risk assessing all hospitalised patients and prescribing thromboprophylaxis where appropriate.

Following a report in 2007 from the Common Health Committee in the UK, that more than 25,000 deaths in hospitals are related to VTE11, a national VTE prevention programme was introduced in the United Kingdom (UK). Implementation of the TP policy and risk assessment was mandatory in all National Health Service (NHS) hospitals in England in 201012. These hospitals were asked to meet the VTE risk assessment screening target of 90% of hospitalised patients. To encourage compliance, these NHS funded acute care providers were linked to the national Commissioning for Quality and Innovation (CQUIN) payment framework for 2010-201113. This has shown a reduction in VTE related secondary diagnosis, readmission and a reduction in VTE related mortality14.

Based on the data from this survey and evidence from the VTE prevention programme introduced in the United Kingdom, there is need for a national risk assessment and TP policy in Ireland. This would have the potential to prevent or reduce the morbidity and mortality associated with hospital acquired thrombosis. This study demonstrated willingness amongst hospitals, which did not already have a TP and a risk assessment tool, to implement measures to prevent HAT.

Study limitations include the use of a non-validated questionnaire. Clinical directors/CEOs/GMs of acute hospitals may not be aware of all local risk assessment tools and policies in their hospitals. The sampling frame used limits the detection of individual clinicians’ practice patterns and there may be some underestimation of the actual non documented TP practices within the hospital. Nevertheless, this survey method yielded useful estimates of TP policies across Ireland with a good response rate.

The current lack of a national VTE risk assessment tool and TP policy within hospitals in Ireland is a significant and acknowledged patient safety risk. Variability in clinical practice highlights the need for rigorous efforts to develop and implement an evidence based national HAT prevention program.

The authors thank the Irish Haemostasis Research Foundation Limited for providing an educational grant to Dr. Khan to complete his MD. We thank the Clinical Research Facility UCC for facilitating Dr. Khan’s research fellowship. We would also like to thank Dr. Lorraine Lester for editorial assistance and correction of this manuscript. A special thanks to all CEOs, GMs and clinical directors of all acute hospitals who provided us the data.

The authors have declared no conflict of interest.