Wilson disease (WD) is a rare autosomal recessive defect in hepatocellular copper transport found in 3 out of 100,000 people1. It can lead to chronic copper deposition in the liver, brain and other tissues resulting in hepatotoxicity and neuropsychiatric sequelae2. The American Association for the Study of Liver Disease (AASLD) recommends screening for WD in any individual aged between 3 and 55 years with liver abnormalities of uncertain cause, especially those with co-morbid unexplained neurological disorders3. The first step in screening for potential WD is serum ceruloplasmin measurement, as approximately 85 to 90 percent of patients with WD have low serum ceruloplasmin levels4. However, low ceruloplasmin is not specific for WD; it can result from malabsorption, other liver diseases, protein-losing enteropathies, acquired copper deficiency, and hereditary aceruloplasminemia5. Ceruloplasmin is also an acute phase reactant and may be elevated in inflammatory states including WD patients with active hepatitis6. Hyper-estrogenic states including pregnancy or use of the oral contraceptive pill can also increase ceruloplasmin levels as ceruloplasmin mRNA has an estrogen responsive upstream region for its transcription7. Ceruloplasmin levels of less than 0.2g/L have been shown in one study to have a sensitivity of over 98%, specificity of over 55% and positive predictive value of over 48% for the diagnosis of WD on genotype-verified patients8.

However, other research suggests the positive predictive value of ceruloplasmin <0.2g/L when used alone in patients with liver dysfunction may be as low as 5.9%1. For this reason, the guidelines recommend a number of confirmatory tests including a slit-lamp examination for detection of Kayser-Fleischer (KF) rings and 24-hour urinary copper estimation3. Additional investigations may be required for those with indeterminate results including a liver biopsy to determine the hepatic copper concentration or molecular testing for ATP7B mutations9,10. The European Association for the Study of the Liver (EASL) clinical practice guidelines also recognizes the limitations of serum ceruloplasmin measurement as a single test and recommends use of a combination of tests that reflect ‘disturbed copper metabolism’ with a diagnostic scoring system based on their results11. Our study assessed the incidence of low ceruloplasmin levels in the population and the clinical indications for testing. We determined whether further diagnostic testing was performed and what was the clinical significance of these results.

We conducted a retrospective review of all ceruloplasmin measurements at the Cork University Hospital clinical laboratory that serves a large primary care network, specialty clinics, and an 800-bed tertiary neurological and hepatological referral centre between August 2003 and October 2009. The time period was chosen to include the maximum data available. The study was approved by the hospital ethics committee. Clinical data, serum ceruloplasmin, liver function tests, urinary copper and liver biopsy reports were all recorded where available. Nephelometry was the technique used by the referral laboratory for measurement of serum ceruloplasmin during the study period. We treated ceruloplasmin values less than 0.2g/L as potentially positive for WD in accordance with published guidelines3. A diagnosis of WD was determined on the basis of the results of confirmatory testing (urine and hepatic copper, ophthalmologic examinations) and medical record documentation. Genetic testing results were recorded where available. WD heterozygotes were defined as those with only one disease-causing mutation in the absence of other supportive features. Data was analyzed using SPSS version 21.

Demographics of the tested population 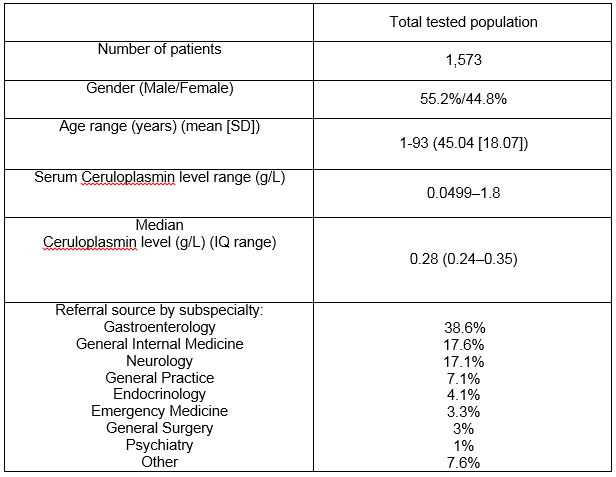 96 patients (male:female = 72%:28%) of the entire cohort (6.1%) had a ceruloplasmin level <0.2g/L (see Figure 1). The most common indications for testing were the presence of liver function test abnormalities (61.5%), a movement disorder (18.8%) and psychiatric disturbances (7.3%). 40.6% of the group were subsequently given a definitive liver disease diagnosis, the most common of which was alcoholic liver disease (14.6%) followed by non-alcoholic fatty liver disease (8.3%). Only 3 of the 96 patients (3.1%) had WD. Two of these patients had been previously diagnosed and were re-tested for disease monitoring. One patient was newly diagnosed with WD during the study period. His elevated 24-hour urinary copper excretion, Kayser-Fleisher rings along with low serum ceruloplasmin level confirmed the diagnosis. All 3 WD patients had a ceruloplasmin < 0.05g/L. In addition, 1 individual presenting with tremor was identified as a WD carrier with a single ATP7B mutation only. His genetic analysis was not consistent with a compound heterozygote and he never developed any further clinical symptoms.

After a positive/suggestive ceruloplasmin result, 27/96 patients (28.1%) had some form of confirmatory testing for WD performed. 14 patients (14.5%) were examined ophthalmologically for Kayser-Fleisher rings. 10 patients (10.4%) had a liver biopsy for hepatic copper quantification. 23 patients (24%) had urinary copper quantification. The mean follow-up period from the time of initial testing was 51.4 months (SD 30.3 months). Non-neurology/gastroenterology subspecialities were significantly less likely to do follow-up investigations. (p<0.01). Only 4 of the 27 patients (14.8%) who had further testing were under the care of the non-neurology/gastroenterology subspecialities.

Ceruloplasmin as a screening diagnostic test

Measurement of ceruloplasmin is often prompted in the evaluation and management of the patient with liver enzyme elevation. In our review of 7 years of ceruloplasmin ordering patterns, we found poor adherence to the AASLD guidelines. A significant proportion of the tested population was outside of the age-range recommended by the AASLD. It is very uncommon to present with Wilson disease after the age of 4012. In a large retrospective review of ceruloplasmin levels in 5023 patients, the number needed to test for late-onset Wilson disease (>40 years of age) to result in 1 new diagnosis was 284713. In many cases, the liver abnormalities were not of uncertain aetiology and more common diseases were not yet out-ruled. Several of those with low ceruloplasmin levels had chronic hepatitis or alcohol-induced liver disease – conditions associated with false positive results secondary to poor hepatic synthetic function1. Less than 30% of the study population had appropriate follow-up investigations for a positive ceruloplasmin result such as ophthalmic examination for KF rings or liver biopsy for copper staining. Ceruloplasmin measurements were requested by a variety of subspecialites, the most common being gastroenterology, neurology and internists. The most common reason for testing was for evaluation of liver enzyme elevation or established liver disease. Physicians who were not gastroenterologists or neurologists were less likely to perform confirmatory investigations (p<0.01). This suggests lack of familiarity from other subspecialities with the diagnostic algorithm of investigations necessary to confirm or exclude WD.

Serum ceruloplasmin measurement with a cut-off level of less than 0.2g/L had a low PPV for WD in our study similar to previously published work1. This relates to the low pre-test probability of the diagnosis in an unselect population with a high prevalence of liver disease with known etiology. Lowering the reference range to 0.14 would have improved the test’s performance without adversely impacting on sensitivity. Greater diagnostic accuracy with this lower threshold has been reported in previous studies with a caveat of local validation necessary8. In this study, serum ceruloplasmin concentrations of less than 0.20, 0.14, and 0.10 g/L showed positive predictive values of 48.3%, 100%, and 100%, respectively, In the validation group, a serum ceruloplasmin threshold of 0.14 g/L rendered 100% sensitivity and specificity. However it is possible that not every patient with WD was captured on the basis of this screening test. As previously mentioned, there may be false negative results for WD in the face of infection or inflammation14. Pregnancy and supplemental estrogen therapy may have a similar impact15. Future test requests/interpretations should take such mitigating clinical factors into account. Method of testing may influence results. Serum ceruloplasmin can be measured enzymatically by its copper-dependent oxidase activity towards specific substrates or by antibody-dependent assays. The latter includes nephelometry, radioimmunoassay and radial immunodiffusion. The results are generally similar, except for the antibody-dependent and the immunodiffusion assays, which may overestimate the ceruloplasmin levels. The overestimation may occur because the two testing methods do not differentiate between apoceruloplasmin (ceruloplasmin unbound to copper) and holoceruloplasmin (ceruloplasmin with its full complement of 6 copper atoms per molecule)16. Nephelometry was the technique used consistently throughout our study period.

There were several limitations to this study. We did not follow up patients who had normal (>0.2g/L) serum ceruloplasmin levels to ensure that they did not subsequently develop WD. Thus we may not have captured the testing characteristics of all affected patients. Our ability to evaluate ceruloplasmin as a diagnostic test was limited as we could only include measurements where definitive confirmatory testing was performed. In addition, it’s possible that the heterozygote carrier we identified did in fact have WD with a less severe phenotype. Given that most WD patients are compound heterozygotes and that there exists many disease-specific mutations, it can be difficult to differentiate a healthy carrier from an affected individual17. Routine screening of all patients is of limited clinical utility and ceruloplasmin should not be used as part of the empiric battery of tests forming the liver screen. More judicious use of ceruloplasmin in a selected population with a higher pre-test probability of Wilson disease may increase its utility as a screening tool. Diagnostic scoring systems such as that proposed by the EASL11 may help risk stratify or contextualize a low serum ceruloplasmin result. There is a clear need for increased education regarding the appropriate indications for ceruloplasmin testing across all referring clinical specialties, but in particular non-neurologist and non-gastroenterology sources. Test performance may improve with locally validated lower reference ranges, guideline adherence and use in a more select population.