Abstract
The aim of this study was to determine the changes in both the short and long term, in the trends within the practice of spinal surgery in Galway University Hospitals (GUH) over a seven year period, January 2005 – January 2013. The absolute number of spinal surgery cases has increased from 147 in 2005, to 257 cases by 2013. Multiple level spine surgery accounts for 51% (131) of all cases by 2013, which is an increase from 31% (45) in 2005. On analysis of the trends within spinal surgery during the study period, a statistically significant  (p<0.05) increase in all aspects of spinal surgery was noted, with the exception of surgeries for single level, lumbar and infection pathology respectively. The average waiting time for lumbar decompression and instrumentation climbed for an average of 1.3 months in 2008 to 12.1 months by 2012.The volume and complexity of spinal surgery has increased during the study period, in the West of Ireland.

Introduction
Since Love1 first describe the diagnosis and treatment for disc protrusion the number and complexity of spinal operations has increased dramatically2,3. Along with this change, the use of instrumentation has also increased in the United States3.In relation to spinal surgery in the West of Ireland, it began in 1953, following the implementation of  Tuberculosis (Establishment of Sanatoria) Act 1945, with the main clinical focus on the treatment of Orthopaedic Tuberculosis (TB) in the region4. Currently GUH acts as a tertiary referral centre for oncological care in the West of Ireland. Since 1994 there has been an orthopaedic surgeon with a specialist training in spinal surgery, and the service for spinal pathology has since developed, with the noted addition of two additional spinal surgeons in 2008 and 2013, respectively. The provision of Orthopaedic surgery underwent a strategic transformation in 2007 in the Galway region, in which an Orthopaedic unit opened on the site of a teaching hospital with a dedicated purpose of the management of trauma and oncology cases. The original base orthopedic hospital was repurposed as a solely elective Orthopaedic hospital, during this change. This reorganisation of resources did not result in an increase in staff or hospital beds, but did result in a single additional operating room or theatre. During this study period, the impact on waiting list for elective spinal procedures was most acutely felt during the years 2011 and 2012 respectively.  Taking lumbar decompression with instrumentation as an example, the average waiting times for this procedure in 2008 was 1.3 months but had reached 12.1 months by 2012, with year-on-year increase in the average waiting time from that time. Similar trend in average waiting times was noted regarding cervical spine decompression over the same period. On this background of increasing waiting times, the cost effectiveness of these surgery has been proven. It has recently been shown by Rampersaud et al5, that the spinal surgery for lumbar pathology has similar outcomes and cost-utility following surgical treatment for osteoarthritis of the hip or knee. These results are complemented by a study by McCarthy et al6, which reveals that surgical treatment for adult spinal deformity is cost-effective after a 10-years. It is clear from the above studies that elective spinal surgery is a cost effective and comparable to lower limb arthroplasty. To date, no academic paper has examined the recent change in spinal practice in the West of Ireland, and it is on this academic background that this research was conducted. The aim of study is to determine the trends within the practice of spinal surgery in Galway University Hospitals (GUH) over a 7-year period, January 2005-2013, to characterise the current practice.

Methods
A retrospective review of all spinal cases conducted in both GUH (Galway University Hospitals) hospitals was recorded for the years 2005, 2006,2008,2009,2012 and 2013 respectively. The cases from these particular years were chosen as to avoid the impact of the bilocation of orthopaedics services in 2007 and in 2011 to allow a similar time period lapse between the collected cases. The authors felt these years would not be representative of the unit activity and would not ultimately alter the overall trend in spinal surgery for the complete period. Theatre Logbooks and clinical notes acted as the primary source of cases preformed during the study period, from both operative sites. Characteristics of the spinal surgery performed where recorded. They included, Anatomical Region, which included cervical, thoracic and lumbar regions. The use of instrumentation and the number of level at surgery was performed was documented. Finally the primary spinal pathology was noted, and included Neoplastic, Degenerative, Deformity, Infection, and Trauma. Multilevel: Single Level ratio, Instrumented:Non Instrumented ratio and Cases: Surgeon ratios were determined for each study year. All data collected was stored on a password-protected computer and collected using Microsoft Excel software. Statistical analysis was performed to determine if any statistical differences existed between the characteristics of spinal surgery during the study period. Statistical analysis was performed using R and Excel Statistical Analysis for graphs. Poisson regression was used for absolute numbers. Chi-squared test was used for trends in ratios. Two-tailed tests used with p value<0.05 considered for statistical significance and demonstrated with ** sign on figures 1 to 4.

Results
Firstly from Figure 1 it is clear that there has been a significant increase in the number of spinal surgery case being performed in both the short and long term in this during the period of this study. As stated previously, during this period there has been neither a change in the number of hospital beds available for the orthopaedic department in the institution nor a change in the surgeon to case ratio. To determine the source of this increase, the anatomical location of the spinal operation was determined. The results show a significant increase in both the absolute number of cervical and thoracic spinal operations throughout each examined period, as seen in Figure 1. 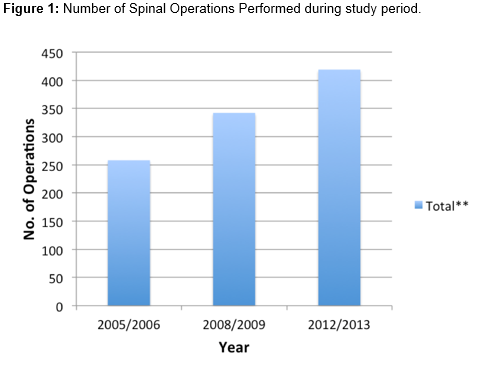 Secondly the rate of instrumentation and non-instrumented case was explored over the same time period. We found a statistically significant increase in the absolute numbers of instrumented cases being performed during the examined period. Interestingly there was a clear trend towards multilevel operations, which is reflected in ratio of cases that have undergone instrumentation, see in Figure 2. 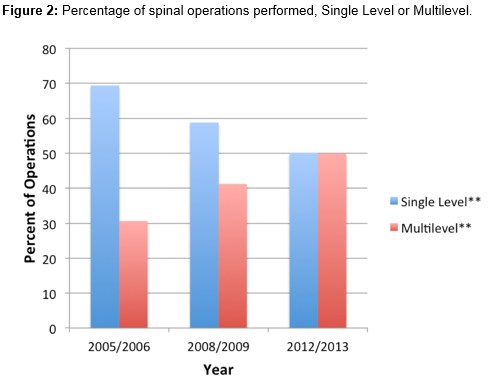 With respect to the aetiology of pathology treated, there has been a significant increase in all, with the exception of spinal surgeries involving infections, as seen in figure 3. 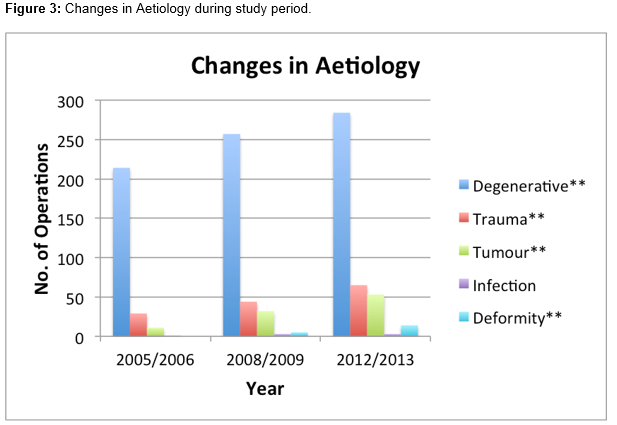 Notably on examination of trend in the ratio of spinal operations for malignancy and spinal deformity have an increased share, with degenerative spinal pathology having a reduced ratio of overall spinal operations case by 2013. Finally on analysis of the trends in spinal surgery during the study period it is clear that there has been significant increase in all aspects of spinal surgery with the exception of single level, lumbar and infection spinal surgeries, respectively, seen in figure 4. 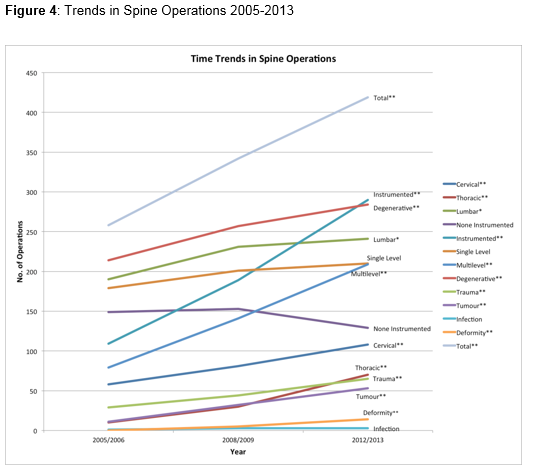 Discussion
The subject of this research was to determine the trends within the practice of spinal surgery in Galway University Hospitals (GUH) over a 7-year period. Firstly the results of the study have displayed a statistically significant increase in the number of spinal surgeries being preformed, with a noted increase in both cervical and thoracic, instrumented cases and multilevel surgeries during this period. As spinal metastatic to the thoracic spine is the most common site of metastatic disease in the spinal column7, it is not surprising that increase also synchronises with increase in oncological cases noted in the same period.  It can also be concluded that a significant increase all aspects of spinal surgery has occurred, with degenerative spinal surgery responsible for less of the ratio of total cases performed. These finding have lead the authors to conclude that the volume and complexity of spinal surgery conducted in GUH for this period has significantly increased. Despite the evident increase in volume of cases performed particularly degenerative aetiologies, it has not contributed to shorter average waiting times for elective spinal surgeries, suggesting overall, demand for these surgeries has also increased. The National Treatment Purchase Fund8 (NTPF) is an independent statutory body established by the Minister for Health, which collects information pertaining to patients waiting for public hospital treatment and facilities treatment in privately funded hospitals in the State and abroad, in an effort to decrease waiting times for patients. In the context of this study, no patient booked for a spinal operation, in this unit, was referred to NTPF, during this study period. It was not possible to accurately determine if the NTFP had impacted on waiting times for those patients awaiting initial consultations for potential spinal complaints, in the outpatient setting.

With the main hypothesis of this study explored in the study, the authors have postulated the following reasons to account for the increase in complexity and volume during the study period. Firstly with the bilocation of Orthopaedic services in 2007, the referral pattern and volume of oncological cases involving the spine changed, with increased referrals beginning accepted. As previously mentioned, GUH acts as a tertiary referral centre for oncological care in the West of Ireland. This population of patients represents high-risk surgical candidates, but with the availability of the HDU and ICU facilities and other medical specialists within the teaching hospital, meant operative intervention could more easily be considered. Secondly and anecdotally, the authors have expressed that efficiency surrounding spinal surgery have improved overtime of this study and may have contributed to its protection from recent fiscal fluctuations. It must also be stated that the addition of second spinal surgeon in 2008 undoubtedly contributed to some of the increase in cases performed. However, this again would have occurred with ever increasing pressure on available theatre time. The change in Orthopaedic trauma services, which is served in the same department, was not explored in this study, and the authors are uncertain of the impact of increased spinal surgery volume on the provision of general trauma services, both of which are conducted in the same theatre space. Currently a National Review of Spinal Surgery provision is in progress in the National Health Service (NHS). Currently England has no pre-existing nationally defined service standards9. This endeavour would undoubtedly provide guidance for potential further developments within these services, and with reference to our own local experience could form the blueprint for future developments within this specialised area of Orthopaedic surgery. In terms of teaching and training, a hallmark of clinical governance, the opportunities provided by the increased volume and complexity of spinal surgery may foster both training and surgical fellowship. Finally with the increase in surgical waiting times despite increased activity in this area, this study may provide information for to help plan for provision services in the future. In conclusion, the study results show the volume or complexity of spinal surgery in the West of Ireland has undergone significant increases. Trends towards multilevel and instrumented spinal surgery is undeniable, despite a background of a stable surgeon to case ratio. Changes are likely driven from increases in oncological and trauma cases being referred to the service, with these particular cases requiring urgent management and likely instrumentation. Based on these results spinal surgery appears to be expanding in the West of Ireland, and should be considered when planning future service provision, teaching and training within this area.